If we fast-forward 900 years after St George's death as a martyr, we find that King Richard I (The Lionheart) adopted St George's cross as a uniform for his soldiers.  A red cross on a white background
was an ideal symbol for king Richard's crusade against Saladin and the
Saracens.

What finalized the St George's cross as England's national flag, was it's adoption by king Henry V during his famous victory over the French at Agincourt in 1415.

One constant theme with St
George is how un-English his connections appear.  For example, like St George, King Richard spent little or no time in England, also king Henry V was often away from England fighting in Europe.
Another example of how slow England was to adopt St George is that all the best middle age pictures and artefacts are from Greece or Russia.  (See above a classic Russian picture of St George and the
dragon with a Cyrillic inscription)

Interestingly, St George
is also the patron saint of Canada, Greece, Portugal, and of course Georgia in Europe (near to his birthplace).  In each case the legend of St George slaying the dragon is part of that country's folklore.
However, England is one of the few countries that does not have a national holiday on its Saint's day. It is no surprise that the Greeks celebrate Agios Georgios (St George) with great festivals. 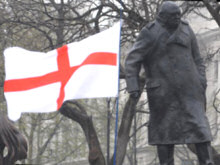 What Will and Guy wonder is why St George's day STOPPED being celebrated in England, because from 1200 - 1700 it was fêted as a feast day.  Even more bizarrely, at
one time pubs could have an extension in England to celebrate St Patrick's day, but not St George's day.

Here below is a rare picture of a contemporary English celebration of St George's day. David Trepess took this photograph at East Hoathly, East Sussex on St George's Day 2007.

The Legend of St George and the Dragon 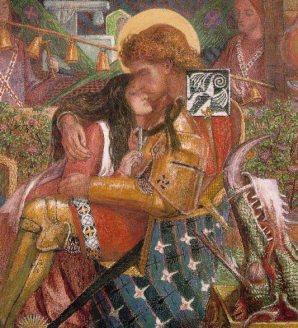 A long time
ago, legend has it that a dragon came down from the mountains and terrorised the cattle and ate the crops.  Moreover, the dragon would not stop his rampage unless the king tied a young maiden to an oak
tree in the centre of the village.

At this point the king's nobles use a pigeon to decide what to do.  If the bird flew to the east then, they must take the King's own daughter Sabra and tie her to a tree, as the dragon
demanded.
According to legend, the pigeon wings off to the east.

Crucially, the pigeon manages to attract the attention of a knight called Sir George and guide him back to the princess.  Right on cue, just as the dragon was about to devour
the princess, Sir George arrives and fights the dragon.  He cunningly slows down the dragon by driving a ball of pitch down his throat, and then follows up by slaying the dragon with a spear, in
traditional style.

By way of thanks for saving his daughter, and the village from the evil dragon, the king pronounced Sir George - Saint George.  Moreover, he gave George a wonderful gold cross to
wear.  Even better, he gave his daughter Sabra's hand in marriage.

Note the dead dragon to be seen in the bottom right corner of Rosetti's famous wedding picture. 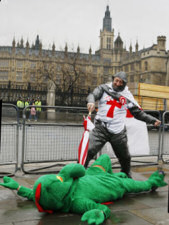 The legend of St George slaying the dragon resurfaces from time-to-time,
especially around St George's day on 23rd April.

Matt goes
into a shop which sells flags and asks for a green union jack.

The shop assistant has to explain to him that you only get union jack flags in red white and blue.

Matt considers for a while, then
decides, 'I'll have a blue one then.'