The Running of the Bulls 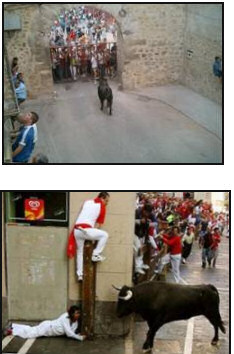 The 'Running of the Bulls' is a practice that involves ordinary people
running in front of bulls that have been released on a set course through the
town's streets which have been cordoned off.

The most famous of these is held in Pamplona [Navarre], northern Spain at the
festival of San Fermìn between the 6th and 14th of July.  Others fiestas are held in
the towns and villages throughout Spain and indeed, in southern France, in
places such as Bayonne.

In this first picture you can observe the bulls from the safety of being
behind a strong metal fence.

The second photo, however, shows a couple of men who have taken no such
safety precautions.

The fellow on the ground is certainly taking his life in his hands and is
hoping that the bull cannot see him. It is a picture of which we can easily ask
the question, 'What happened next?'

A single rocket at precisely 12 noon signals the 'Chupinazo' or opening
ceremony.  The rocket is a signal for people to break open the champagne,
and to don their red scarves.  Although the partying starts on the 6th of
July, no bulls run on this first day of the fiesta.

The Pamplona bull run takes place each morning from 7th to 14th July.
The runners dressed in white with a red handkerchief around their necks assemble
at 7.30am.  For the bull run, the streets are walled off so that the bulls can't escape
into the town.

At 8 o'clock the first rocket signals the opening of the Santo Doming
corral and the six fighting bulls are free to chase the runners.  The
Pamplona bull run is about 800 metres, while El-Guerrouj could cover the
course in under two minutes, most runners take about three minutes from start to
finish.

The Pamplona bull run is punctuated by four rockets:

The Safe Way To Run With The Bulls

As we have explained earlier on this page, every July thousands of
tourists descend on Pamplona in northern Spain for the annual San Fermin
festival made famous by bullfighting aficionado and author, Ernest Hemingway
in his novel "The Sun Also Rises".

Many people, some fuelled by alcohol, traditionally dress in white and
don red neckerchiefs before running through the narrow streets of the old
town chased by a herd of bulls.  Since record-keeping began in 1924, at
least 14 people have been killed during the runs and dozens are hospitalised
each year.

Now, however, Will and Guy have discovered that new software developed by
Navarra firm Proevent now enables those too fearful of bulls with their
razor sharp horns to experience the thrill of running along the one mile
course without risking their lives.

Wearing a headset hooked up to a special treadmill, the player can "join"
computer generated runners flanked by dozens of spectators on a virtual
version of the famous bull run. Digital three dimensional images from the
streets teamed with surround sound serve to replicate the event.  The
prototype technology has been set up in a square in Pamplona and is proving
popular with those practicing for the run as well as those who consider
themselves too old, too unfit or too sensible to attempt the real thing.
Sounds like me, says Will.

History of Running the
Bulls at Pamplona

The history of this Pamplona bullfighting fiesta can be traced back at least
to the
14th century where it started as the religious festival of San Fermin.
However originally the bull run was held in October and only lasted one or two
days.  In the 18th century people started travelling from afar to see the
bull run and join in the festivities.

In the 19th century the fiesta was moved to 6th of July when the weather was
better.  Perhaps it was Ernest Hemingway through his novel 'The Sun Also
Rises' that created the intrigue, and the reason whey people now come from over
the world for the Pamplona running of the bulls.

Over the years at least 10 people have lost their lives by being gored in the
actual bull run, and hundreds have been seriously injured.  The running of
the bulls at Pamplona is an interesting battle between on the one hand the
historical and the commercial interests, and on the other hand, the health
and safety brigade.  As the years go by it's fascinating to see which side
will gain the upper hand.