Regarding the England match against Argentina; it is being said that
Jonny Wilkinson is passed his best because he missed more penalties than the
England football team.

A New Zealand fan was watching the Rugby World Cup final.  In the
packed Eden Park stadium, there was only one empty seat - right next to him.

'Who does that seat belong to?' asked Shaun from the row behind.
'I
got the ticket for my wife,' replied Patrick.

'But why isn't she here on this special occasion?'
'I'm afraid she
died in an accident.'

'So you're keeping the seat vacant as a mark of respect,' said Shaun.
'No,' said Patrick, 'I offered it to all of my friends.'

'So why didn't they take it,' asked a puzzled Shaun.
'They've all
gone to her funeral.'

Question:  What do you call an Englishman with the
World Cup in his hands?

The Pope and British Rugby Fans

The Pope was cruising along the beach near Christchurch in the Pope-mobile when there was a
frantic commotion just off-shore. A helpless man, wearing an English rugby
jersey, was struggling frantically to free himself from the jaws of a 30
foot shark. 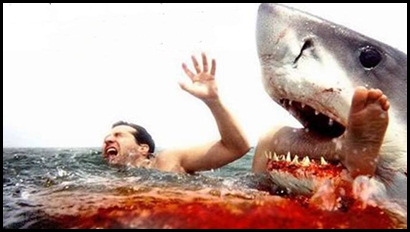 As the Pope watched in horror, a speedboat pulled up with three men
wearing Welsh, Irish and Scottish rugby jerseys.  The Scotsman quickly fired a harpoon
into the shark's side while the other two reached out and pulled the hapless
English fan from the water. Then, using long clubs, the three beat the shark
to death and hauled it into the boat.

Immediately the Pope shouted and summoned all three to see him, 'I give you my
blessing for your brave actions. I heard that there were some bitter hatred
between the Celts and England rugby fans, but now I have seen with my own
eyes that this is not true.'

As the Pope drove off, the harpooner asked his mates, 'Who was that?'

'It was the Pope,' one replied. 'He is in direct contact with God and has
access to all of God's wisdom.'

'Well,' the harpooner said, 'he may have access to God and his wisdom,
but he doesn't know anything about shark fishing. Is the bait holding up OK?
Or do we need to get another Englishman?'

Martin Johnson takes the English team out for training and tells
everyone to assume their normal position.

So they all go and stand behind the goalposts and wait for the
conversion.

The All Blacks were playing England, and after the half-time whistle blew
they found themselves ahead 50-0, Jonah Lomu getting eight tries. The rest
of the team decided to head for the pub instead of playing the second half,
leaving Jonah to go out on his own.

'No worries,' Jonah told them, 'I'll join you later and tell you what
happened.'

After the game Jonah headed for the pub where he told his team mates the
final score: 95-3.

'What!" exclaimed a furious Michael Jones. 'How did you let them get
three points?'

Jonah replied apologetically, 'I was sent off with 10 minutes to go.'

Craig Joubert, the rugby referee died and went to heaven.

Stopped by St Peter at the gates he was told that only brave people who
had performed heroic deeds and had the courage of their convictions could
enter. If he could describe a situation in his life where he had shown these
characteristics, he would be allowed in.

''Well,' said Mr Joubert, 'I was controlling a game between New Zealand
and England in the World Cup Quarter-Final.'

England were two points ahead with a minute to go.  Chris Ashton
made a break, passed inside to Johnny Wilkinson.   We was driven
on by his forwards, before he passed out to Mike Tindall who went over in
the corner. But Tindall dropped the ball before he could ground it.  As
England were clearly the better side all game, I ruled that he had got it
down and awarded the try without calling for the video ref.'

'OK, that was fairly brave of you, but I will have to check it in the
book,' said Peter, before disappearing to look it up.  When he came
back he said, 'Sorry, there's no record of this.  Can you help me to
trace it? When did all this happen?'

Craig Joubert looked at his watch and replied, 'Forty-five seconds ago at
the West Stand end.'

A Quick Guide on How to Understand New Zealanders

The family of Auckland Blues Rugby supporters head out shopping one
Saturday before Christmas. While they were in a sport's shop, the son picks
up a Crusaders rugby jersey and says to his sister, 'I've decided I'm going
to be a Crusaders supporter and I'd like this jersey for Christmas.'

The sister is outraged at this, promptly whacks him round the head and
says, 'Go talk to your mother.'  Off goes the little lad, with Crusaders jersey in hand and finds his
mother. 'Mum ?'

'I've decided I'm going to be a Crusaders supporter and I'd like this
jersey for Christmas.'

The mother is outraged at this, promptly whacks him round the head and
says, 'Go talk to your father.' Off he goes with the Crusaders jersey in hand and finds his father,
'Dad?'

'I've decided I'm going to be a Crusaders supporter and I would like this
jersey for Christmas.'

The father is outraged at this, promptly whacks his son round the head
and says, 'No son of mine is ever going to be seen in THAT!'

About half an hour later, they are all back in the car heading home. The
father turns to the son and says, 'Son, I hope you've learned an important
lesson today?'

The son turns to his father and says, 'Yes, Father, I have.'

Father says, 'Good son, and what is it?'

The son replies, 'I've only been a Crusaders supporter for an hour and
already I hate you Auckland b*****ds.'

During a South Africa v Australia match at Newlands Stadium lightning
storm hit Capetown and a bolt was conducted through the towers to the touch
line.

In a tragic accident coaches, Robbie Deans of the Wallabies and Peter de
Villiers of the Springboks were killed.

They were taken straight to heaven where they were warmly greeted by the
Almighty.

After a while, Robbie was taken to his new accommodation. He was pleased
to find a lovely Aussie-style cottage with statues outside in the form of
Aussie rugby greats.

As a constant background he could hear the sweet voices of angels singing
"Go Wallabies Go" and "Waltzing Matilda."

Robbie was delighted until he suddenly heard some even more beautiful
singing coming from the top of the hill.  He listened closer and could hear "Nkosi sikelel' iAfrika.'

Robbie looked up the hill to see a great palace with statues outside of
Francois Piennar, Victor Matfield, and John Smit.

A party was taking place in the garden with Castle ales flowing freely as
the crowd watched Bryan Habana scoring another great try at Newlands.'

Robbie went to the Lord and said, 'Look, I don't want to appear
ungrateful - my cottage is great, but why does Peter get the huge mansion?'

God broke into a laugh as he replied, 'Robbie, you've got it all wrong.
That's not Peter's place - it's mine.'

A major rugby tour by the British Isles to New Zealand is a cross between
a medieval crusade and a prep school outing. - John Hopkins

See a modern insight into the rugby world cup 2011.

Snow White was returning from Merthyr to the
cottage in the woods
where she lived with the 7 dwarfs.  In the distance she could
see black smoke, then as she got nearer she realized that their cottage had
burnt down.

On hearing these chants, Snow White gave a little sigh of relief - she
knew that at least Dopey was safe.

After JPR Williams was involved in a road traffic accident: Typical,
isn't it?  The car's a write-off. The tanker's a write-off. But JPR
comes out of it all in one piece. - Gareth Edwards

Quotations
from the Rugby World Cup and other Important Occasions

Some of these quotes are from the Rugby World Cup, others are by famous
internationals.

Q: What do call an Frenchman holding a bottle of champagne after the
Rugby World Cup Final? 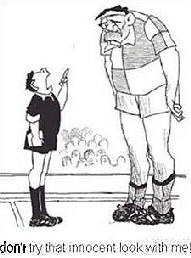 Will and Guy have been debating the dearth of players' nicknames.  Is
it just two old-timers with selective memory, or are there really fewer
nicknames today?  Could it be that a combination of teams not drinking
together, coupled with a fear of being labelled *xyz_ist have surpressed
nicknames?  Please prove us wrong and send us interesting nickames of
modern players.

* Where xyz could be race, age, or other form of discrimination.

The situation with International nicknames is different, it seems that
every nation has at least one shortened name to fire up its fans, and to
increase the commentators vocabulary.

Countries that appear not to have real nicknames: England, Scotland,
Ireland.  Perhaps you know better?

Will has heard England referred to as "The Red and Whites" but it is not
a common nickname.

Scotland is known in some quarters as "Rob Roy's Army". The "Tartan Army"
tends to refer to the Football team.

Ireland may be called "Paddy's Army"

The owner of a bar in Wanaka is holding a competition to find the 'perfect woman', the prize is $NZ 1,000 and tickets for a rugby game.

Amongst the tasks the
candidates will be expected to undertake
are: