India became independent from the British Rule on 15th August, 1947.
However, the country did not realise its own constitution until 26th January
1950. 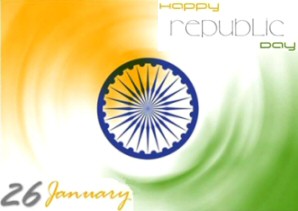 Republic Day is one of the three national holidays of India and the
greatest festival celebrated in the country.  It is celebrated every year on
26th January, in New Delhi with great pomp, fanfare and pageant. While in
the capitals of the States and other headquarters, it is marked with
patriotic fervour. 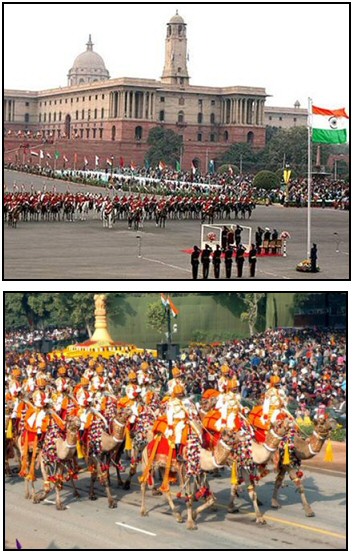 The most spectacular celebrations are marked by the Republic Day Parade
that takes place in the capital of New Delhi at Rajpath.

It includes march past of the three armed forces, massive parades, folk
dances by tribal folk from different states in picturesque costumes marking
the cultural unity of India.

Furthermore, the streak of jet planes of Indian Air Force, leaving a
trial of coloured smoke, marks the end of the festival.

To
mark the importance of this occasion, every year a grand parade is held in
the capital, New Delhi, from the Raisina Hill near the Rashtrapati Bhavan
(President's Palace), along the Rajpath, past India Gate and on to the
historic Red Fort.

The different regiments of the Army, the Navy and the
Air Force march past in all their finery and official decorations.

The President of India who is the Commander-in-Chief of the Indian Armed
Forces, takes the salute.

Floats exhibiting the cultures of the various states and regions of India
are in the grand parade, which is broadcast nationwide on television and
radio. Also part of the parade are children who win the National Bravery
Award for the year. The parade also includes other vibrant displays and
floats and traditionally ends with a fly-past by Indian Air Force jets.

Will and Guy's Favourite Top Ten
Trivia About India

As Ever, Will and Guy Cannot Resist A Little Indian Humour