Have you ever found yourself lost for words only to replay the conversation in your mind later and think, 'Now I wish I had said that!'
? The French have a phrase for it: L'
Esprit d'escalier - 'The spirit
that passes on the staircase'.

Some people have a gift that allows them to respond to other people remarkably quickly and often with humour.

It's
so clean out here. [Los Angeles]
That's
because they don't
throw their garbage away. They turn it into television
shows: Woody Allen

I liked your opera.  Perhaps I will set it to music: Mozart

About a play at the
theatre:
There was a good bit about half way through when we all ate ice-cream.

Blackadder to his servant Baldrick taken from the TV series:
Ah - it's
time for us to meet our maker - in my case God, in
your case, God knows.

God is supposed to have made man in his own image. It would be a great shock to Christians everywhere if God looked anything like you, Baldrick.

Funny Put Downs from comedians
who are being
heckled on stage:

a) Comedy is my job. you're interrupting; do you want me to come round your work tomorrow and hide your broom?

b) Isn't
it a school night?

c) Don't
clap on your own; someone will throw you a
fish.

e) Classic audience reply
Comedian 'Who the **** do you think you are walking out?'
Member of the Audience:
'Actually, I am a talent scout'.

From the Armed Services
References:

a) He would be out of his depth in a car park puddle.

b) A room temperature IQ.

c) This young lady has delusions of adequacy.

d) She sets low personal standards and then consistently fails to achieve them. 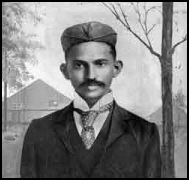 When Gandhi was studying law at the University College of London, a white
professor, whose last name was Wilson, disliked him intensely and always
displayed prejudice and animosity towards him.

Also, because Gandhi never lowered his head when addressing him, as he
expected ... there were always "arguments" and confrontations.

One day, Professor Wilson was having lunch at the dining room of the
University, and Gandhi came along with his tray and sat next to the
professor. The professor said, "Mr Gandhi, you do not understand. A pig and
a bird do not sit together to eat."

Gandhi looked at him as a parent would a rude child and calmly replied,
"You do not worry professor. I'll fly away," and he went and sat at another
table.

Professor Wilson, reddened with rage, decided to take revenge on the next
test paper, but Gandhi responded brilliantly to all questions. Professor
Wilson, unhappy and frustrated, asked him the following question. "Mr
Gandhi, if you were walking down the street and found a package, and within
one was a bag of wisdom and another bag with a lot of money, which one would
you take?"

Without hesitating, Gandhi responded,"The one with the money, of course."

Professor Wilson, smiling sarcastically said, "I, in your place, would
have taken the wisdom, don't you think?"

Gandhi shrugged indifferently and responded,"Each one takes what he
doesn't have."

Professor Wilson, by this time was fit to be tied. So great was his anger
that he wrote on Gandhi's exam sheet the word "Idiot" and gave it to Gandhi.
Gandhi took the exam sheet and sat down at his desk trying very hard to
remain calm while he contemplated his next move.

A few minutes later, Gandhi got up, went to the professor and said to him
in a dignified but sarcastically polite tone, "Professor Wilson, you signed
the sheet, but you did not give me the grade."

She - Actually I'd rather have the money.

Gossip columnist Earl Wilson: 'Have you ever been mistaken for a man
on the telephone?'

A
Miscellany of Funny Put Downs: