These polar bear pictures
were taken on the western side of Hudson Bay at Churchill, Manitoba, Canada.
Thanks to John, one of our readers, we have identified the photographer as
Norbert Rosing.

Trepidation As the Bear Approaches the Huskies

Polar bear and husky
get to know one another

Let us remember that polar bears are confined to the north pole.  As for
the Huskies, there are several distinct breeds originating from Canadian, Alaska, Greenland and Russia.  However, we believe that the dogs featured here maybe Siberian Huskies.

Will created this great PowerPoint Presentation for your enjoyment: 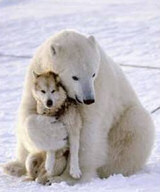 How to Create a Great PowerPoint Presentation

Making presentations in PowerPoint is satisfying, moreover, it's easy to get
started.
The PowerPoint program is intuitive to learn and easy to create your own PPT
slides and build them into a slide show.  If you have
Microsoft Office you may find that you already have PowerPoint along with Word
and Excel.

One way to begin is simply to open any example presentation.  Just
download one of our free PPT files and open it with PowerPoint.  As you examine the slides, so it will become obvious how
to add pictures and titles, if you do get stuck, ask the wonderful built-in 'Help'.  To
make a great slide show requires these skills; 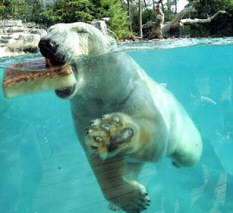 From one extreme to another.  Poor polar bears overheating in summer.  As Europe swelters in the heatwave zoo-keepers have been trying hard to look after their animals.  At Zurich zoo
animals have been fed a diet of frozen berries, meat and bones to help them stay cool in the intense summer heat.

The 'alternative ice cream' offered to animals instead of their usual fare has been a big
hit with large cats, apes and wolves, Zurich Zoo said in a statement. 'The ice cream should at least offer the animals a temporary way to cool down.'

A polar bear enjoys a mackerel-flavoured
ice cube at La Fleche zoo, western France. The snack is one way for the animals to keep cool.

To go off at a tangent, 'Polar bear ice-cream' reminds me of the old tale of feeding penguins to the polar bear.

See what happened when a joker fed 8 penguins to the polar bears.