Happy Christmas From Will and Guy

How to Create a Christmas PowerPoint Presentation

Creating PowerPoint Presentations is satisfying, moreover, it's easy to get
started making your own PPT slides and building them into a presentation.
The whole PowerPoint program is intuitive and easy to learn.  If you have
Microsoft Office you may find that you already have PowerPoint along with Word
and Excel.

One way to begin is simply to open any example presentation.  Just
download one of our free PPT files and open it with PowerPoint.  As you examine the slides, so it will become obvious how
to add pictures and titles, if you do get stuck, ask the wonderful built-in 'Help'.  To
make an Christmas slide show requires these skills;

Polar bears are only found at the north pole.  As for
the Huskies, there are several distinct breeds originating from Canadian, Alaska, Greenland and Russia.  However, we believe that the dog
pictured here is a Siberian Husky.
See another PowerPoint
Presentation featuring 'Polar Bear Meets Huskies' 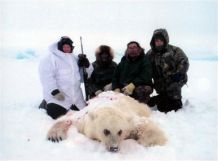 Here is a poor Polargrizz, he is a cross between a grizzly bear and a polar bear.
Experiments confirmed that a bear killed by an Inuit in Canada's
far north was the first Grizzly-Polar bear cross ever discovered in the wild.

The National Post reported: 'Everybody thought it was a Polar bear, and
then they started looking more and more and they seen other features that resembled some of a Grizzly as well.'

The bear had thick, creamy white fur, typical of Polar bears, but its long claws, humped back
and shallow face, as well as brown patches around its eyes, nose, back and on one foot are Grizzly traits.
See more on PolarGrizz

Well finally, it's goodbye from Will and Guy,

Have a great Polar Bear Christmas from him.