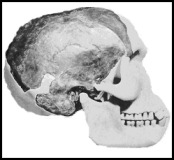 Almost every branch of science has its hoaxes and fakers.  Here are Will and Guy's collection.

Perhaps the most famous hoax was Piltdown man.  In 1912, at a time when Darwin's evolutionary theory was new, and people were looking for missing links between humans and apes, someone planted two fake skulls which came to be known as Piltdown Man. The part medieval man, part Orang-utang fossil was found, in the very English village of Piltdown in Sussex.  Piltdown man's scientific name, Eoanthropus dawsoni, reflected its finder's name Dawson.  To get a flavour of those times, the British Empire was still riding high, and Germany had their Heidelberg man fossil, Britain was desperate for a more important 'missing link' between man and monkey. For 40 years Piltdown man was literally put on a pedestal and worshipped but not rigorously examined. The hoax lead a charmed life until it was unmasked in 1953. Microscopic examination, X-rays, or carbon dating would have exposed the fraud the impostor much earlier. 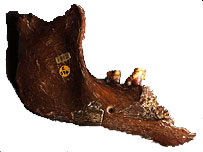 Urban myth has it that the fraud was only exposed when a cheeky first year student said to the Professor, 'That skull looks just like an ape's jawbone in a human skull' .  When the Professor said, 'Don't be so silly', the pupil said, 'Look, you can even see where someone has filed down the molars to make them fit the jaw'.  The student was of course quite correct.

Piltdown Forgery - Who Did It?

What makes the Piltdown fraud so interesting is that the hoaxer was never exposed, certainly during their life time.  Much like horses at the nearby Plumpton race track, a whole field of suspects has been assembled for the hoax of the 20th century.  The most exotically named candidate is Pierre Teilhard de Chardin, a friend of Dawson and later a Jesuit priest.  One of the outsiders in the betting is Sir Arthur Conan Doyle, the creator of Sherlock Homes, he came into the frame because he lived in Sussex. Others runners, who have their backers, are Dawson's friend Smith Woodward, also Sir Grafton Elliot Smith. Lately, there has been speculation that Martin Hinton was the forger as similar material was found in his loft. My favourite candidate to be the hoaxer is Dawson whose archaeological dig discovered the fossil.  Dawson was an antiquarian, therefore had access to medieval skeleton's from which to build the two fraudulent skulls known as Piltdown I and Piltdown II.  In an attempt to make the skull rust as if with age, someone had cooked it in an iron solution.  Dawson had the knowledge of chemistry needed to age the unusually thick skull so that it looked like a fossil. For me the main reason for singling out Dawson, is that he had other skeletons in his cupboard.  Investigation shows that Dawson had dodgy form as the faker of other fossils, old letters indicate that the man seemed obsessed with the 'big find'. My bet is that on the 18th of December 1912 the Piltdown Man hoax was Dawson's crowning glory. 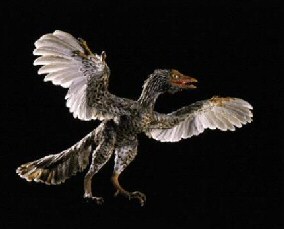 In 1999, the National Geographic magazine published an account of discovery that "proved" birds had evolved from dinosaurs.  The fossil was named Archaeoraptor, and was discovered in China.   At once the fossil was hailed as the missing link in the chain that connects dinosaurs to birds. As you can see in the reconstructed image, the creature has primitive arms of a bird and the tail of a dinosaur.  It was claimed that "This fossil is perhaps the best evidence since Archaeopteryx that birds did, in fact, evolve from certain types of carnivorous dinosaurs". What actually happened was a Chinese farmer glued two separate fossils together and sold the result to a fossil dealer. It found its way to Stephen Czerkas, a dinosaur enthusiast with no scientific qualifications, who contacted paleontologist Philip Currie. Currie would later said it was "the greatest mistake of my life." The term "Piltdown Chicken" was coined by Discovery Magazine, the epithet is derived from Piltdown Man, an artificial composite of a human skull and an ape jaw "discovered" in 1912 . Just as earlier paleontologists embraced Piltdown Man because they were dying for evidence of human evolution, contemporary scientists embraced Archaeoraptor because of their desperation to prove that birds evolved from dinosaurs. 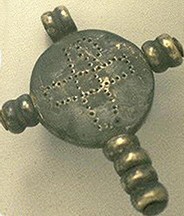 In September 2008 a silver cross which had been regarded as one of the most important early Christian artefacts found in Britain, has been exposed as a modern fake.  The cross is small, measuring only 4.5 cm by 4 cm, you can see a magnified picture of the amulet to the right. Significance of Chi-Rho Who ever created the amulet engraved the first two letters of Christ's name in Greek.  Whether the letters X and P were engraved in the 4th century or the 19th century is the crux of the debate. This combination of Greek letters is well known and is called Chi-Rho. Its significance is that it stands for the Greek word Christos meaning, 'The Anointed One'. Excavation and Detection Dr Matthew Ponting, from the University of Liverpool, carried out tests and the results revealed that the silver used to make the cross dated from the 19th century origin.  Further analysis discovered that as with many forgeries, the Chi-Rho inscription comes from two sources. Further detective work indicates that the amulet was copied from a genuine Roman brooch presented to the British Museum in 1954, implying a degree of specialist knowledge.  Incidentally, this was the year after the Piltown Man forgery was exposed, indeed there are a number of parallels between the two mysteries. Who Dunit? The finger of suspicion points to protesters who opposed construction of a warehouse on the site beside the Fosse Way, an Ancient Roman road. One possible motive being that a significant archaeological find would delay, the construction while he protest gained strength.  When the amulet was discovered in Shepton Mallet, England in 1990, it had a lasting effect on the community, for example a street was named after it. Moreover, the town presented a replica to Archbishop George Carey, who wore it during his enthronement ceremony at Canterbury in 1991. It was Quentin Hutchinson who discovered the amulet, while its authenticity was questioned almost immediately. few people believe that Mr Hutchinson planted the 'ancient' amulet.  Stephen Minnitt, acting head of the Somerset museum service, has appealed for the faker to come forward.  He reassured who ever planted the hoax amulet that the have not committed a crime. 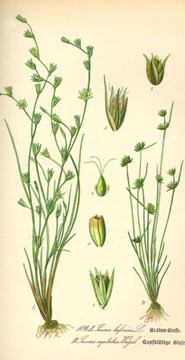 Professor Harrison proposed a theory in the 1940s that the Ice Age had never reached the Outer Hebrides, consequently alpine plants had survived untouched by the ice age elsewhere.  Quite frankly, the idea that Quaternary glaciation was incomplete and that 'relict species' remained on Rhum was, and is, a barking mad theory.  However the botanical community had to sit up and take notice when Professor Harrison found plants on the island of Rhum which occur in the Alps, but not on mainland Britain. Two of the earliest finds were Carex bicolor and the rush Juncus capitatus.  Because of the eminence of the Professor, few people dared speak out publically and deride his theory.  R.B Cooke who saw the 'finds' noted that some of the specimens looked wilted, and the ground around the plants looked marked as thought the roots had been disturbed recently.  Another puzzle was why the plants were only found in one area, when there were numerous other similar areas with no specimens of Carex bicolor and the rush Juncus capitatus. It was left to John Raven to openly question the veracity of Professor Harrison's claim, and it was he, John Raven, who was instrumental in exposing the Rhum Affair as a hoax.  As usual in these cases, Raven was decried as a troublemaker at first, an only praised for exposing the hoax when more and more people reviewed the evidence. This saga is a much about exposing how the botanical elite closed ranks in the 1940s, 50s and 60s, as it is about suddenly unearthing a hoax. There have been clues about 'problems' with the Carex bicolor discovery from the outset.  Clapham, Tutin and Warburg (CTW), the bible for identifying British plants, writes this coded entry in 1952, 'Carex glacialis and Carex bicolor have been recorded from the Island of Rum, Inner Hebrides'.  The use of the word 'recorded' translates to: 'We don't really believe there are any true specimens there', even more telling, CTW quietly drop Carex bicolor from the book's index.

Great hoaxers can be categorised into two groups, those who fake because they can, and those who fake because they must.   Professor John Heslop Harrison would be one was driven to faking because he wanted to prove his theory that the Ice Age never touch Rhum. Art forgers usually fall into the category of those who can.  They try painting in the style of their favourite master, then they get tempted to pass of their copies as his originals.

Footnote: Please send us your hoax, especially if it's as good as the Piltdown Man saga.