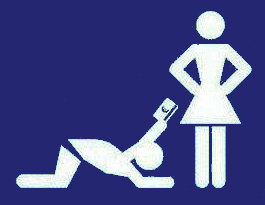 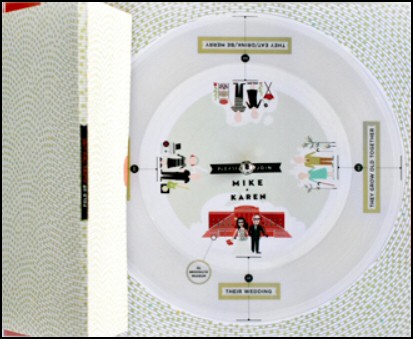 What is this? The above picture shows a vinyl record made by artist and designer Kelli Anderson for her friend.  The invitation is rudimentary record player which guest could spin with a finger.

A Bicycle Made for Two? 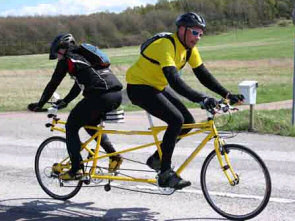 The Secrets to a Happy Marriage

Will and Guy have long suspected that two holidays a year, meaningful conversation twice a week and cuddles eleven times in a fortnight are among the secrets to a happy marriage and now a study has shown it to be true. Recent research among 2,000 happily married couples has identified the main ingredients for successful unions write Will and Guy.  It indicates quite clearly that couples benefit from taking a short break away together twice a year and eating out in restaurants at least three times a month. Furthermore, it pays to be affectionate, as wedded folk tend to share a lingering kiss six times a week, and say 'I love you' up to nine times a fortnight. However, the research points out that it doesn't need to be sweetness and light the whole time; as the average happy couple has at least one healthy argument a week. The survey also shows that while couples like to have drinks at the pub together three times a month, there will also be a couple of girls and boys nights as well, where people can enjoy a night out with friends instead of their other half. Happily married couples tend to make time for at least five movie nights at home, in contrast to their usual evenings spent fighting over the remote control or disagreeing about what to watch. Also we can state that most men and women will make little romantic gestures - such as cooking a nice meal, or taking their spouse a cup of tea in bed - three times a month. Interestingly, falling in love with a partner on first sight is NOT indicative that a relationship is meant to be, as only 42% of happy couples say this was the case. As we have recognized for many years it is friendship that is important, as 47% of those people polled say they were friends with a partner before they became an item, and then eventually married. Other contributors to a successful marriage include making quality time for each other (50%), supporting each other (49%) and being kind (39%). A fifth of couples make a point of never going to bed on an argument, and 21% say the key to a happy marriage is to try to turn a blind eye to irritating habits. Knowing when to say sorry is a big step in the right direction for 33% of people, while 35% claim to be happy because they share the household chores out equally. Compromising on the television schedule, being honest, retaining a degree of secrecy and accepting each other's faults all play a part in a happy marriage. Having just researched this item, Will is now going to leave his office and go to the kitchen and prepare the evening meal for his wife. Footnote: Please send us your marriage one-liners and jokes