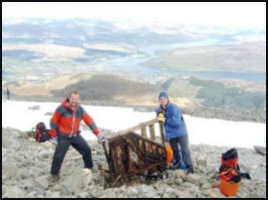 Standing at 1,344
metres high (or 4,408 feet) Ben Nevis is the highest mountain in the British Isles. A volunteer squad of litter collectors from the John Muir Trust decided to undertake a clean-up of Ben Nevis, they found a
rather unusual piece of litter under a cairn at 4,000ft - the remains of a piano.

Nigel Hawkins, the trust's
director, told The Scotsman newspaper '
Our guys couldn't
believe their eyes. At first they
thought it was just the wooden casing - but then they saw the whole cast-iron frame complete with strings.'

Last night the musical mystery may have been solved after Kenny Campbell, a veteran charity fundraiser,
told The Scotsman the '
piano'
was probably an organ he carried to the top in 1971.

Mr Campbell recalled how he single-handedly carried the 226lb organ up Ben Nevis and then played Scotland the Brave on it.
The feat earned him a place in the Guinness Book of Records. This story was verified by a telephone caller to the BBC Radio 5 Drive programme who told Peter Allen that he had seen the climber in 1971 with the
piano and had photographed him

The same year he had pushed a piano to 1,000ft before it dragged him over a ledge. Mr Campbell, from Bonar Bridge in Sutherland, has also carried a plough, a gas cylinder and a
barrel of beer to the summit to raise hundreds of thousands of pounds for charities. He is planning a new stunt for his 65th birthday this year.

Over the years a number of unusual objects have ascended the
ben. In 1911 an Edinburgh motorist, Mr Henry Alexander jnr, drove his family's
20-horsepower Ford Model T up the pony track.

In the same year a Fort William man pushed a wheelbarrow to the summit. In 1981 a
group of Glasgow University medical students pushed a bed to the top.

Have you heard about the musician who leaves a message for his wife: Gone Chopin, [have Liszt], Bach in a Minuet.

What do you get when you drop a piano down a mine shaft?
A flat
minor.

What do you get when you drop a piano on an army base?
A flat major.

Little Ben came into the house with a new harmonica.

'Grandpa, do you mind if I play this in here?'

'Of course not, Ben. I love music. In fact, when your Grandma and I were young, music saved my life.'

'Well, it was during the famous Johnstown flood. The dam broke, and when the water hit our house, it knocked it right off the foundation. Grandma got on the dining room table and floated
out safely.'

'Me? I accompanied her on the piano!'

Doctor Sims has come to see one of her patients in St Mary's Hospital, Copnor, Portsmouth. Louise, the patient has had major surgery to both of her hands.

'Doctor,' says Louise excitedly and dramatically
holds up her heavily bandaged hands. 'Will I be able to play the piano when these bandages come off?'

'I don't see why not,' answers Doctor Sims.

'That's strange,' says Louise. 'I wasn't able to play it
before.'

Wasn't it John Masefield who wrote:-
"I must go down to the sea again;
the E flat's much too high!"

A pianist and singer are rehearsing 'Autumn Leaves' for a concert and the pianist says, 'OK. We will start in G minor
and then on the third bar, modulate to B major and go into 5/4. When you get to the bridge, modulate back down to F# minor and alternate a 4/4 bar with a 7/4 bar. On the last A section go into double time and
slowly modulate back to G minor.'

The singer answers, 'Crikey, I don't think I can remember all of that.'
The pianist replies, 'Well, that's what you did last time.'

'Haven't I seen your face before?'
Judge Cleary demanded, looking down at the defendant.
'Yes, you have, Your Honour,' the man answered hopefully. 'I gave your son piano lessons last winter.'
'Ah, yes,' recalled Judge Cleary. 'Twenty
years!'