Funny Comments: Out of the Mouth of Babes

Cream loses its magic Little Michael watched, fascinated, as his mother smoothed cold cream on her face.' Why do you do that, Mummy?' he asked 'To make myself beautiful', said his mother who then began removing the cream with a tissue 'What's the matter?' asked little Michael, 'Giving up?' Charity Begins at Church After the church service, seven year old Brian said to the preacher: 'When I grow up, I'm going to give you some money.' 'Well, thank you', the preacher replied, 'but why?' 'Because my daddy says that you're one of the poorest preachers we've ever had.' The Chase Nicola, eight years old, told her parents that David Parsons had kissed her after lessons. 'How did that happen?' asked her mother.' It wasn't easy, 'admitted the young lady, 'but three girls helped me catch him.' Repeat after Me Mrs Johnson invited some people over for supper. At the table, she turned to their seven year old daughter Martha and said, 'Would you like to say the blessing?' 'I wouldn't know what to say, 'Martha replied.' Just say what you hear Mummy say, 'Mrs Johnson answered. Martha bowed her head and said, 'Lord, why on earth did I invite all these people to dinner?' Fig Leaves Bobby, nine, opened the big and old family Bible with fascination, and looked at the old pages as he turned them. Suddenly, something fell out of the Bible, and he picked it up and looked at it closely. It was an old leaf from a tree that had been pressed in between the pages. 'Hey, Mum, look what I've found!' Bobby called out.' What have you got there, dear?' his mother asked. Astonishment written all over his face, he answered: 'I think it's Adam's suit!' Road Hog

One day I was driving with my five year old daughter Alice and I honked my car horn by mistake. Alice turned and looked at me for an explanation. I said, 'I did that by accident'. Alice replied, 'I know that, Daddy'. I replied, 'How did you know?' She said, 'Because you didn't say 'IDIOT' afterwards' Home Alone Our new neighbour asked the Hannah, aged 4 and who lived next door if she had any brothers and sisters. She replied, 'No, I'm the lonely child.' 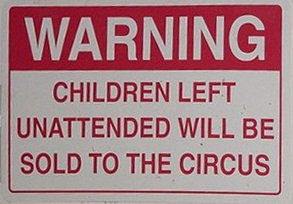 One Way to Explain the Word 'Marriage' to a Child

Claire was a typical three year old: pretty, friendly, cute, inquisitive, and bright as a sixpence. However, one day, Claire showed some difficulty in grasping the concept of marriage. Robert, her father, thought the best way to teach her was to show her his wedding photo album believing that visual images would help Claire's understanding. One page after another, he pointed out photographs of the bride arriving at the church, the entrance, the actual wedding ceremony, the signing of the licence and the reception afterwards. 'Now do you understand, darling?' Robert enquired smiling. 'I think so,' responded Claire dutifully, 'and is that when mummy came to work for us?' Out of the mouths ....

Out of the Mouth of Babes

Teacher: Maria, go to the map and find North America. MARIA: Here it is. Teacher: Correct. Now class, who discovered America? CLASS: Maria. Teacher: Why are you late, Frank? FRANK: Because of the sign.. Teacher: What sign? FRANK: The one that says, 'School Ahead, Go Slow.' Teacher: John, why are you doing your math multiplication on the floor? JOHN: You told me to do it without using tables. Teacher: Glenn, how do you spell ' crocodile?' GLENN: K-R-O-K-O-D-I-A-L' Teacher: No, that's wrong GLENN: Maybe it is wrong, but you asked me how I spell it.

Teacher: Donald, what is the chemical formula for water? DONALD: H I J K L M N O. Teacher: What are you talking about? DONALD: Yesterday you said it's H to O. Teacher: Winnie, name one important thing we have today that we didn't have ten years ago. WINNIE: Me! Teacher: Glen, why do you always get so dirty? GLEN: Well, I'm a lot closer to the ground than you are. Teacher: Millie, give me a sentence starting with ' I.' MILLIE: I is... Teacher: No, Millie..... Always say, 'I am.' MILLIE: All right...'I am the ninth letter of the alphabet.' Teacher: Now, Simon, tell me frankly, do you say prayers before eating? SIMON: No sir, I don't have to. My Mom is a good cook.

More Utterances...Out of the Mouth of Babes

Teacher: Clyde, your composition on 'My Dog' is exactly the same as your brother's. Did you copy his? CLYDE: No, teacher, it's the same dog. Teacher: George Washington not only chopped down his father's cherry tree, but also admitted it. Now, Louie, do you know why his father didn't punish him? LOUIS: Because George still had the axe in his hand. Teacher: Harold, what do you call a person who keeps on talking when people are no longer interested? HAROLD: A teacher.

Dear God, I went to this wedding and they kissed right in church.  Is that OK. See more Children's Letters to God

All in the Art

Mrs Clarke looked at the picture drawn by 5 year old Sarah in the art lesson and asked why she had named it Harold Witchart. 'Well,' answered Sarah confidently, 'because that's his name.' 'Oh, interesting,' continued Mrs Clarke, 'and who is Harold Witchart?' 'Oh he lives with God,' nodded Sarah, 'you know........in church we say.........'Our father Witchart in Heaven, Harold be thy name'...............'

All in the Genes

Teacher: Donald, what am I going to do with you...........you do talk an awful lot in class. Donald: Well, I can't help it. It's a family tradition, Mrs Hammersley. Teacher: Eh? What? Just what do you mean by 'family tradition'? Donald: Well, my granddad Archie was a street trader, and my father is a teacher. Teacher: OK. What about your mother, though, Donald? Donald: Oh. She's a woman.

The 'Middle Wife' by an Anonymous 2nd Grade Teacher

...(vidFL2)
I've been teaching now for about fifteen years. I have two kids myself, but the best birth story I know is the one I saw in my own second grade classroom a few years back. When I was a kid, I loved show-and-tell. So I always have a few sessions with my students. It helps them get over shyness and usually, show-and-tell is pretty tame. Kids bring in pet turtles, model airplanes, pictures of fish they catch, stuff like that. And I never, ever place any boundaries or limitations on them. If they want to lug it in to school and talk about it, they're welcome. Well, one day this little girl, Erica, a very bright, very outgoing kid, takes her turn and waddles up to the front of the class with a pillow stuffed under her sweater. She holds up a snapshot of an infant. 'This is Luke, my baby brother, and I'm going to tell you about his birthday.' 'First, Mom and Dad made him as a symbol of their love, and then Dad put a seed in my Mom's stomach, and Luke grew in there. He ate for nine months through an umbrella cord.' She's standing there with her hands on the pillow, and I'm trying not to laugh and wishing I had my camcorder with me. The kids are watching her in amazement. 'Then, about two Saturdays ago, my Mom starts saying and going, 'Oh, Oh, Oh, Oh!' Erica puts a hand behind her back and groans. 'She walked around the house for, like an hour, 'Oh, oh, oh!' (Now this kid is doing a hysterical duck walk and groaning.) 'My Dad called the middle wife.  She delivers babies, but she doesn't have a sign on the car like the Domino's man. They got my Mom to lie down in bed like this.' (Then Erica lies down with her back against the wall.) 'And then, pop! My Mom had this bag of water she kept in there in case he got thirsty, and it just blew up and spilled all over the bed, like psshhheew!' (This kid has her legs spread with her little hands miming water flowing away. It was too much!) 'Then the middle wife starts saying 'push, push,' and 'breathe, breathe.  They started counting, but never even got past ten.  Then, all of a sudden, out comes my brother.  He was covered in yucky stuff that they all said it was from Mom's play-center, so there must be a lot of toys inside there.' Then Erica stood up, took a big theatrical bow and returned to her seat.  I'm sure I applauded the loudest.  Ever since then, when it's show-and-tell day, I bring my camcorder, just in case another 'Middle Wife' comes along. Footnote: Please send us your Out of the Mouth of Babes stories and quotes.