Skip to content
These are the themes for Thanksgiving Day traditions, the turkey supper, parading in the town and giving thanks. 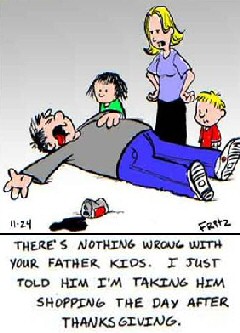 Sarah Hale, a magazine editor, campaigned tirelessly for a national Thanksgiving day.  Hale wrote in Godey's Lady's Book, eventually Sarah's idea caught the president's eye and in 1863, President Lincoln proclaimed the idea of November Thanksgiving, to be precise, that last Thursday in November would be a national day of Thanksgiving.  In 2008, Thanksgiving day fell on November 27th, in 2009 it was November 26th and in 2010 it will be the November 25th, strange how the day goes back a day each year. In Canada they set Thanksgiving Day on the second Monday in October.  Here it was Martin Frobisher who in Newfoundland first gave thanks for surviving his explorations in 1578.  Other countries who celebrate Thanksgiving include Argentina and Brazil. Japan has a national holiday on 23rd November to celebrate Labour / Thanksgiving day.

Hats off to Tareq and Michaele Salahi's their White House blag accords them instant elevation to the pantheon of great gatecrashers. They clearly possess that key requirement for any successful gatecrasher: chutzpah. The Salahis, who were described by the Washington Post as "polo-playing socialites," are also reportedly auditioning for roles in the TV programme The Real Housewives of Washington".

Dress for the occasion, look the part. The Salahis were spot on here. The maxim is 'fit in and you might just get in'.  Always try the front door before the tradesman's entrance.  Time your approach to conincide with a cluster of of real guests.  If possible engage them in conversation.  Look the security men in the eye and nod.  If they stop there try bluster.  We were a last-minute invite.  Once inside walk purposefully and blend in.  Keep talking to the other 'real' guests. Stanley Berman was a New York cabbie and serial gatecrasher who secured the Queen's autograph at a Waldorf reception in 1957, attended Lucille Ball's wedding by pretending to be her bodyguard and topped both of these achievements by scamming a seat in the Kennedy family box for JFK's inaugural ball. Despite his Brooklyn accent, he often called himself Charles du Pont III.

Governor William Bradford famously sent 'four men fowling'. They returned with deer, wild ducks and geese. While they probably did not have turkey as we know it, the Pilgrims coined the word 'turkey' as a generic term for any wild fowl. The resulting feast was more like an English harvest festival than a true Thanksgiving observance. See more pictures of the Pilgrim fathers See more November Thanksgiving Traditions

See more dates for 2010.  Also check the day of the week for these festivals: