Will and Guy have scoured the newspaper tabloids and broadsheets to bring you comic headlines, amusing small ads and funny news stories.

Funny Newspaper Stories on Other Pages

We have trawled American Chronicles, British Broadsheets and Australian Tabloids to bring you these funny newspaper articles.

As many as twenty prisoners at the Risdon Prison in Hobart, Tasmania, Australia, captured a prison officer in a protest over conditions in the maximum security jail Will and Guy have learned. The inmates made 24 demands to authorities initially and these were refused. They attempted one further demand which was for fifteen pizzas, cola and some garlic bread instead. Round about midnight, the final sticking point with the inmates was that they were requiring pizzas to be delivered immediately if the hostage was to be released. A prison staff member negotiated the delivery of the 15 pizzas, Graeme Barber, Tasmania's Director of Prisons, told The Advocate newspaper and then the officer was set free.  We learn that he is recovering from his ordeal at home. No  word is available from the well fed inmates.

A woman was reporting her car as stolen, and mentioned that there was a car phone in it.  The policeman taking the report called the phone and told the man who answered that he had read an advert in the newspaper and wanted to buy the car.  They arranged to meet and the thief was duly arrested. You couldn't make it up!

An Hilarious Car Story from a Tabloid

45 year-old Amy Brasher was arrested in San Antonio, Texas, USA, after a mechanic reported to police that 18 packets containing illegal drugs were hidden in the engine compartment of the car which she had brought to the mechanic for an oil change. According to police, Brasher later said that she didn't realize that the mechanic would have to raise the hood [bonnet - UK] to change the oil.

A Silly but Funny Story where a Policeman Escapes Serious Injury 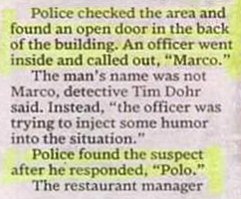 A policeman in Braunschweig, Germany, grabbed a 70 year old thief as he fled from a clothes shop after stealing a shirt we have learned. The shoplifter tried to evade capture by biting the arresting officer before realising he had left his dentures at home; so instead of sinking his teeth into the officer's arm, he was only able to leave a wet mark from his gums. Police spokesman Gunther Brauner reported, 'He tried to bite the officer several times, but had forgotten to put his false teeth in and so was unable to cause him any harm.' 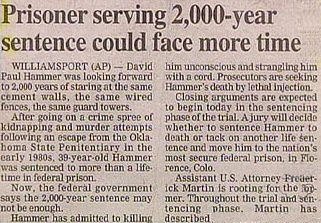 A veterinary surgeon from Holland has been fined 600 guilders [about $240 USD] we have discovered, for causing a fire that destroyed a farm in Lichten Vourde, in the Netherlands. The vet had been trying to convince a farmer that his cow was passing flatulent gas; to demonstrate, the vet ignited the gas, but the cow became a "four-legged flame-thrower" and ran wild, setting fire to bales of hay. Damage to the farm was assessed at $80,000 USD. Will and Guy have received news that no cows were injured in the conflagration.

Mr R.C. Gaitlin, aged 21 years, walked up to two patrol officers who were showing their squad car computer equipment to children in a Detroit, USA, neighbourhood. He inquired how the system worked, the officers asked to use his I.D. for an example. Gaitlin gave them his driver's license; the police officers entered it into the computer, and moments later they arrested him for a robbery committed in St. Louis, Missouri. 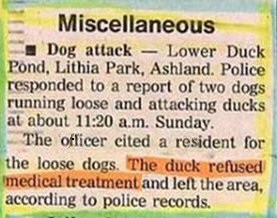 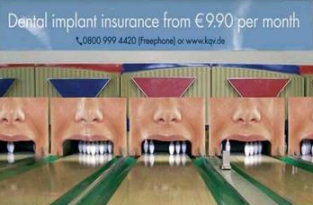 Short Stories from the Newspapers

No benefits for ill man Agency says terminal illness not severe enough. Safety film - Report: A company trying to continue its five-year perfect safety record showed its workers a film aimed at encouraging the use of safety goggles on the job. According to the Health and Safety Council News, the film's depiction of gory industrial accidents was so graphic that twenty-five workers suffered minor injuries in their rush to leave the screening room. Thirteen others fainted, and one man required seven stitches after he cut his head falling off a chair while watching the film. 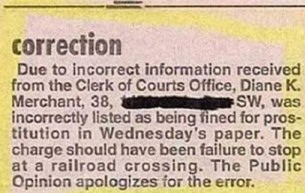 Daily Telegraph: In a piece headed 'Brussels Pays £200,000 Pounds to Save Prostitutes: the money will not be going directly into the prostitutes' pocket, but will be used to encourage them to lead a better life. We will be training them for new positions in hotels.' The Times: A young girl who was blown out to sea on a set of inflatable teeth was rescued by a man on an inflatable lobster.  A coastguard spokesman commented, 'This sort of thing is all too common.'

A blonde stormed up to the front desk of the library and said, 'I have a complaint!' 'Yes, Ma'am?' said the librarian looking up at her. 'I borrowed a book last week and it was horrible.' Puzzled by her complaint the librarian asked, 'What was wrong with it?' 'It had way too many characters and there was no plot whatsoever,' said the blonde. The librarian nodded and said, 'Ahhh. So you must be the person who took our 'phone book.' See more funny library stories Footnote: Please send us your newspaper funnies, amusing stories, headlines and adverts.