Each country has its own way of celebrating the new year.  In many European countries, the New Year celebrations are more important than those for Christmas.

What is Hogmanay?
The Hogmanay festivities get underway about lunch time on the 31st of December.  At about 2 minutes to midnight a lone piper plays, then after the chimes of midnight everyone
sings Auld Lang Syne.  In rural areas you may find first footing dances, called ceilidhs.  It is considered lucky if the first person to cross the threshold is a tall dark stranger.  This
superstition may have resulted from fear of fair Viking raiders who were bent on rape and pillage.

Possibly a more modern tradition is exchanging gifts known as 'Hogmanays'.  Indeed it is
interesting to observe which countries and cultures exchange gifts at Christmas, and which exchange their presents (or 'Hogmanays') at new year.  What shaped Hogmanay from the 17th to the 1950s
was that Scots rejected Christmas because they thought it a Catholic and an English festival.  As a result Protestant Scots worked through Christmas Day and Boxing Day then celebrated Hogmanay with a
vengeance.

Derivation of the Word 'Hogmanay'
The majority opinion is that comes from the Gaelic oge maidne
meaning 'New Morning'.  However, several French words have also been suggested as the source.  Hoguinané, or anguillanneuf, which roughly translated means New Year Gift.

Perhaps
the best way of summing up the Scot's attitude to celebrating Hogmanay is to declare the 2nd of January as a public holiday - to recover from the new celebrations.  It is worth noting that there is big
difference between the raucous celebrations with strangers in Edinburgh and Glasgow; compared with the more ritualized celebration where you know everyone in Scottish Islands such as Lewis.

See in The New Year with Some Clean Scottish Humour

It was a bitterly cold day on the golf course and the caddy was
expecting a large tip from his rich Scottish client. As they neared the
clubhouse, the caddy heard the words he was longing to hear, 'This is for
a hot glass of whisky.' He held out his hand and a sugar cube was placed
in it.

An American entered a bar and stood beside a Scotsman

'Where are you from, pal?' asked the Scotsman, after they'd chatted for
a while. 'I'm from the finest country in the whole wide world,' said the
American.

'Are you?' said the other. 'You have a very funny accent for a
Scotsman.'

Some say the old ones are best.  You can make up your own
mind with these short clean Scottish jokes

These days apple bobbing is associated with Halloween, but in
Celtic societies they also play this game of trying to grab an apple
in one's teeth at New Year.  Bonfires are also associated with
New Year, the town of Biggar in Scotland have a reputation for a
particularly warm fire at Hogmanay.

Another concept is that of the underdog, or every dog has his
day. In essence roles are reversed, officers become other ranks, and
other ranks become top-dogs.

The first footing custom whereby the first man who set foot over
the threshold set the homesteader's luck for the year.  A dark
(non-Viking) carrying a bottle of whisky was particularly portentous
of a good year ahead.  A grey-haired man with with coal, cakes
and a few coins was also welcome.

At the winter solstice, the sun is so low in the Orkney islands that its rays light up the back wall of the cairn.  As the midwinter sun slips below the horizon, its last rays shine directly
through Maeshowe's entrance passage to illuminate the rear wall of the central chamber.

This solar phenomenon only happens once a year on the shortest day - weather permitting.
It's fascinating to think how our ancestors not only calculated what would happen, but had the time and patience to construct the aperture.

The French call New Year's Eve La Saint-Sylvestre.  It is celebrated with a feast called le Réveillon de Saint-Sylvestre.  This
tradition includes dishes such as foie gras washed down with champagne.  The event can be a dinner with friends and family or a communal ball (une soirée dansante).

Following la Saint-Sylvestre is Jour de l'An (New Year's Day); this is a time for meeting friends and family and exchanging good wishes and maybe gifts.  The French round off the holiday season on
Epiphany.

Bleigießen pronounced BLYE-ghee-sen)  'Lead pouring' (das Bleigießen) is an old
custom where sages read molten lead, much like mystics read tea leaves.  What they do is melt a lead cherry sized piece of lead a tablespoon (by holding a flame under the spoon) and then poured the
molten lead into a bowl of water. The resulting pattern is
interpreted to predict the coming year.  Common interpretations include, a ball (der Ball), indicates that luck will roll your way. What people fear is any sign of a cross pattern (das Kreuz) as
that signifies a death.

They Do a
Great New Year Celebration in Hong Hong

I would love to be in one of those boats out on the water. 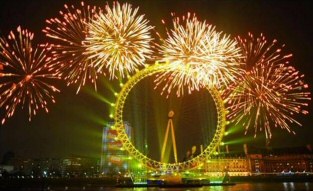 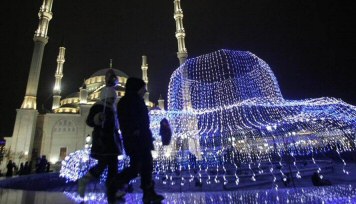 Footnote:
Please write to Will and Guy if you have any examples of New Year
traditions.