Introduction to the Mari Lwyd Tradition

The custom of the Mari Lwyd
(Grey Mare) is unique to Wales.
What happened on or around New Year's Eve was this, a group of friends would dress up in costume with the star attraction being a real horse's head.  What distinguishes the Mari Lwyd celebrations from other types of New Year
merriment is that the revellers challenge house-holders to a singing contest in Welsh.  In a nutshell the Mari Lwyd tradition is wassail singing par excellence, with mummer animal head costumes,
coupled with trick-or-treat menace.

In order to truly appreciate what the Mari Lwyd party of wassailers / mummers could achieve in their hey-day (HAY-day!), you
have to understand the Welsh talent for singing. If you think of a Welsh male voice choir then you get an idea of the power, the harmony and the timbre of the voices. To this imaginary choir, add the
Welsh dry humour (Dai 18 months, a miner with a year and half).  If
you want to appreciate what Welsh singing can achieve, then listen to the
various musical categories at the national eisteddfod.  Another showcase for Welsh singing is the Cerdd Dant or 'penillion' singing.

Now remember that our Welsh ancestors had the same
genes as these present day stars,  but because there was no television or internet, they had to make their own entertainment.  They chose music in general and at New Year they turned their
talents to writing Mari Lwyd verses. 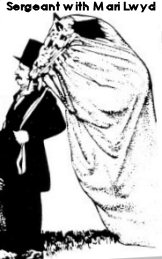 We have to bear in mind that over the Dydd Calan (Welsh New Year) festive season house-holders knew that the Mari Lwyd wassail-singers
would come calling with their 'pwnc' verses, therefore they could plan their response in advance.  The two tactics for the people in the houses were either to capitulate and give the travelling
party what they wanted, which was food and booze, or alternatively, they could lock their doors, bolt their windows and take up the challenge of a choral sparring match.

Incidentally, the travelling party, while of varying ages, were exclusively male.  Typically, the Mari Lwyd
horse was led by a Sergeant, also in attendance was a joker or 'Merryman' plus assorted lesser
lights possibly in animal costume.

Welsh customs have always been handed down in oral rather than written form.  Mari Lwyd or 'Y Fari
Lwyd' actually translates to 'The Grey Mary'. However the Grey Mare meaning is not a modern derivation; the custom of the Grey Mare, with its accompanying horse's head, has been existence for hundreds of
years.  In terms of derivation, the word Mari is more likely to stem from 'mare' than 'Mary'.  Indeed, mare has the additional connotation of night-mare or grey nightmare.  Tracing the history
of the Mari Lwyd name, while of academic interest, is less important than the concept on a singing contest, where the winners got free food and drink, plus the chance to have even more fun with their 'horse'.

Charm of the Mari Lwyd Performance

Part of the charm and much of the mystique with the Mari Lwyd custom, is the sheer variety of this Welsh New Year
legend.  Reports indicate that in some villages it was like an itinerant singing mummer play with a horse head as the star attraction, while in other streets the revelry centred on the verbal jousting with the Mari Lwyd the
figure-head.  Thus in some places the Mari Lwyd was welcomed, yet in other villages it was feared, especially by the girls and women and repelled at all costs.

In truth, the precise date in the calendar when the Mari Lwyd appeared is not that
important, with reports of the Mari Lwyd sighted as early as Christmas Day, or as late as twelfth night (January 5/6).  As far as geography is concerned, the Mari Lwyd was certainly popular in
Glamorgan in S. Wales, yet adaptations probably took place as far a field as Aberystwyth in the west and Anglesey in the north of Wales.

Just as today you get variations in Santa Claus designs, so
you get a rich mixture of Mari Lwyd horses.  One type were made with real horse skulls, their speciality was a lower jaw wired and sprung so that it could give it's victim a nasty nip.  While other grey mares were
made of wood and covered with a white cloth to conceal a person playing the part of the Mari Lwyd.  I have to wonder how long the cloth stayed white, and whether Lwyd (Grey) referred to the
off-white colouring of the covering fabric.  Judging by the tortuous route and the adventures of the average Mari Lwyd, fine details such as
ribbons and glass eyes may not have lasted long in the evening's exertions.
See more examples of
Mari Lwyd on Flickr

Sadly, by the 1920s the custom of the Mari Lwyd was dying out, some blame the decline of the Welsh
language, while others blame alternative entertainment such as the cinema.  My family say that the Chapel preachers spoke out against the evil of the Mari Lwyd and this had an effect of reining-in
the more excessive celebrations.

Since the second
world war parading the Mari Lwyd, has made a come-back; as well as curbing the more rumbustuous behaviour there is now less emphasis on the accompanying singing joust.  In recent years Llantrisant,
Llangynwyd and Aberystwyth stage some of the best modern re-enactments.  At Llangynwyd (Near Bridgend, South Glamorgan) Cynwyd Evans achieved celebrity status in the 1990s for his ability to
remember the old response verses and also to modify them to repel successive years Mari Lwyds.

What I find awe inspiring is that in its original form, the
Mari Lwyd tradition cannot be recreated
today, firstly, because the people in the houses simply could not sing verses in reply to the Mari Lwyd party.  Secondly, I fear that even if Welshmen brushed up their witty verses and attempted a
realistic re-enactment they would be arrested for assault, demanding money with menaces, indecent behaviour and criminal damage.  In bygone years it seems that people just tolerated this
behaviour, or repelled the invaders with the rhetoric of their singing or, more likely, the strength of their barricades.

The Mari Lwyd exchange would usually start in with a stylised joust.
This
example below does not do the full performance justice as the real pwnco had more verses and tailored the rhetoric to the people in each house :

The Mari Lwyd party sing:
"Open
your doors,
Let us come and play,
It's cold here in the snow.
At Christmastide

The House-holders reply
"Go away you old monkeys
Your breath stinks
And stop blathering.
It's Christmastide."

Outsiders:
"Our mare is very pretty (The Mari Lwyd),
Let her come and play,
Her hair is full of ribbons
At Christmastide."

House-holders (Giving in)
Instead of freezing,
We'll lead the Mari,
Inside to amuse us
Tonight is Christmastide."

House-holders (Repelling
invaders thus)
Instead of freezing,
Take the Mari home,
It's past your bedtime
Tonight is Christmastide."

What It Was Like
Being Visited by the Mari Lwyd

In my Grandparents household they spent at least one winter evening writing new witty lines to sing when challenged by the Mari Lwyd party.  Although it was dark and the marauding party would be dressed in costumes, the
people in the house would soon recognise the voices of the men in the Mari Lwyd party.  Battle would commence, verses would be traded.  With luck, and a little preparation, the people in the house would be aware of the physical and emotional weaknesses of the attacking party.  If
the witty rhymes (pwnco), sung in lilting Welsh struck a raw nerve in the attacking party, then the outsiders would either try to break down the door - considered bad form, or more likely, shuffle on
to an easier target.

On the other hand, if the Mari Lwyd party had done their homework, their opening verses may hint at even nastier indiscretions, which they would expose if
captive householders did not welcome them and ply the horse and its entourage with food and drink.  There is a word in Welsh that describes the verbal jousting - pwnco.  My mother says that she
would do all that she could to repel the Mari Lwyd, because what she feared most was the nasty bite that you would get from the horse's teeth - even if it was only a skull.

This Mari was kindly sent by Daniel Lewis of Utah, America.

Variations of the
Mari Lwyd - The Wren's House

As I mentioned earlier there must have been numerous variations on both the pwnco verses and the Horses' heads.  One famous example is where a Wren's house
bedecked with ribbons replaced the Mari Lwyd.  Men would capture a poor unfortunate Wren and parade it in the makeshift aviary.  Talking of makeshift, even the Wren's house may not be what it
claimed as boys would substitute sparrows if they could not find a tiny wren.

Once again the objective of the singers was getting a warm
welcome and food and drink from the householders.

Footnote:
If like Daniel you have a picture or
anecdote showing the Mari Llwyd tradition, please send it to Will and Guy