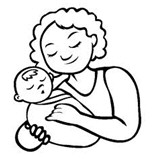 How
Mother's Day
Began in The UK

Mother's Day in the UK can be understood by reference to its less
common, but more descriptive name - Mothering Sunday.  Let us look back at a
time when many young men and women worked away from home as servants of the wealthy.
Masters would give the their servants an occasional day off to attend their
own church, and this would have
been an opportunity to visit their families after the service.  Eventually, visiting
mother became the
prime purpose of this annual day off and thus 'Mothering Sunday' was born.

Mothering Sunday in the Middle Ages

Mothering Sunday has been celebrated in Britain on the fourth Sunday in Lent
since the 16th century.  One suggestion of its origins is that the
custom originated in the church festival of 'Refreshment Sunday' when everyone
was expected to revisit the church in which they were baptised, their 'Mother
Church.'

Alternatively Mothering Sunday may have started when English Catholics were supposed
to travel to attend Mass in their 'Mother Church', this would have been the regional cathedral
rather than in their local parish.  Whatever the merits of this theory, by the Reformation, it had changed
into an occasion for children to visit their parents.

The earliest occasions that can be accurately traced by historians, for
honouring the mother figure, are pre-Christian in origins, relating to the
mother-goddess of pagan religion and entwined with the springtime cycle of
renaissance [new life and rebirth].

The ancient Greeks chose a day in spring to honour the mother of the gods, Rhea:
early Christians held a springtime festival in honour of Mary the mother of
Jesus. As the Christian faith spread through Europe, this practice was carried
with it and this celebration of the Mother of Christ was gradually extended to
the Mother Church and, eventually, to honour all mothers.

Mother's Day in Other Countries

In the USA Mother's Day (as opposed to Mothering Sunday) is celebrated on the second Sunday in May, a date fixed
in 1914; interestingly this date is shared by Australia, Belgium, Denmark,
Finland, Italy and Turkey. 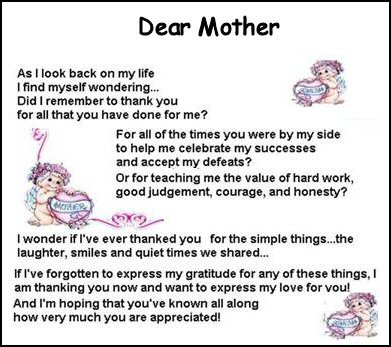 When is Mothers
Day - Dates In Other Years

The Origin of
Mother's Day In America

There are two claims for the origin of Mother's Day in America.  The
person responsible for the modern form of this celebration was Anna Marie Jarvis,
whose mother died on May 9, 1905.

On May 8, 1914, Congress passed a law which designated the second Sunday
in May as Mother's Day, and the next day President Woodrow Wilson announced the first national Mother's Day.
In this era it was a day for American citizens to honor those mothers whose
sons had died in war. 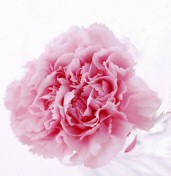 It was Anne Marie Jarvis who created the association between the
carnation and Mother's Day.  The present tradition is to wear a red
carnation if you mother is living and a white one if she is deceased.

An earlier claim to have established Mother's day in 1868 involved
another Ann - Ann Jarvis, and this too had the theme of uniting mothers who
had lost a son in the Civil War.  However, this was called not Mother's
Day but Mother's Friendship Day and its purpose was to reunite families that
had been separated, or divided by the American Civil War.

The Vocabulary
of a Mother

The apostrophe, to represent the possessive always causes spelling
difficulties.  Will and Guy's logic is that we
remember one's mother, thus we write Mother's Day.  In British English, as opposed to
American English, it's also possible for a group of unrelated people to celebrate their Mothers' Day.
While this usage of the apostrophe is grammatically correct in England, it's
not in common usage.

Translation:  Guy know's it should be Mother's Day,
but occasionally he slips up and calls it Mothers' Day. 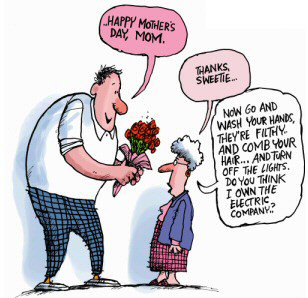 While assembling furniture, Liz asked her friend's six-year-old
son, Ricky, to bring her a screwdriver.
'Do you want a 'Daddy'
screwdriver or a 'Mummy' screwdriver?'  Ricky politely inquired.

All women become like their mothers.  That is their tragedy.
No man
does.  That's his. - Oscar Wilde

The Stages Of
Motherhood: Author Unknown
[Will and Guy do not agree with all these
sentiments] 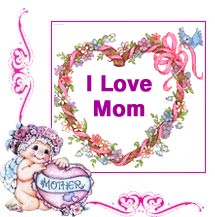 Sara, a little girl, is sitting and watching her mother wash the dishes at
the kitchen sink.  At once she notices that her mother has several wisps of white
hair sticking out in contrast to the rest of her brunette hair.  Sara looks at her mother and inquisitively asks,
'Why are some of your hairs white, Mum?'

Her mother answers, 'Well Sara, every time that you do something wrong and
make me cry or unhappy, one of my hairs turns white.'

Sara thinks about this revelation for a while and then inquires, Mummy, why
is it then that all of grandma's hairs are white?'

A Mother of a Small Boy Says

When is Mothers
Day?