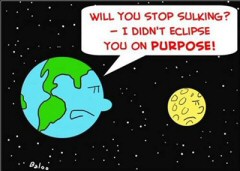 Here is Will and Guy's collection of lunatic stories, funny pictures
and moon myths.

Look to The Moon

Murphy and Declan were walking home from the pub.  Murphy says to
Declan, 'What a beautiful evening, look at the moon.'

Declan stops and looks at Murphy, 'You are wrong, that's
not the moon, that's
the sun.'
Both started arguing for a while when they come upon a real drunk walking in the other direction, so they stopped him.

'Sir,
could you please help settle our argument?

Tell us what that thing is up in the sky that's
shining. Is it the moon or the sun?'  The drunk looked at the sky and then looked at them, and said,

'Sorry, I don't
live around here.'

Footnote:
Funny how one joke reminds you of another.

The Cow Jumped Over the Moon

Hey diddle diddle,
The cat played the fiddle,
The cow jumped over
the moon,
The little dog laughed to see such sport,
And the dish ran
away with the Spoon

Mick and Seamus staggered out of a bar in Limerick (it really happened).
They sat on a bench to get their bearings.

Seamus, in philosophical mood, said to Mick, 'which do you think is
farther away Dublin or the moon?'

Mike thinks for a full minute and says, 'It must be Dublin.  I can
see the moon up there, but I've looked around and I cannot see Dublin
anywhere'. 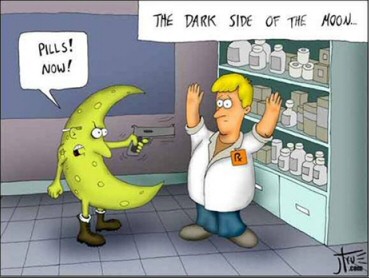 'The Dark Side of the Moon' is the eighth studio album by English rock
group Pink Floyd, released in March 1973.

The dark side of the Moon may mean either:

There was an Old Man of the Hague,
Whose ideas were excessively vague;
He built a balloon to examine the moon,
That deluded Old Man of the
Hague.

Myths and legends often grew up, in ancient times, to explain difficult
and uncertain happenings in the world. These examples researched by Will and
Guy follow this pattern. We hope you enjoy them because we think they are
fun.

The Chinese Moon Legend of Chang Er
This story is set
around 2170 B.C.  The earth once had ten suns circling over it and each
took its turn to illuminate to the earth. One day, however, all ten suns
appeared together, scorching the earth with their fierce heat.

The earth was saved by a strong and tyrannical archer named Hou Yi. He
succeeded in shooting down nine of the suns.  One day, Hou Yi stole the
elixir of life from a goddess. However his beautiful wife Chang Er drank the
elixir of life in order to save the people from her husband's tyrannical
rule. After drinking it, she found herself floating and flew to the moon.

Hou Yi loved his divinely beautiful wife so much, he didn't shoot down
the moon.

Romanics feel that lovers should spend time together at this
festival. They could spend a romantic night together tasting the
delicious moon cake with some wine while watching the full moon. 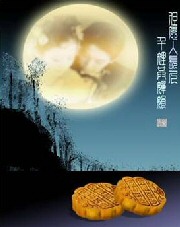 Will and Guy suggest that even if a couple can't be together, they
can still enjoy the night by watching the moon at the same time so it
seems that they are together at that hour.

More about the
Chinese Moon Festival

Question: What do you get when you take a green cheese
on the moon and divide its circumference by its diameter?

Legends About The Moon From Around the World

Hunter's Moon and Poacher's Moon
The first full moon
after the autumnal equinox is know as 'Hunter's moon' because the light
combined with abundance of prey such as rabbits meant it was the pefect time
for stalking prey.  Other call this the Harvest moon.

Incidentally, the first full moon after the vernal (spring) equinox is sometimes
called 'Bluebell moon'.  Earthshine is especially noticeable at this
time of year.  My grandmother described this grey reflection of the
earth on the moon as the Old Moon in the New Moon's arms.

The sun loves to catch and eat his children, so they flee from the sky
whenever he appears.

The moon plays happily with the stars while the sun is sleeping.

However, each month, she turns her face to one side and darkens it [as
the moon wanes] to mourn the children that the sun succeeded in catching.

A Legend from Nigeria, West Africa
The Efik Ibibio
people of Nigeria in West Africa also say that the sun and the moon are
husband and wife.

Long ago they lived on the earth. One day their best friend: Flood, came
to visit them, bringing fish, reptiles, and other relatives. Flood rose so
high in their house that they had to perch on the roof.

Finally he covered the house entirely, so the sun and moon had to leap
into the sky.

A Myth from Greece
According to the Greek myth of
Endymion and Selene, the moon (Selene) fell in love with a handsome young
king named Endymion and bore him 50 daughters.

One version of the story says that Selene placed Endymion in eternal
sleep to prevent him from dying and to keep him forever beautiful.

A Legend from Kenya, East Africa
In a myth of the
Luyia people of Kenya in East Africa, the sun and moon were brothers. The
moon was older, bigger, and brighter, and so the jealous sun picked a fight
with him. The two wrestled and the moon fell into mud, which dimmed his
brightness.  God finally made them stop fighting and kept them apart by
ordering the sun to shine by day and the mud-spattered moon to shine by
night to illuminate the world of witches and thieves.

Did you hear about the great new restaurant on the moon?

The food is excellent, but there's no atmosphere.

"The man in the moon came down too soon,
and asked his way to Norwich,
He went by the south and burnt his mouth
By supping on cold plum
porridge."

"The man in the moon came down too soon,
and asked his way to Norwich,
They sent him south and he burnt his mouth
By eating cold
pease-porridge."

An old ballad runs (original spelling):
"Our man in the moon drinks
clarret,
With powder-beef, turnep, and carret.
If he doth so, why
should not you
Drink until the sky looks blew?" 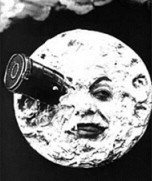 The silent film's plot, a light-hearted satire criticizing the
conservative scientific community of its time, was inspired by Jules Verne's
"From the Earth to the Moon" (1865) and H. G. Wells' "First Men in the Moon"
(1901).

Footnote:
Please send us your moon jokes and funny
pictures.