Kindly sent in by Glenn

Will and Guy are most grateful to readers such as Glenn who send in
jokes, funny pictures and true stories.  One of our greatest pleasures is adding to our list of credits.

When I was a child my family was quite poor and my Father and Mother worked very hard for little reward.  We often moved as my father sought better employment and at the time of this story I was 10 years old.
The family consisted of my father, mother, 2 year old twin brother & sister and myself. My father had just got a new job but at the time we had no house, instead the five of us lived in a caravan on a site that
was run by a farmer who made Scrooge look generous.

This man made everyone's
life a misery as what services he did offer were few and far between and cost the earth. However, at the time it was the best
situation my father could find for us. The caravan park was many miles from the town centre in Newbury and as we did not have a car or any other transport, the farmer always had the upper hand.

Living in the caravan at that
time had many drawbacks, one of which was that the caravan park had no amenities other than the farmers shop (inflated prices). I cannot describe the misery of the place accurately, you had to live there to
appreciate it. One of the main problems as you might guess were toilet facilities, or total lack of them. In our caravan they consisted of a 5 gallon chemical toilet in a cupboard, laughingly called a
'bathroom', you couldn't
swing a cockroach in let alone a cat! 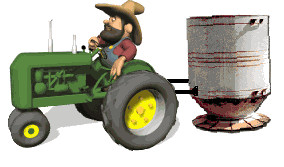 Every day or so the farmer would arrive on a tractor towing a trailer fitted with a small container similar to a petrol tanker that the
'inmates' dutifully queued up at to empty their toilets into. My mother called it the
'walk of shame'. However, as children we thought it funny and the minute we saw the farmer arriving would run around
chanting 'Sam, Sam the lavatory man'! In hindsight it was degrading to see decent people being so embarrassed over such an unpleasant task.

Unfortunately Sam was not a pleasant character and would often
take umbrage over nothing and close the shop, or worse still withdraw the toilet collection service for
days on end.

I remember this happening many times. On one occasion he withdrew the toilet
'service' for
over two weeks without any signs of restoration. A group of desperate men threatened to commandeer the tractor & trailer to ease the situation, this only made things worse with him. Even the pleadings of the
women in the caravan park fell on deaf ears!

In our caravan things were soon reaching the point of no return and I remember my father returning from yet another appeal to the farmer without success. My
mother being a very house-proud woman was beside herself over the situation. Several people on the site had taken drastic action and emptied their toilets into a ditch which ran along the back of the site near
to our caravan. My mother thought this was terrible and would have no part in this until sadly we were left with no other option.

That evening my mother made my father wait until it was dark before she
allowed him to remove the chemical toilet, the shame for her was too much to bear. As you can imagine this was an extremely delicate task as the toilet was really at critical mass level. My father gently walked
across the grass to the ditch as if he was carrying a flask of nitro-glycerine, I remember this took an eternity. My mother was red faced with shame and luckily for her was hiding inside the caravan and
therefore spared what happened next.

Eventually my father reached the top of the ditch without spilling any of the contents of the toilet but unfortunately as people had been there before him the ground
was slippery. As my father was about to empty the toilet he lost his balance and I can only describe it as a windmilling action that I saw as he endeavoured to stay upright. Sadly, he never made it and flew
through the air landing face down in the bottom of the ditch amongst the debris that previous desperate people had left. A split second later our toilet landed upon his back covering him from head to foot.

I ran over to the ditch and looked down at my poor father who looked like something from an old Quatermass movie. I cannot describe the look of disbelief and horror on his face but to this day I can see it
as clearly as yesterday. Suddenly, with an almighty roar, a tractor and trailer materialise from nowhere and at that exact moment the headlights flicked on catching my father standing knee deep in the ditch
arms outstretched like Jesus on the cross. However, Jesus never held an empty 5 gallon chemical toilet in his left hand or had bits of toilet paper etc. all over him.

I remember the farmer yelling
at my father 'Blo*o*dy typical, you moan and groan and then you have the nerve to blo*o*dy well use my ditch. That's
the last time I do you a favour!'. With that he put the tractor in gear and drove back to the
farm leaving my father standing speechless in the ditch. In seconds my father was surrounded by people all wanting to have a laugh at his expense, well when I say surrounded they actually stayed upwind of him.
My mother was conspicuous by her absence only appearing briefly to tell my father he couldn't
come back in 'like that'.

After a few gallons of water out in the cold night air he cleaned up quite nicely
but the smell took about 2 days to dissipate. In fact, I think it disappeared at about the same time as my behind stopped smarting. My father didn't
take kindly that night to my hysterical tears and laughter at
his disposition! I can't
blame him, but even 40 years later I still smile and giggle whenever I think about that night. Happily after all these years my father and mother can see the funny side of it now and
laugh about it, but never, ever, ever, as much as I did that night.

Luckily, shortly after this episode my father found us a house in Newbury and we moved. After that the families prospects increased over
the years so this was the turning point for us. Perhaps the saying is true that there really is
'Money in Muck'.

I assure you this story is absolutely 100% true.