Each day of the week has a definite personality, for example the saying, Monday's child is fair of face.  Will and Guy have a variety of jokes and funny quotes to overcome the Monday morning blues.

Monday is an awful way to spend 1/7th of your life! Each Friday afternoon we go home full of the joys of the weekend.  In contrast after the weekend we drag ourselves into work full of the Monday morning blues.  This video clip captures that Friday to Monday transition.

'Puente' is the Spanish for bridge.  However, it's not the literal meaning that interests us.  Unlike the rest of the world, the Spanish hold their bank holidays on a Tuesday, consequently, on most occasions Monday will be treated as a bridge day [an extra day of holiday], thus ensuring a four day weekend.

A Variety of Funny Monday Quotes

Monday Jokes - Having a Bad Day with Your Computer?

Perhaps one of these sites can help you: 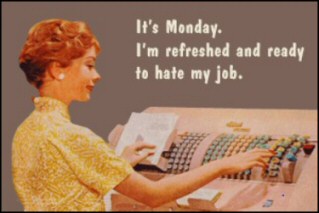 It's Monday, You've Just Been Jilted - Food for Thought

The hospital's consulting dietician was giving a lecture to several community nurses from the Southampton area of Hampshire. 'The rubbish we put into our stomachs and consume should have killed most of us sitting here, years ago. Red meat is terrible. Fizzy drinks attack your stomach lining. Chinese food is loaded with msg. Vegetables can be disastrous because of fertilisers and pesticides and none of us realises the long-term damage being done by the rotten bacteria in our drinking water.

However, there is one food that is incredibly dangerous and we all have, or will, eat it at some time in our lives. Now, is anyone here able to tell me what food it is that causes the most grief and suffering for years after eating it?' A 65-year-old nursing sister sitting in the front row stood up and said, 'Wedding cake.'

Nigel: The two things I cook best are meatloaf and apple pie. Sally: Which is this? 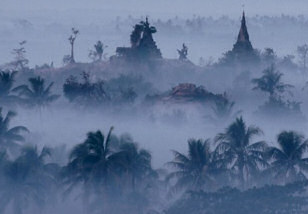 Cheer yourself up with more pictures of a beautiful Monday

Special Mondays Throughout the Year

If you work in a company where one person gets Monday off, another Tuesday and so on throught the week, never volounteer for Monday because there are so many natural holidays on a Monday that you are better off choosing say a Tuesday or a Thursday. Presidents' Day The third monday in February honors American presidents, in fact it was once called Washington Day. Labor Day An American holiday on the first Monday in September. Bank Holiday Monday Here is an English tradition of wet weekends spread throughout the year. Columbus Day The second monday in October commemerates Christopher Columbus discovering America in 1492. Cyber Monday While Thanksgiving is an official holiday, the week following is not. Since 2005 the following Monday has been labelled 'Cyber Monday' and has become one of the busiest shopping days of the year. Clean Monday or Ash Monday Clean Monday is the first day of the Eastern Orthodox Christian and Eastern Catholic Great Lent. It is a movable feast that occurs at the beginning of the 7th week before Orthodox Easter Sunday. It is called "Clean Monday", because it refers to people leaving behind their sinful attitudes.

During the Renaissance America began. Christopher Columbus was a great navigator who discovered America while cursing about the Atlantic. His ships were called the Nina, the Pinta and the Santa Fe. Later the Pilgrims crossed the Ocean, and that was called the Pilgrim's Progress. When they landed at Plymouth Rock, they were greeted by Indians, who came down the hill rolling their was hoops before them. The Indian squabs carried their cabooses, which proved very fatal to them. The winter of 1620 was a hard one for the setters. Many people died and many babies were born. Captain John Smith was responsible for all this.

Analysis of workplace sickness reveals that Mondays in January are the most popular days for workers pulling a 'sickie'.  Twelve of the twenty most popular days for sickness absence occurred in January. Another study of sickness found that 34% of all sick leave is taken on a Monday.  What happens is that attendance on the remaining working days becoming higher as the week progresses. Thus the lowest sick leave rate was recorded on Fridays with just 2.9% of the total.
Quick Monday Morning Diagnosis Nurse: 'Doctor, Doctor the man you've just treated collapsed on the front step.  What should I do?' Doctor: 'Turn him around so it looks like he was just arriving!'

Blue Monday the most depressing day of the year.  It falls on at the end of the January, typically on the Monday of the last full week of January. Cliff Arnall's formula is:

PLEASE DO NOT SMOKE NEAR OUR PETROL PUMPS. YOUR LIFE MAY NOT BE WORTH MUCH, BUT OUR PETROL IS Spotted in a Safari Park: ELEPHANTS PLEASE STAY IN YOUR CAR Funny Warning Labels on Appliances On a cardboard windshield sun-shade: 'Warning: Do Not Drive With Sun Shield in Place' . Why Pumpkins are Better than Men? Each year you get a brand new crop to choose from.  Also, they are always on the doorstep there waiting to greet you.

Having just moved into his new office in Whitehall, pompous, newly promoted Lieutenant Commander Rodney Grant [Royal Navy] was sitting at his desk when Leading Seaman Jones knocked on his door. Particularly aware of his new position, the commander quickly picked up the phone, told the seaman to enter, then said into the phone, 'Yes, Admiral, I'll be seeing him this afternoon and I'll pass along your message. In the meantime, thank you for your good wishes, sir.' Feeling as though he had sufficiently impressed young Jones man, he asked, 'What do you want?' 'Nothing important, sir,' Jones replied without batting an eyelid, 'I'm just here to connect up your new telephone.'

Bad Label on a Passenger Manifest

A New York lawmaker called and asked, 'Do airlines put your physical description on your bag so they know who's luggage belongs to who?' I said, 'No, why do you ask?' She replied, 'Well, when I checked in with the airline, they put a tag on my luggage that said (FAT), and I'm overweight, I think that is very rude?' After putting her on hold for a minute while I ' looked into it' (I was actually laughing) I came back and explained the city code for Fresno, CA is (FAT), and that the airline was just putting a destination tag on her luggage. I thought under my breath, a good job she wasn't going to Show Low airport in Arizona (SOW). Footnote: Please send us your funny Monday morning jokes.