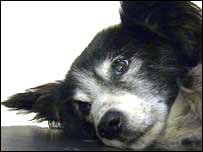 The driver thought he had struck something on the dual carriageway
outside Coleraine after hearing a thud, but when
he saw nothing on the road, he continued unaware of his '
passenger'
. It was only when he got out at the Odyssey Arena in Belfast that he heard a barking sound coming from the front bonnet.

After such an ordeal, the dog was understandably grumpy, and this attitude has earned him the nickname Father Jack, in honour of the cantankerous priest in the sitcom Father Ted.

As reported
by Peter Allen on Radio 5 Live '
Drive'
programme.

The Sun newspaper reports the story of a cat named Aslan who fell asleep under a car bonnet in the East Anglian town of Ipswich in the UK. The car's
owner and driver, a Mr Rob Hillier, then drove the car
some 260 miles to visit his relatives in Maesteg, Mid Glamorgan, Wales. The next day Aslan's
cries [surely '
miaows'
says Will] were heard and he was found unhurt and returned home. I imagine he travelled
more comfortably this time.

3) Out of the Mouths of Babes:

Greg, the three year old, put his shoes on by himself. His father, Barry, noticed that the left shoe was on the right foot and vice-versa. He sat Greg down on a chair and said quietly, 'Greg, your shoes are on the
wrong feet.'

He looked up at his father with a quizzical expression and replied, 'Don't
mess me about, Dad, I know they're my feet.'

A Russian couple had a narrow escape when their naked neighbour dropped in - through the ceiling.

Rozalia Valiakhmetova had been relaxing in the bath when
the floor gave way, dropping her and the bath tub into the flat below.

She said: 'I had just dozed off and then I heard this huge crash and realised what had happened. The bathroom floor just collapsed
under the bath and I came crashing through the ceiling of the people below me.

'They seemed as shocked as I was when they saw me lying there naked in the bath in the middle of their living room.'

She
was treated at a local hospital for injuries to her leg but otherwise was unhurt.

Local council engineers said the floors in the old apartment block in Solnechnaya in the Surgut district of Russia where
Valiakhmetova lived were supported by wood which had rotted over the years.