Last Monday in May

Memorial Day, originally called Decoration Day, is a day of remembrance for
those who have died in the service of the USA.

Observance of Memorial
Day in the USA

Buddy Poppies are still made today and given away around Memorial Day.
The donations received for Buddy Poppies go directly to support disabled
veterans and the families of fallen veterans.

Memorial Day is a day when the US pays respect to all fallen troops from
all military conflicts. They place flags on the graves of veterans, and the
President lays a commemorative wreath at the Tomb of the Unknowns.

Parades on Memorial Day are generally low key processions of military
groups, veterans groups, scouts and service organizations. They march to
each cemetery and military shrine in a community, fire off salutes in honour
of the dead, and place flags at grave sites. This is the true meaning of
Memorial Day.

In Flanders fields the poppies blow
Between the crosses, row on row,
That mark our place; and in the sky
The larks, still bravely singing,
fly.
Scarce heard amid the guns below. We are the dead. Short days ago
We lived, felt dawn, saw sunset glow,
Loved, and were loved, and now we
lie
In Flanders fields. Take up our quarrel with the foe:
To you from
failing hands we throw
The torch; be yours to hold it high.
If ye
break faith with us who die
We shall not sleep, though poppies grow
In
Flanders fields.
by John McCrae. 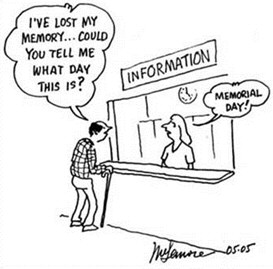 It may seem callous, insensitive, unpatriotic to even mention humour on
the same page as Memorial Day.  Yet Will and Guy feel that one can
inject humour into virtually any topic, providing it's done tastefully.

Official Memorial Days - Variations Following the Last Monday in May 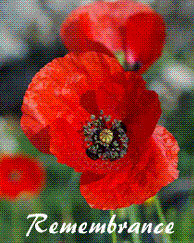 Remembrance Day [Australia, Canada, United
Kingdom], also known as Poppy Day [Malta and South Africa], Veterans Day [USA, and Armistice Day [France, New Zealand, and many other British Commonwealth countries]; is a day to commemorate the sacrifice of
veterans and civilians in World War 1, World War 2, and all other wars.

It is observed on 11th November to recall the end of World War I on that date in 1918. [At 11am a two minute silence is observed at war
memorials, cenotaphs, religious services and shopping centres throughout Britain; the Great War ended at the11th hour of the 11th day of the 11th month].  The observance is specifically dedicated to
members of the armed forces who were killed during war.

The Last Post is played at military funerals and at the end of a
Remembrance Day service. This haunting melody to recognise the fallen is also, played
in the USA and Canada where it is refered to as "Taps".

It was probably Brigadier General Daniel Butterfield, who was instrumental
in commissioning "Taps" circa 1862.  Reports that
Union Army Captain Robert Ellicombe was responsible seem to be an urban
myth.

When "Taps" is played at a funeral, it is customary to salute if you are
in uniform, or else place your hand over your heart if in mufti. However, these words, which may accompany "Taps", were originally called
Butterfield's Lullaby and were probably sung at the soldiers' lights out.

Day is done.
Gone the sun.
From the lakes
From the hills.
From the sky.
All is well.
Safely rest.
God is nigh.

Fading light.
Dims the sight.
And a star.
Gems the sky.
Gleaming bright.
From afar.
Drawing nigh.
Falls the night.

Memorial Day - Last Monday in May