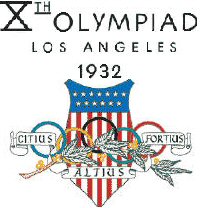 In the 1932 Los Angeles Olympics, Mildred (Babe) Didrikson won gold medals and broke her own world records in both the javelin and the 80-meter hurdles. In the high-jump she was awarded the silver in the high jump despite clearing a world-record height.  The judge's strange reasoning was because they disliked her technique of clearing the bar headfirst. For sheer athletic ability, Babe Didrikson may have been more versatile than Jim Thorpe. She led the Dallas Cyclones to three AAU national basketball championships and scored 106 points in one game. After the Olympic Games Babe Didrikson pitched for the House of David men's baseball team and once struck out Joe DiMaggio. Pro basketball, billiards, handball, swimming, diving, lacrosse, football, boxing, she did them all and, as she was quick to point out, she did them better than the next person. She was good at everything, typing (86 words a minute), gin rummy, cooking, dancing, harmonica playing and crossword puzzles. 'The best way to take athletics, 'she said,' is to like them all. Athletics are all I care for.  I sleep them, eat them, talk them and try my level best to do them as they should be done.'  The first time she tried golf, without a lesson, she shot 95 for 18 holes. After three lessons, she was down to 83 and driving the ball 250 yards.  In 1934, in her first tournament, she shot 77.  She took the game so seriously that she spent 12 to 16 hours a day on weekends hitting golf balls until the blisters on her hands broke. She won 17 consecutive amateur tournaments, and when she turned professional she helped point the women's tour to its present importance. In 15 years, she won 55 amateur and pro tournaments. Other notable performances:  Buster Crabbe, the great American swimmer who was to go on to make a name in Hollywood as Tarzan, Buck Rogers and Flash Gordon. The Olympic Games would also be held in Los Angeles in 1984.
Olympic Games Trivia Poland's Stella Walsh, [Stanislawa Walasiewicz] won the women's 100m race at the 1932 Olympics in Los Angeles, becoming the first woman to break the 12 second barrier.  When she was killed in 1980, as an innocent victim in a robbery attempt, an autopsy declared her to be a male. See more Olympics Trivia

Footnote Please send us your interesting facts and trivia for the Los Angeles 1932 Olympic games.