Many cultures have fairies as part of their folklore, but few have little people with such a rich source of humour, funny stories and different guises as leprechauns.  To begin with leprechauns are exclusively male which immediately gives them great scope for mischief. 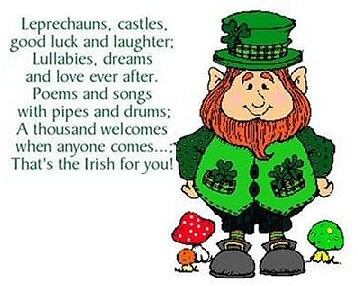 Many cultures have fairies as part of their folklore, but few have little people with such a rich source of humour, funny stories and different guises as leprechauns. People even dress up in entirely green outfits and portray leprechauns around the holidays.

A leprechaun bought himself a jigsaw puzzle with 20 pieces.  It took him a month to fit the pieces together correctly.  He thought this was terrific, but his mate O'Reilly said, 'What's the big deal?' The Leprechaun said, 'Well it said on the box: 4 to 6 years.' 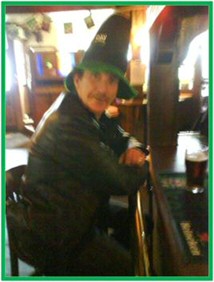 Will and Guy have only ever seen green leprechauns, but we here rumours that in some parts there have been sightings of black leprechauns.  Any information about the various tribes of leprechaun gratefully received. 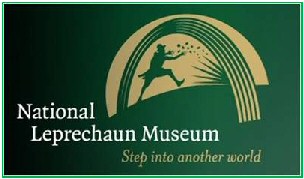 Based in the heart of Dublin city, in Eire, the National Leprechaun Museum is a national cultural entertainment centre that takes visitors deeper into Irish and Celtic culture to discover what really lies behind the well-known tales of Irish cultural iconography - leprechauns, rainbows and pots of gold. The National Leprechaun Museum is the first ever visitor attraction dedicated to Irish mythology and promises to open up a fun and magical world full of fascinating folklore and enchanting stories. Visitors to the museum are encouraged to feel what it's like to journey deep beneath the rocks of the Giant's Causeway, open up their minds to the sights and stories of Ireland's mythical otherworld on a trip to fairy hill, experience what it's like to live in a leprechaun-sized world and journey to the end of the rainbow to see if the elusive crock of gold really exists. The museum initially employs eight people. The museum's director and creator, Tom O'Rahilly informed Will and Guy that, 'The National Leprechaun Museum is a first; nothing like it exists anywhere else in the world. Irish culture is famous the world over - even Walt Disney came to Ireland to look for leprechauns.'

Walking into the bar, Shamus said to O'Heir the bartender, 'Pour me a stiff one - just had another fight with the little woman.' 'O, bejabbers,' said O'Heir, 'And how did this one end?' 'Hah, when it was over,' Shamus replied, 'she came to me on her hands and knees.' 'Really?' cried O'Heir, 'now that's a switch!  What did she say?' She said, 'Come out from under the bed, Shamus, you little chicken.'

A Leprechaun is never drunk as long as he can hold onto one blade of grass to keep from falling off the earth. May the roof above you never fall in and those leprechauns gathered beneath it never fall out. 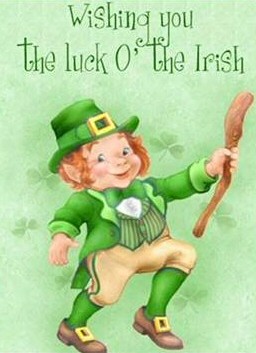 Two Leprechauns have just won �500,000 in the Irish lottery and they are now having a pint in O'Malley's bar. Timothy turns to say to Seamus and says, 'What about all them begging letters?' Seamus replies, 'Oh, we'll just carry on sending them.'

Luck of the Irish

Kieran O'Connor always slept with his gun under his pillow. Hearing a noise at the foot of the bed, he shot off his big toe. 'Thank the Lord I wasn't sleeping at the other end of the bed,' Kieran said to his friends in Donegal's pub. 'I would have blown my head off.' 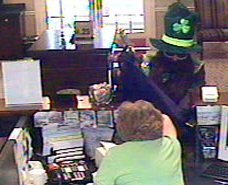 Police confirmed that the same man man had held up a bank in Nashville three days before Christmas - dressed as Santa Claus.  Footnote: Please write to Will and Guy if you have any funny leprechaun pictures or jokes.