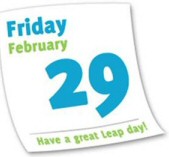 To modern mankind, leap days and leap years make sense.  Unlike our
ancient ancestors, we realise that there are 365 and a quarter days in a year.
Thus we get used to the idea that ever four years there will be an extra day
called the 29th of February.

A year is the time it takes the earth to orbit the sun.  Moreover, a
year brings with it the concepts of repeating seasons and fluctuating day
length.  Indeed, it was not that long ago when wise men thought that sun
orbited the earth, even worse those who believed the earth was spherical and not
flat would have been confined to a lunatic asylum.

Back to the problem of that leap day the 29th of Feburary.  The day is
the time it takes the earth to rotate on it's own axis, it is such a wonderful
and logical measurement of time that we don't want to mess with it.  It
makes no sense to make one day equal to 24 hrs and one minute, just to match
with the 365 1/4 days it takes to orbit the sun.

If such a stupid idea ever gained acceptance it would mean that every two
years 'Midnight' 0:00 would be at high noon.  Yet if every day was
precisely 24:00:00 and there were no leap years we get a new form of madness,
January the 1st would eventually occur at the spring equinox.

Early attempts by Romans to fix leap years every four years worked well
enough during their life time, but eventually the calendar suffered from the
fact that the award of leap years was based on imprecise calculation.

The fundamental problem is that the earth does not orbit the the sun in an
exact number of day, instead the period is 365.24219 days.  The point is
that if you have a leap year every 4 years eventually you will observe an error.
In itself, the error of 1 day in 138 years seems insignificant, but after 1,500
years Pope Gregory decided it was time to do something about the accumulated 11
day anomaly.

A tradition was introduced many centuries ago to allow women to propose
to men during a leap year. This privilege of proposing was restricted to
leap day in some regions.
Leap day was sometimes known as "Bachelors'
Day". Interestingly, Will and Guy have found that a man was expected to pay
a penalty, such as buy a dress or givemoney, if he refused a marriage offer
from a woman on this day - so men beware!

The tradition's origin appears to have stemmed from an old Irish tale
referring to St Bridget striking a deal with St Patrick to allow women to
propose to men every four years.

This old custom was probably made to balance the traditional roles of men
and women in a similar way to how the leap day balances the calendar.

It was also considered to be unlucky for someone to be born on a leap day
in Scotland and for couples to marry on a leap year, including on a leap
day, particularly, we have been told, in Greece.

Origins of the Leap Year
Proposal

Further research reveals that the right of every women to propose on 29th
February each leap year, goes back many hundreds of years to when the leap
year day had no recognition in English law [the day was "lept over" and
ignored, hence the term "leap year"].

It was considered, therefore, that as the day had no legal status, it was
reasonable to assume that traditions also had no status. Consequently, women
who were concerned about being "left on the shelf" took advantage of this
anomaly and proposed to the man they wished to marry.

It was also thought that since the leap year day corrected the
discrepancy between the calendar year of 365 days and the time taken for the
Earth to complete one orbit of the sun (365 days and 6 hours), it was an
opportunity for women to correct a tradition that was one-sided and unjust.

Middle-ages Correction
of the 11 'Lost' Days

Then when a correction is made to the calendar after centuries of ignoring
the leap day, people become upset.  This actually happened in the 16th
century when governments switched from the old Julian calendar to the modern
Gregorian calendar with it's leap days every 4 years.  To make the
correction, the governments had to 'lose' 11 days.

Footnote:
Please send us your amusing tales about
leap day and leap year.