The
Lammas festival on the 1st of August marks the beginning of the harvest.  What's
interesting about Lammas tide and the 7 other special Celtic days, is the way they give
the year structure, and also how they help to shape the pattern of the year.

The key to understanding these traditions is realising Lammas, means 'Loaf
Mass'.

The Place of Lammas
Day in the Calendar 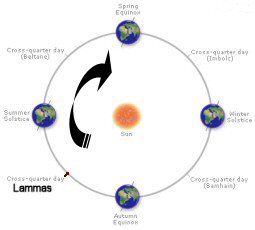 The Lamas festival on the 1st of August is significant because it falls
nearly midway between the summer solstice and the autumnal equinox.  The
other cross-quarter days correspond to the festivals of Candlemas (Imbolc),
Beltane (May Day), and Halloween.

Our ancestor weren't as precise as modern astronomers in
calculating these cross-quarter dates.  Furthermore, the exact date of
Lammas was often
fine-tuned to harvesting conditions prevalent at a particular latitude.

Lammas, or Lughnasadh, was one of the four main festivals of the medieval
Celtic calendar.  Imbolc (Candlemas), Beltane and Samhain being the
other three.  Whereas Candlemas is derived from 'Candle mass', the meaning of
Lammas is not obvious until you see the two words: loaf mass.  Given
that this festival marks the start of the wheat harvest, then the beauty and logic of
the Saxon word Lammas (Hlaf maesse or Leff messe) falls into place. 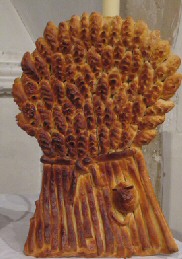 At the heart of the Lammas celebration was a religious service using bread made from the harvest's first flour.
What obscures many of these ancient carnivals is the way the earliest
Christian evangelists incorporated pagan festivals into Christian
celebrations; 'All Saints' an Halloween is another good example of
Christianisation of ancient festivals.

In Celtic mythology the Lammas ritual was based on a funeral feast where the Sun God Lugh
(hence Lughnasadh), commemorated his
foster-mother, Tailtiu, who died of exhaustion after preparing tirelessly
for the harvest.  Thus the festival revolves around bread made from the
first wheat grains of this year's harvest.  Incidentally, the fruits of
August would have been conceived by the gods at Beltane in May.

If you study other ancient European religions, especially those of the
Celts, then you will find parallel names, traditions and folk tales around
1st of August, for example,
Lughnasadh (Irish), L´┐Żnasdal (Scottish) and Calan
Awst (Welsh).  There also is a modern take on the festival of Lammas
with the play, 'Dancing at Lughnasa'.

Other Traditions Peripheral to Lammas

The Corn Dolly
Tradition at Lammas

It has to be said that in modern times the 'Corn Dolly' is mainly associated with the END
of the harvest, rather than the beginning.  However, our ancestors felt
less restricted by such conventions and they probably made Harvest Queens,
Corn Dollies,
or Kern Babies throughout the harvest season.

How to Make a Corn Dolly

I still feel guilty picking 20 wheat stems out of the 20 zillion stalks
in the field.  Even though he is not there, I can sense the farmer's
hackles rising, 'Damn Townies - they'll leave the gate open'.  Of
course I don't even open the gate preferring to climb over the nearby style.

Here is where you can buy a ready-made corn dolly

Corn rigs and barley rigs,
Corn rigs are bonny!
I'll not forget
that happy night
Among the rigs with Annie!