India can be considered to be a land of religion. With a total of 330
million gods, goddesses and demigods being mentioned in the sacred Hindu
scriptures it is natural that religion remains the cornerstone of the Hindu
religion.

Every year, periodical or annual fairs [festivals] are held on river
banks, lake-shores, beaches and sacred places by Hindus to commemorate
important events or in honour of Gods or Goddesses.

Pilgrims come from all walks of life, with a belief that their sins will
be washed off in the holy waters of the sacred river Ganges if they take a
dip during the Kumbh but the actual and more science based reasons appear to
be different. It is actually the position of stars and constellations during
the Kumbh that makes it significant to take a dip in the river at that time
we have learned.

Actually Kumbh Mela takes place during an auspicious planetary position
that is believed to medicate the Ganges waters with a concentration of
certain rays due to their position and turn the river into nectar. Millions
of devotees arrive to purify their inner self through holy bathing rituals.
It is thought by some, Will and Guy have discovered, that a lot of skin
diseases are cured during this time.

The numbers have to be seen to be believed. Over 30 million people gather
for the festival.
The Four Locations:

In common Hindu parlance, fairs are known as "Mela's". These "mela's"
find a mention in the great Hindu epics and sacred Sanskrit texts [Puranas]
and are a prominent feature of Hinduism from time immemorial.

To understand the significance of the Kumbha Mela and the important role
that it plays in the spirituality of India, it is helpful to know something
about the background of the sacred Ganges River. The devout believe that
simply by bathing in the Ganges one is freed from their past sins [karma],
and thus one becomes eligible for liberation from the cycle of birth and
death. Of course it is said that a pure lifestyle is also required after
taking bath, otherwise one will again be burdened by karmic reactions. The
pilgrims come from all walks of life, travelling long distances and
tolerating many physical discomforts, such as sleeping in the open air in
near freezing weather. They undergo these difficulties just to receive the
benefit of taking a bath in the sacred river at Kumbha Mela.

The most
important of these melas is the Kumbh Mela. A mass pilgrimage for the Hindu
community of India, the Kumbh Mela or Kumbh fair is rumoured to be one of
the largest congregation of sages, yogis, ascetics, mendicants, men, women
and children on the planet. It occurs four times every twelve years and is
organised in rotation among four places: Allahabad (Prayag), Haridwar,
Ujjain and Nashik.

The Maha Kumbh Mela periodically falls every 144 years or after 12 Purna
Kumbh Melas, at Allahabad. Kumbh Mela derives its name from the AmritaKumbha
[Pot of Nectar] described in the ancient Vedic scripture "çrémad-Bhägavatam".
In Sanskrit language, the word Kumbha means "pot or pitcher". Mela means
"festival". Thus Kumbh Mela literally translated means 'festival of the
pot,' that is, the pot of nectar.

This spectacle of faith has for many
centuries attracted the curiosity of foreign travellers. Hiuen Tsiang of
China, who lived during the seventh century, was the first to mention Kumbha
Mela in his diary. He gave an eyewitness report that during the Hindu month
of Magha [January-February] half a million people had gathered on the banks
of the Ganges at Allahabad to observe a celebration for 75 days. The
pilgrims, writes Hiuen Tsiang, assembled along with their king, his
ministers, scholars, philosophers, and sages. He also reports that the king
had distributed enormous quantities of gold, silver, and jewels in charity
for the purpose of acquiring good merit and thus assuring his place in
heaven. 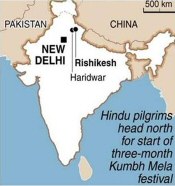 Map of India locating Haridwar and Rishikesh, where the three-month Hindu
festival of Kumbh Mela is held.  Braving chilly weather, hordes of
pilgrims rise before sunrise in and around the northern town of Haridwar and
made their way in darkness to the banks of the river to immerse themselves
in the sacred waters.

The Magh Mela is one of the greatest annual religious affairs for Hindus.  In accordance with the traditional Hindu calendar followed in North
India, this holy fair is organised every year during the Hindu month of Magh.
See more on Magh Mela

The Story Which Provides The Origin
of Kumbha Mela

The observance of Kumbha Mela is based upon the following story.

Many thousands of years ago, perhaps in the Vedic period, gods and demons
made a temporary agreement to work together in obtaining "amrita", the
nectar of immortality, from the Milky Ocean, and to share this equally.

However, when the Kumbha [pot] containing the amrita appeared, the demons
ran away with the pot and were chased by the gods.

For twelve days and twelve nights, the equivalent to twelve human years
we have learned, the gods and demons fought in the sky for the possession of
this pot of amrita.

It is said that during the battle, drops of amrita fell on to four
places: Prayag, Haridwar, Ujjain and Nasik.

Thus, Kumbha mela is observed at these four locations where the nectar
fell.

Footnote
Please send us your stories of Kumbha Mela.