Will and Guy's Collection of Nine Pub Jokes One Over The Eight!

An alcoholic is someone you don't like who drinks as much as you do. Dylan Thomas

1) Social Drinker - I'll Drink to that

1a) I'm just a social drinker, every time someone says, 'I'll have a drink'. I say, 'Social I.' 1b) An alcoholic is someone you don't like, and who drinks as much as you do.  Dylan Thomas

Mary was asleep in bed when her husband, Patrick, crashed through the front door at 3 am waking her up.  He staggered through the hallway and tried to get up the stairs. 'What are you doing?' Mary shouted. Patrick replied, 'I'm trying to get this gallon of beer up the stairs.' 'Leave it down there, Patrick', Mary bellowed. 'I can't, 'Patrick replied, 'I've drunk it.'
Lawyers Served in the Pub A man walked into a bar with an alligator under his arm and asked the bartender, 'Do you serve lawyers here'. 'Yes', said the bartender. 'Good', said the man, 'In that case I'll have a whisky, and a lawyer for my alligator'.

A Congressman in the USA was once asked about his attitude toward whiskey. 'If you mean the demon drink that poisons the mind, pollutes the body, desecrates family life, and inflames sinners, then I'm against it. But if you mean the elixir of Christmas cheer, the shield against winter chill, the taxable potion that puts needed funds into public coffers to comfort little crippled children, then I'm for it. This is my position, and I will not compromise.' See more politician jokes

4) A Snippet from a County Cork Newspaper:

Reilly's Bar: Due to the sad death of Shamus, the bar to all intents and purposes, will remain closed during our grief, but so as not to inconvenience our esteemed customers, the door will remain ajar.  Tis what Shamus wanted. Thank you. The Reilly family.

A man walks into a bar, sits down, and orders a drink. 'Hey, nice tie!' comes out of nowhere.  He looks up at the barman to see if he had said anything, but since he was on the other side of the bar the man just ignores it. 'Hey! Nice shirt!' The man looks up but, again, the barman is engaged elsewhere. 'Hey! Nice suit!'  The man then calls the barman over and asks him why he keeps talking to him. 'It's not me, it's the complimentary peanuts', said the barman.

Six retired Irishmen were playing poker in Monaghan's flat in Dungarvan when Sean O'Toole loses €700 on a single hand, clutches his chest and drops dead at the table. 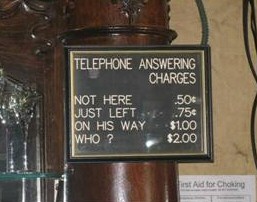 Showing respect for their fallen brother, the other five continue playing standing up.  Michael Lennon looks around and asks, 'Oh, me boys, someone's got to tell Sean's wife. Who will it be?' They draw straws.   Cavan Colquhoun picks the short one. They tell him to be discreet and gentle and not to make a bad situation any worse.' Discreet? I'm the most discreet Irishmen you'll ever meet.  Discretion is my middle name. Leave it to me.' announces Cavan. He goes over to O'Toole's house and knocks on the door.  Brenda O'Toole answers and asks what he wants. Cavan declares: 'Your husband just lost €700 and is afraid to come home.' 'Tell him to drop dead!' snarls Brenda.'  I'll go tell him.' says Cavan.

Electricity is actually made up of extremely tiny particles called electrons, that you cannot see with the naked eye unless you have been drinking.  Dave Barry 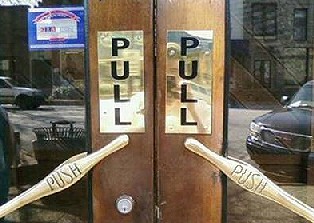 Neil was in a pub, extremely drunk. The barman, Simon, noticed this, and when Neil asked for another whisky, the barman politely told him that he was too drunk to be served another drink. Neil leaves. He walks out of the pub and in again at the side door and asks Simon for a double whisky. A little frustrated, Simon repeats the answer he had said earlier. Neil, again leaves and enters through a further side door, walks up to the barman and asks for a Scotch. Simon is now quite annoyed, and tells Neil he is too drunk and to get a ride home and leave the pub.

Once more, Neil leaves. Again he comes in, this time through the back door. Neil walks up to the barman and before he can say a word, Simon explodes at him, 'I told you already, you are way too drunk, you can not have another whisky. Get out of my bar!' Disgruntled, Neil glares at Simon and asks, 'Man, how many bars do you work at?'
She was only a whiskey maker, but he loved her still.

Doctor Clarke always stopped at his local pub after work for a hazelnut daiquiri  [a special drink the bartender created just for him]. One day, the Dermot, barman ran out of hazelnut flavour so he substituted hickory nuts instead. Doctor Clarke took one sip of the drink and exclaimed, 'This isn't a hazelnut daiquiri. Dermot!' 'No, I'm sorry', replied Dermot the barkeeper, 'it's a hickory daiquiri, doc.'

Niall and Ethan are two young lads from Shannon and they are lost in the Sahara desert. they're only desperate for water, but just as they think they're about to die, they chance upon an oasis where market day appears to be in full swing. They go to the first stall they see, and Niall asks if they can buy some water.'  No, 'replies the Bedouin stall owner, 'I only sell fruit. Try the next stall.' So off they stagger to the next stall and this time Ethan asks for some water.  'Sorry,' says the merchant, 'But I only sell custard'. 'Custard! Custard?' splutter the two. Niall turns to Ethan and shouts angrily, 'What kind of flippin' place is this?'  By now totally desperate, they go to the next stall, only to be told, 'Sorry, but I only sell jelly.' Hearing this, Ethan says to Niall and speaks through clenched teeth, 'Bejabbers, Niall - this is a trifle bazaar.' 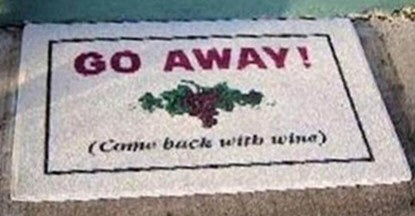 Footnote: P.S. Please write to Will and Guy if you know of a good pub joke The trouble with jogging is that the ice falls out of your glass. Martin Mull