Kindly sent in by Arthur Burley

It's mid-September and school has
been back for a while.  The children and their teachers are getting to know one another; here are some of their exchanges.

The math teacher saw that Daphne wasn't paying attention in class.  She called on her and said, 'Daphne!  What are 2 and 4 and 28 and 44?'

Stand |Up and Be Counted

A new teacher was trying to make use of her psychology courses. She started her class by saying, 'Everyone who thinks they're stupid, stand up!'

'No, ma'am, but I hate to see you standing there all by yourself!'

Caught with an
Axe in his hand

Mr Harris, the 3rd grade teacher asked, 'George Washington not only chopped down his father's cherry tree, but also admitted it.  Now, Iris, do you know why his father didn't punish him?'

Iris replied, 'Because George
still had the axe in his hand?'

Little Ronnie's kindergarten class was on a field trip to their local police station where they saw pictures tacked to a bulletin board of the 10 most wanted criminals.  One of the youngsters pointed to
a picture and asked if it really was the photo of a wanted person.

'Yes,' said the policeman. 'The detectives want very badly to capture him.'

Little Ronnie asked, 'Why didn't you keep him when you
took his picture?'

One day before school, Little Susie watched, fascinated, as her mother
smoothed cold cream on her face.
'Why do you do that, mommy?' she asked.  'To make myself beautiful,' said her mother, who then began removing the cream with a tissue.

'What's the matter?' asked
Little Susie. 'Are you giving up?'

One way to explain the word marriage to a child:

Claire was a typical three year old: pretty, friendly, cute, inquisitive, and
bright as a sixpence. However, one day, Claire showed some difficulty in
grasping the concept of marriage. Robert, her father, thought the best way to
teach her was to show her his wedding photo album believing that visual images
would help Claire's understanding.

One page after another, he pointed out photographs of the bride arriving at
the church, the entrance, the actual wedding ceremony, the signing of the
licence and the reception afterwards.

'Now do you understand, darling?' Robert enquired smiling.
'I think so,' responded Claire dutifully, 'and is that when mummy came to work
for us?' 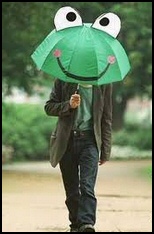 A first grade teacher handed out a coloring page to her students - on it
was a picture of a frog holding an umbrella.  When the class handed
them in, one little boy had colored the frog bright purple. The teacher
scolded him, asking, "How often have you seen a purple frog?"

The little boy answered, "The same number of times I've seen a frog
holding an umbrella."

Father George, the priest, was speaking to a group of children about the resurrection of Jesus when one pupil asked, 'What exactly did Jesus say right after He came out of the grave?'

Father George
carefully explained that the Gospels do not tell us what He said.