Car
Joke Picture - How Did She Do THAT

As ever, Will and I try to alter names and pictures to protect the guilty.

Hilarious Tale of a Woman Driver: With a Happy Ending 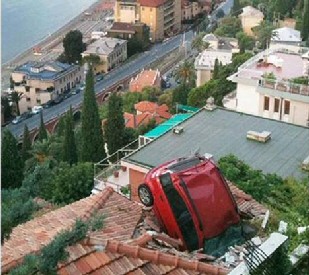 The Fiat Panda broke through the roof and landed in the bathroom, with
the front end wedged in an iron bath which broke the fall and stopped the
red car plunging further into the house.

Last Saturday night Kate returned home very late from a party.
The
next morning her father, Roger, went out to the drive to get the newspaper
and came back into the house frowning.

At 11:30am Kate sleepily walked into the kitchen, and her father asked
her, 'Darling, what time did you get in last night'

'Not very late, Dad,' Kate replied nervously as she thought about being
allowed to continue borrowing the car.  With a dead pan face Roger
continued, 'Then, my little angel, I'll have to talk with the paperboy about
putting my paper under the front tyre of the car.'

No
Wonder They Are Introducing - Parking for Women Only!

Follow-up - This Is
What The Lady Wished For

Always be careful what you wish for.  Think ahead, what will actually happen if your wish comes true?  Just when you think that your situation could not get any worse.

There may be trouble
ahead
Love and Romance
Music and Moonlight

Certainly not a barrel of fun

Murphy's
wife borrowed his car and parked in the supermarket car park.  Just as she came out laden with shopping, she saw a young lad break into the car, hot wire it and drive off.  Naturally she
reported the matter to the police.  'What did he look like?', the sergeant asked.  'I don't
know she replied, but I got the licence plate'.

Stick In The Mud?

To redress the gender balance, here are a couple of fellows stuck in the mud.  Don't you just love it
when those off-road vehicles get their comeuppance?

People Really Do Park Like This, Says Will, 'I've Seen Them!'

Footnote:
If you have any similar funny car pictures, then do send them to us.