Jewish Nuptuals - The Celebration and the Humour

A Jewish wedding is one of the cornerstones of the Jewish life cycle and
as with all religions, is a great cause for celebration, and a source of
humour.

A young woman brings home her fiancé to meet her parents. After dinner,
her mother tells her father to find out about the young man. The father
invites the fiancé to his study for a drink.

'So what are your plans?'
the father asks the young man.
'I am a Torah scholar,' he replies.

'A Torah scholar. Hmmm,' the father says. 'admirable, but what will you do
to provide a nice house for my daughter to live in, as she's accustomed to?'

'I will study,' the young man replies, 'and God will provide for us.'

'And how will you buy her a beautiful engagement ring, such as she
deserves?' asks the father.

'I will concentrate on my studies,' the
young man replies, 'God will provide for us.'
'And children?' asks the
father. 'How will you support children?'

"Don't worry, sir, God will
provide," replies the fiance.
The conversation proceeds like this, and
each time the father questions, the young idealist insists that God will
provide.

Later, the mother asks, 'How did it go, darling?'
The
father answers, 'He has no job and no plans, but the good news is, he thinks
I'm God.'

A Jewish mother is walking with her small son along the shore, enjoying
the sounds and smells of the ocean. Suddenly, without warning, a huge wave
comes in and washes the boy out to sea. The woman screams, but no one is
nearby, and she can't swim. She sees her son's head bobbing up and down as
he cries for help and moves farther and farther from shore.

Desperate,
she sinks to her knees in the sand. Pleading with God for mercy, she swears
she will devote herself to good causes and be faithful in attending
synagogue if God will spare her only child.

Suddenly another huge wave
crashes in, and deposits her son, wet but unhurt on the sand. She lifts her
face to the heavens, extends both arms and cries...
'My boy had a HAT!'

'The Jewish people have observed their 5773rd year as a people,' the
Hebrew teacher informed his class. "Consider that the Chinese have observed
only their 4710th. What does this mean to you?"

After a reflective pause, one student volunteered, 'Well for one thing,
acording to my calculation the Jews had to do without Chinese food for 1063 years.'

What's the Man Made of?

The lights suddenly fail in Sheldon and Miriam's Tottenham flat. They
hear the sound of glass breaking - there are looters in the street below.

"Sheldon, there's a mink coat in the window of Goldberg's - do you think
we might...?"

"I don't like it Miriam, But you've been a good wife and
I know how you've always yearned for mink, and I've never been a rich man.
OK, just this once. Who's to know?"

So they go to Goldberg's, Sheldon
throws a brick through the window, and Miriam gets her fur. As they turn to
go, Miriam spots a 42" flat-screen TV in the window of Keitzner's
Electricals,. "Oh, Sheldon. look ...?" In goes another brick, out comes the
TV.

As they go home, they pass a jeweller. "Sheldon, look at that
beautiful necklace! One more little thing won't make any difference."

"Oh for God's sake, woman! Do you think I'm made of bricks?"

Jewish weddings are filled with tradition, ritual, and beauty; and not all
Jewish weddings are alike. Depending upon the background of the
participants, service may vary. Younger Jews are increasingly adding their
own "flavour" to their ceremonies.

Will and Guy aim here to give you a generalised picture of the occasion.
Basic Jewish Wedding Traditions: 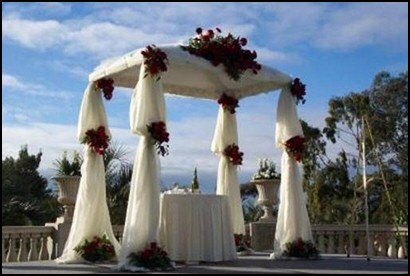 Footnotes:
If you have any good Jewish wedding jokes, then please send them to
us.