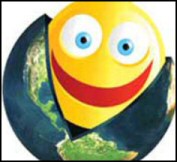 Will and Guy bring you a collection of humorous stories and pictures to
celebrate this happy day.

It was the tiny country of Bhutan who proposed the idea for a happy day, and
they should know as they institued the Gross National Happiness (GNH) index
back in the 1972.  Their seven happiness components are: Economic,
Environmental, Physical, Mental, Workplace, Social and Political.  From
successive surveys, Central American countries such as Costa Rica emerge as
the happiest.

The United Nations were clever in matching Happiness day to the Vernal
Equinox *, which usually falls on March 20th.  Each year there are two
days of equal sunlight, this celebrates that special day in the spring.

Cat Story with a Happy Ending

A frightened feline that was lodged in a tall tree for a week, was finally hosed to
safety with a high-pressure fire hose.  Locals held an outstretched sheet and made the catch as the cat, soaked and hungry but unharmed, was hosed out of the tree by fire fighters last week in Yonkers, New
York, USA.

'Everyone was cheering,' said artist and animal rescuer Greg Speirs,
who was among about 50 people assembled beneath the willow tree.  The cat had previously ignored people who banged cans of cat food and climbed ladders that proved to be just out of reach.  It took two shots
with the hose to do the trick.

'As soon as the cat landed it jumped out and ran into the woods,' Speirs reported to the New York Daily News.

'Some kids helped us bring the cat back, and a man said he would
adopt the cat right on the spot,' Speirs added.  'You can't come up with a nicer ending than that. 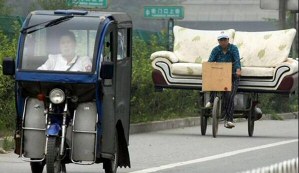 It's Amazing How
Animals Bring Us Happiness