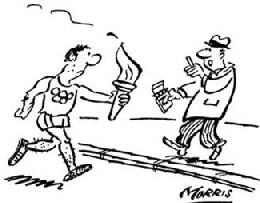 Will and Guy's collection of interesting Olympic facts.

The famous wrestler Milo was said to train by carrying a calf every
day.  As the calf grew heavier, his muscles got stronger.

Ten True and
Funny Interesting Facts from Past Olympic Events

Interesting Facts about the London 2012
Olympics

Olympic sites are chosen by secret ballot, so we're not sure how
London beat Paris for the 2012 Summer Olympics. Some blame French
President Jacques Chirac, who insulted Britain before the vote by
saying, "After Finland, it's the country with the worst food."
France's bid wasn't getting British support anyway, but Finland had two
IOC members, and some speculate that they were swing votes in the 54-50
outcome. 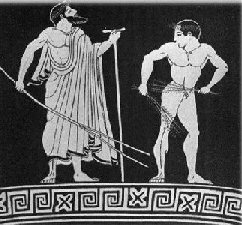 Pelops, a prince from Lydia sought the hand of the daughter of King
Oinomaos of Pisa, namely Hippodamia. Oinomaos had declared that his
daughter's suitors should compete with him in a chariot race; winning it
he gets Hippodamia as his wife; but on losing it, he would be beheaded.

Pelops with his charioteer Myrtilos secretly replaced the bronze
linchpins of the King's chariot with wax linchpins. During the race, the
wax melted and Oinomaos was thrown from his chariot and died. Pelops and
Hippodamia got married and Pelops celebrated his victory with the
Olympic Games.

According to another myth, poet Pindar, in his Olympian Ode, tells
the tale of how King Augeas of Elis reneged on his promise to reward
Herakles for cleaning his stables. Herakles attacked and sacked Elis and
started the Olympic Games in honour of his father Zeus.