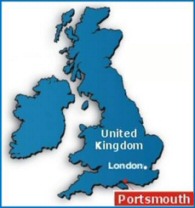 Here are engrossing snippets about Portsmouth, Will lives just down
the road at Portchester.

The Location of
Portsmouth, England

Portsmouth is notable for being the United Kingdom's only island city; it
is located mainly on Portsea Island. It is situated 64 miles (103 km) south
west from London and 19 miles (31 km) south east of Southampton.

The City of Portsmouth and Portsmouth Football Club are both nicknamed
Pompey. See how

Pompey held the FA Cup for 7 years, longer than any other team.

Although smaller than in its heyday, the naval base remains a major
dockyard and base for the Royal Navy and Royal Marine Commandos whose
Headquarters resides there.

There is also a thriving commercial ferry port serving destinations on
the continent for freight and passenger traffic.

As a significant naval port for centuries, Portsmouth is home to the
world's oldest dry dock still in use and also home to some famous ships,
including HMS Warrior, the Tudor carrack Mary Rose and
Lord Nelson's flagship, HMS Victory.

50
Interesting Facts About Portsmouth and its People

The facts gathered below are compiled by Portsmouth historian John
Sadden, "Portsmouth - A Pocket Miscellany" is crammed with curious facts
both historical and bang up-to-date. John, 53, who was born in the city and
is also the archivist at Portsmouth Grammar School, says, 'I compiled the
book last summer [2011] and it was a fascinating exercise in Portsmouth both
ancient and modern. 'I tried to create a balance between some of the
statistical stuff and the more colourful tales from the city's past.'

The book is what it says on the tin - pocket-sized.

Portsmouth - A Pocket Miscellany is published by The History, priced
£5.99.

It contains fascinating, and sometimes, quite amusing, facts of Will's
home town.

1. Portsmouth's motto, 'Heaven's Light Our Guide', was the slogan of the
Order of the Star of India and appeared on troop ships. Rifles, revolvers,
scimitars and daggers engraved with the message were distributed in India.

2. The Anglo-Saxon Chronicle, compiled in the ninth century, states that
in AD 501 'Port and his two sons Beida and Maegla came to Britain with two
ships in the place which is called Portes mutha, and killed a young British
man, a very noble man.'
It is the first known appearance of the name
Portsmouth in a written source.

4. The area known as Milton is a corruption of Middleton, a common next
to Welder (Velder) heath. It was a small village, but now has a population
of 13,800 and average household income is £34,000.

5. Portsmouth appears on the oldest surviving route map of Great Britain,
the Gough Map, which dates from about 1360 and shows 600 towns and cities.
Portsmouth is labelled Portis Mouth and is represented by a single
red-roofed building.

6. Squeeze Gut Alley, what a lovely name, was a popular name for Messum's
Court, which ran from Prospect Row to St Mary's Street in what is now Old
Portsmouth. The eastern end of it was very narrow.

7. It is 9,366 miles from Portsmouth to Uluru, the massive sandstone rock
in central Australia that used to be known as Ayer's Rock. It was named
after Sir Henry Ayers who was born in Portsea in 1821, the son of a dockyard
worker, and who was the premier of South Australia five times.

8. There are Portsmouths in Iowa, New Hampshire, Ohio, Portland (Oregon),
Rhode Island, Virginia and Michigan. A fishing village in North Carolina
with the name was abandoned in 1971.

11. The top floor penthouse at Gunwharf Quay's 'lipstick' tower, which
has an area of 4,000sq ft and enjoys 360-degree views, was valued at £4m in
2009. From the penthouse you can see the Charles Dickens ward where 56.6 per
cent of children live in poverty.

12. Reputedly, the narrowest occupied domestic residence in Britain is in
Manor Road, Fratton. Built around 1900, the frontage is 4ft 10in (147 cm)
wide.

13. The development of the IBM site on reclaimed land at North Harbour
between 1967 and 1982 resulted in the largest office building in the UK at
the time.

14. The first centrefold to display full-frontal nudity in a magazine is
believed to have been of Portsmouth-born Marilyn Cole, who also has the
distinction of becoming the only British model to be Playboy's Playmate of
the Year.

15. In 1917 Portsmouth was the first town in the country to open clinics
for the free treatment of venereal disease.

16. HMS Bounty set sail from Portsmouth for Tahiti under the command of
Captain Bligh on the first breadfruit voyage in 1787. His mission was to
pick up breadfruit plants and transport them to the West Indies to become a
cheap source of food for slaves. It all went horribly wrong.

17. Jonas Hanway was born in Portsmouth in 1712. He inherited a fortune
and began a career as a philanthropist. He is also remembered for being the
first person in England to use an umbrella. Who knows these things asks
Will?

18. The first co-operative society in Britain was set up in Portsmouth in
1796 by dockyard workers fed up with being ripped off by tradesmen. The aim
was to offer an alternative by organising and controlling the production and
distribution of goods and services under a system operated by and for the
people.

19. Jack the Painter, one of several names given to an arsonist, has been
described as the first modern terrorist. He planted an incendiary device in
the dockyard rope house in 1776, 171 years after Guy Fawkes's Gunpowder
Plot. He was hanged from the highest gibbet in Britain, 65ft above the
dockyard gates.

20. The Portsmouth ball-valve is the most common type of valve used in
toilet cisterns.

21. 'Seedy at times, grim in places, but colourful and tinted with the
hues of history' - cricket commentator and author John Arlott writing on
Portsmouth in 1969.

22. 'I appeared on a stage three times and died a bloody death. I could
hear myself walk off the stage' - Spike Milligan bemoaning Portsmouth on
Room 101, 1999.

23. 'If Portsmouth wasn't there the south coast would fray around the
edges. People in Southsea would just fall into the sea' - Paul Merton
[Comedian not professional football player] defending Portsmouth against Spike Milligan on
Room 101, 1999. 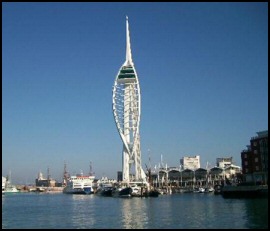 25. Wymering Manor is said to be the oldest building in the city, having
been recorded in the Domesday Book of 1086.

28. Estimates of the number of prostitutes working in the port and
garrison town at the end of the 18th century vary between 2,000 and 20,000.

29. In 1825 John Johnson and Henry Andrews were caught with a large and
heavy trunk about to catch the London coach. They had taken receipt of it at
the Star pub near The Hard, their fifth such trunk of the month. The corpses
in the trunks - much sought after for anatomical teaching in medical schools
in the capital - had been ferried across the harbour from Haslar burial
ground.

30. Wild rabbits caught on Portsea Common - enclosed within the dockyard
in 1864 - were permitted to be taken home by workers. Later, it also applied
to any government material that was smuggled out. A 'rabbit job' was a piece
of DIY carried out in work time.

32. Roy Horniman, who lived at Southsea and went to Portsmouth Grammar
School in the 1880s, wrote the source novel for the Ealing black comedy Kind
Hearts and Coronets which starred Alec Guinness.

33. Approximately 6,000 trees were used in the construction of HMS
Victory. The oak used in the underwater planking came from Poland and East
Prussia and is two feet thick at the waterline.

35. George Meredith, the Victorian novelist and poet, was born at 73,
High Street in 1828, the son of a tailor. He spent a miserable childhood in
the town and later took to affecting vagueness about his origins.

36. Writer HG Wells was bored rigid during the two years he spent as an
apprentice at Hide's Drapery Store, King's Road. He later recalled that the
period 1881-1883 was 'the most unhappy hopeless period of my life'.

37. The first league game to be played under floodlights took place on
February 22nd , 1956, between Pompey and Newcastle. Pompey lost 2-0.
Contrary to opinion, Will confirms that he was NOT at the game.

38. 'Pompey Lil' was a well-known prostitute who worked in Portsea in the
early to mid-20th century. She was said to have no teeth and a false eye,
but was 'ever so nice' and 'well spoken'.

39. Musician and composer Brian Eno played clarinet in the Portsmouth
Sinfonia and produced their first two albums. He became a member of Roxy
Music and a pioneer of ambient music.

40. In 1899 James Higgins, 68, was charged with mutilating a copy of the
Portsmouth Times at the public library 'doing damage to the amount of one
penny'.

41. In 2003 Tate art gallery experts discovered that two Turner paintings
of Venice were actually of Portsmouth.

42. Rat Island in Portsmouth Harbour is said to have acquired the name in
the 19th century. The rats gathered there to gorge themselves on discarded
washed-up entrails from the abattoir at nearby Royal Clarence Victualling
Yard.

43. A fish was landed in Portsmouth in 1870 with a champagne bottle in
its stomach. Throw in some chips and you've got all the ingredients of a
good night in.

44. In 1860 a man got out of his bath and stood at his window in Penny
Street, Old Portsmouth, 'wearing only his spectacles'. Magistrates found him
guilty of indecent exposure and sentenced him to one month's imprisonment
with hard labour. His name was Mr Little.

45. Former prime minister William Pitt the Elder was involved in a freak
accident in Portsmouth in the 19th century. A gale blew in a window of the
Queen's Room, Portsea, and shards of glass sliced through his neck. Mr
Allsop, who owned the waxwork collection, was not best pleased.

46. In 1846 a doctor, lamenting the lack of sewers, warned that 'the
island of Portsea is one large cesspool'. Two years later an outbreak of
cholera killed 152 residents, many of them children, and the following year
a further 800.

47. The Royal George was being repaired at Spithead on August 29th , 1782
when a sudden breeze apparently forced her over, water poured in and she
sank in an instant. About 1,000 members of the ship's company died with up
to 300 women and 60 children.

48. There was a popular belief in the city that if the bust of Charles I
was removed from the wall of the Square Tower, Old Portsmouth, then grave
misfortune would fall upon Portsmouth. In 1937 it was taken down and loaned
for a Royal Academy exhibition. Within four years much of the city was in
ruins. [The Blitz in the 2nd World War]

49. On a visit in 1729, S Martin Leake described Portsmouth Point as
Gomorrah, pairing it with the notorious Gallows Point in Jamaica, which had
a reputation for being like Sodom.

50. The actress Helena Bonham Carter is the great-great-granddaughter of
John Bonham Carter, MP for Portsmouth from 1816-1838.

Other famous characters either from Portsmouth or who lived there include
Charles Dicken the 19th century author and the late comedian Peter Sellers.

Rudyard Kipling, poet and author of the Jungle Book, H. G. Wells author,
lived in Portsmouth during the 1880s.

While other notable people include Sir Isambard Kingdom Brunel Famous
Engineer of the Industrial Revolution, was born in Portsmouth.

John Pounds the founder of the Ragged school, which provide free
education to working class children, lived in Portsmouth and replica of his
workshop and first school exists in Old Portsmouth.

Hertha Ayrton, a scientist and Suffragette was born in Portsea.

Helen Duncan, last woman imprisoned under the 1735 Witchcraft Act in the
UK was arrested in Portsmouth and, would you believe, Arnold Schwarzenegger,
lived in Portsmouth for a short time.

Footnote:
Please send us your interesting facts about
Portsmouth.