My Name is Rose

The Difference Between Growing Old and Growing Up

The first day of school our professor introduced himself and challenged us to get to know someone we didn't already know. I stood up to look around when a gentle hand touched my shoulder. I turned around to find a wrinkled, little old lady beaming up at me with a smile that lit up her entire being. She said, 'Hi handsome. My name is Rose. I'm eighty-seven years old. Can I give you a hug?' I laughed and enthusiastically responded, 'Of course you may!' and she gave me a giant squeeze. 'Why are you in college at such a young, innocent age?' I asked. She jokingly replied, 'I'm here to meet a rich husband, get married, and have a couple of kids...' 'No seriously,' I asked. I was curious what may have motivated her to be taking on this challenge at her age. 'I always dreamed of having a college education and now I'm getting one!' she told me. After class we walked to the student union building and shared a chocolate milkshake. We became instant friends. Every day for the next three months we would leave class together and talk nonstop. I was always mesmerized listening to this "time machine" as she shared her wisdom and experience with me. Over the course of the year, Rose became a campus icon and she easily made friends wherever she went... She loved to dress up and she revelled in the attention bestowed upon her from the other students. She was living it up. At the end of the semester we invited Rose to speak at our football banquet. I'll never forget what she taught us. She was introduced and stepped up to the podium. As she began to deliver her prepared speech, she dropped her three by five cards on the floor. Frustrated and a little embarrassed she leaned into the microphone and simply said, 'I'm sorry I'm so jittery. I gave up beer for Lent and this whiskey is killing me! I'll never get my speech back in order so let me just tell you what I know.' As we laughed she cleared her throat and began, ' We do not stop playing because we are old; we grow old because we stop playing. There are only four secrets to staying young, being happy, and achieving success. You have to laugh and find humour every day. You've got to have a dream. When you lose your dreams, you die. We have so many people walking around who are dead and don't even know it! There is a huge difference between growing older and growing up. If you are nineteen years old and lie in bed for one full year and don't do one productive thing, you will turn twenty years old. If I am eighty-seven years old and stay in bed for a year and never do anything I will turn eighty-eight. Anybody can grow older. That doesn't take any talent or ability. The idea is to grow up by always finding opportunity in change. Have no regrets. The elderly usually don't have regrets for what we did, but rather for things we did not do. The only people who fear death are those with regrets.' She concluded her speech by courageously singing 'The Rose **.' She challenged each of us to study the lyrics and live them out in our daily lives. At the year's end Rose finished the college degree she had begun all those years ago. One week after graduation Rose died peacefully in her sleep..... Over two thousand college students attended her funeral in tribute to the wonderful woman who taught by example that it's never too late to be all you can possibly be.

These words have been passed along in loving memory of ROSE.

REMEMBER, GROWING OLDER IS MANDATORY, GROWING UP IS OPTIONAL. We make a Living by what we get. We make a Life by what we give..... God promises a safe landing, not a calm passage. If God brings you to it, He will bring you through it. 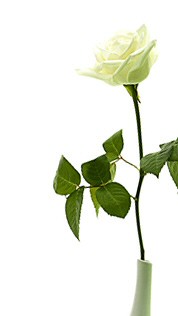 The Whale - A Beautiful and Inspirational Tale

Will and guy have been sent this report by two of our regular contributors to the site - Maggie Nutt and John Reeves. We are grateful for their additions. 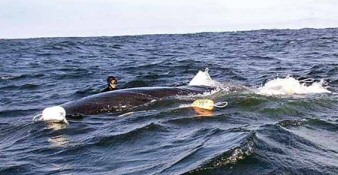 A female humpback whale had become entangled in a spider web of crab traps and lines. She was weighted down by hundreds of pounds of traps that caused her to struggle to stay afloat.  She also had hundreds of yards of line rope wrapped around her body, her tail, her torso, a line tugging in her mouth. A fisherman spotted her just east of the Faralon Islands [off the coast of San Francisco, California, USA] and radioed for help. Within a few hours, the rescue team arrived and determined that she was so badly off, the only way to save her was to dive in and untangle her. A very dangerous proposition as one slap of the tail could kill a prospective rescuer. They worked for hours with curved knives and eventually freed her. When she was free, the divers say she swam in what seemed like joyous circles. She then came back to each and every diver, one at a time, nudged them, and pushed gently, thanking them.  Some said it was the most incredibly beautiful experience of their lives. The man who cut the rope out of her mouth says her eye was following him the whole time, and he will never be the same. May you and all those you love, be so fortunate as to be surrounded by people who will help you get untangled from the things that are binding you and may you always know the joy of giving and receiving gratitude.

A grandmother and a little girl whose face was sprinkled with bright red freckles spent the day at the zoo.  The children were waiting in line to get their cheeks painted by a local artist who was decorating them with tiger paws. 'You've got so many freckles, there's no place to paint!' a boy in the line cried. Embarrassed, the little girl dropped her head. Her grandmother knelt down next to her. 'I love your freckles,' she said. 'Not me,' the girl replied. 'Well, when I was a little girl I always wanted freckles,' she said, tracing her finger across the child's cheek. 'Freckles are beautiful!' The girl looked up. 'Really?' 'Of course,' said the grandmother. 'Why, just name me one thing that's prettier than freckles.' The little girl peered into the old woman's smiling face. 'Wrinkles,' she answered softly. See our inspirational 6 blind mice elephant story.

What's your excuse? Your attitude towards life defines not only who you are, but the quality of life you are after. 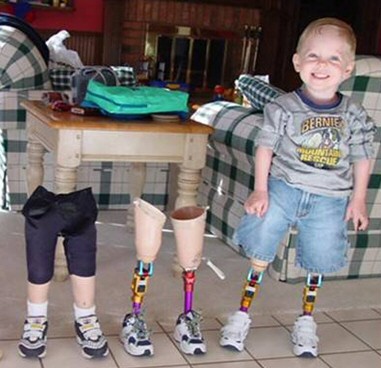 Hi! I just wanted to say that I am this little boy's mom!  His name is Cody McCasland and he will be 8 years old next month. We have just gotten news of this post and email that is being spread around and are very touched.  If you would like to learn more about Cody, please visit his website. Thanks! 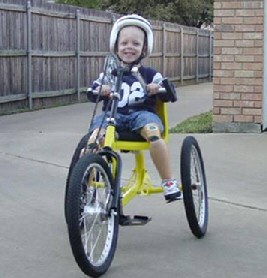 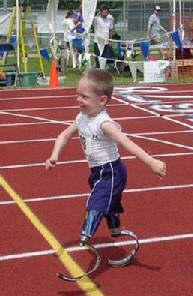 Whatever it is that has been bugging you, doesn't seem so bad anymore, does it? 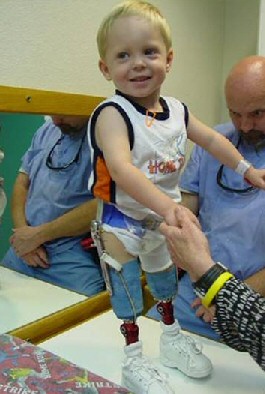 If only we all could have the spirit that this little boy has. And look at his beautiful smile.

George - Another of Our Inspirational Short Stories

It was a normal, busy morning, about 8:30 when, George, an elderly gentleman, well into his 80's, arrived at Queen Alexandra Hospital, Cosham, England, to have stitches removed from his thumb. George told me that he was in a hurry as he had an appointment at 9:15 am. I weighed him and took his blood pressure and invited him take a seat in the waiting area, knowing it would be over an hour before someone would be able to see him. I saw him looking at his watch and decided, since I was not busy with another patient, I would evaluate his wound. On examination, it was well healed, so I talked to one of the Doctors, got the needed supplies to remove his sutures and redress his wound. While taking care of his wound, I asked George if he had another doctor's appointment this morning, as he was in such a hurry.  George told me no, but that he needed to go to St Christopher's Nursing Home to eat breakfast with his wife. I inquired as to her health. He told me that she had been there for a while and that she suffered from Alzheimer's disease. As we talked, I asked if she would be upset if he was a little late. George replied that she no longer knew who he was and that she had not recognized him in five years. I was surprised, and asked him, 'And you still go every morning, even though she doesn't know who you are?' He smiled as he patted my hand and said, 'She doesn't know me, but I still know who she is.' I had to hold back tears as George left, I had goose bumps on my arm, and thought, 'That is the kind of love I want in my life.' Footnote: Please send us your inspirational short story.