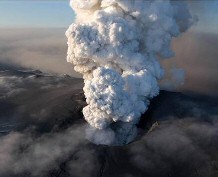 It's a bit early for Iceland volcano jokes. We should wait awhile for the dust to settle. 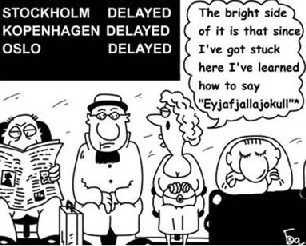 This volcanic ash cloud is totally disruptive as my wife and mother in law have been stuck at the airport for eight days now. They keep phoning, moaning and complaining; they even phoned whilst I was on the golf course this morning. Still I suppose I could get the car out and go to London Gatwick Airport tomorrow and pick them up; it's not that far really!

Will and Guy's Funny Summary of the Recent Iceland Volcanic Eruption 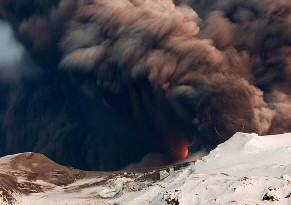 I nearly blew my top when I heard about the Icelandic Volcano. The news exploded around the world and across the internet. I thought it was a huge Volcano and the news left me trembling and quaking in my shoes. There were a lot of people spewing false information, and many were just full of hot air. That funny man on YouTube, who shouted, 'I hate Iceland!', was just blowing off steam. Most of the ash cloud talk was going over my head. I especially had trouble trying to pronounce EyJ -Eyjaf -Eyjafjall - oh forget it! Eyjafjallajökull Not only is the volcanic dust cloud disrupting air traffic, it is causing many ashen faces around Europe. I'm so tired of the old Geysir jokes about Ashland! The whole situation is so lavable but most of the jokes have not made me erupt with laughter! Iceland has taken a lot of criticism. However, let's clear the air. When the dust settles, we will understand that it wasn't Iceland's fault. Now that Iceland is in the news so much, I wonder if it will become a tourist hotspot! 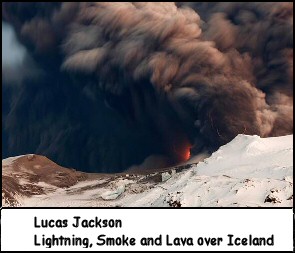 How to Pronounce Eyjafjallajökull

AY-uh-fyat-luh-YOE-kuutl-uh . For clarity, that's that is -ay as in day, -fy as in few, -oe as in French "coeur", -uu as in boot, the -tl as in atlas. The (-uh) is "a" as in ago, explains the BBC's pronunciation unit. In Icelandic, "Eyja" means island, "fjall" or "fyjoll" means mountain, and "jökull" means glacier - so "the islandmountainglacier volcano" might suffice for those still struggling Will and Guy suggest. 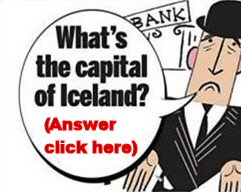 No it's not Reykjavik, see here for the answer Footnote: Please send us your funny Iceland ash jokes.