Two moose hunters, Wally and Jeff, from New Mexico, fly to a remote area in Alberta, Canada. They have a fabulous hunting expedition and both manage to shoot a large moose.

When the plane returns to pick
them up, Ronnie, the pilot looks at the animals and says, 'This little plane won't lift all of us, the equipment, and both of those animals. You'll have to leave one. We'd never make it over the trees on the
take off.'

Yep,' agrees Jeff, 'you're just a cowardly custard. We came out here last year and got two moose and that pilot had some guts. He
wasn't afraid to take off!'

'Mmmm,' adds Wally, 'and his plane wasn't any bigger than yours, Ronnie.'

Ronnie becomes cross, as well, and snaps, 'Dang me, if he did it, then I can do it! I can fly as well
as anybody'

Wally and Jeff load up the plane; they taxi at full throttle and the plane almost makes it, but doesn't have the lift to clear the trees at the end of the lake. It touches the tree tops, flips,
and breaks up. Everything scatters; the baggage, animal carcasses, and passengers.

Still alive, but dazed, Ronnie pilot sits up, shakes his head to clear it, and mumbles, 'Where are
we?'

Wally appears dishevelled from behind a shrub, looks around and replies, 'Oh.....I'd say ... about a hundred metres further than last year.'

Police in Florida are using a very realistic robotic deer to trap
potential poachers. After firing several shots, the miscreants are shocked
and amazed to see the creature still standing … then they are promptly
arrested.

Josh and Olly
are hunters and they are dragging their dead deer back to their truck after a successful expedition. As they go they meet another hunter, who is pulling his deer along too, who shouts to them both, 'Oiga! I
don't want to tell you how to do something ... but I can tell you that it's much easier if you drag the deer in the other direction. Then the antlers won't dig into the ground.'

The third hunter leaves and
Josh and Olly decide to try to do exactly what he has suggested.

Some considerable time later Josh says, 'You know, Olly, that man was right. This is an awful lot easier!'

'Yep, Josh, but we're getting
farther from the truck,' moans Olly. 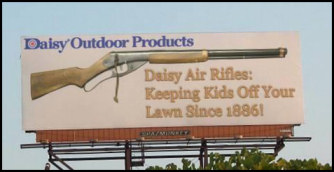 We heard last week that a California man, called Cedric Klabo, had been
put under 24-hour psychiatric observation.  What had he done?
Police found that he had over 75 guns and about a half a million rounds of
ammunition stored in his locked-up garage.

A roving reporter was heard to say:  "Gee! Cedric has half a million
machine gun bullets!"  A local paper, the Aubern Gazette, ran the
headline: "Massive Weapons Cache in Aubern County". 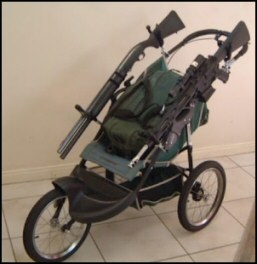 In Miami there were some unfortunate shootings and robberies of foreign
tourists. It was during this time, a Native American was staying at a Miami
hotel. Without thinking, he dressed, putting on his favorite tee shirt.

He and his wife got on the crowded elevator and realized the other
passengers were staring at him; they exited very quickly. He looked down and
realized he had put on a shirt which showed his 'ancestors' carrying rifles
with the quote, "If it's tourist season, why can't we shoot them?"

Quickly, he returned to his room and changed shirts.

These might bring a smile to your face whether or not you are a fisherman:

1) Catch and Release:
This is a conservation term that happens right before the local Fish and Game Protection Officer stops your boat when you have caught over the limit.

2) Hook: (i) A small curved piece of
metal used to catch fish. (ii) A clever advertisement to entice a fisherman to spend his live savings on a new rod and reel. (iii) The punch administered by said fisherman's wife after he spends their life
savings [see also, right hook, left hook].

3) Line: Something you give your colleagues when they ask on Monday how your fishing went over the weekend.

4) Lure: An object that is semi-enticing to fish,
but will drive an angler into such a frenzy that he will charge his credit card to the limit before exiting the tackle shop.

5) Reel: A weighty object that causes a rod to sink quickly when dropped
overboard.

6) Rod: An attractively painted length of fibreglass that keeps an angler from ever getting too close to a fish.

8) Tackle: What your last catch did to you as you reeled him in, but just before he wrestled free and jumped back overboard.

9) Tackle Box: A box shaped amazingly
like your comprehensive first aid kit. Only a tackle box contains many sharp objects, so that when you reach in the wrong box blindly to get an elastoplasts [band aid], you soon find that you need more than
one.

10) Test: (i) The amount of strength a fishing line affords an angler when fighting fish in a specific weight range. (ii) A measure of your creativity in blaming 'that flippin' line' for once again
losing the fish.

Ben and Colin are two elderly gentlemen who live in New York State who love going fishing together. They decide to do some 'ice fishing'. Since
neither have experienced it before, Ben suggests that going north into Canada might be a good idea and Colin agrees so off they go. On arrival they find the lake is frozen nicely.

They stop just before they
get to the lake at a little local bait shop and buy all their tackle. Colin comments, 'Hey, Ben, we're going to need an ice pick.'

So they purchase that and stride to the lake. After about two hours, Colin
returns to the bait shop saying, 'We're going to need another dozen ice picks.'

The shopkeeper is surprised and wants to ask some questions, but he doesn't. He sells the fisherman the picks, and the old boy
leaves.

About an hour later hour, Ben arrives at the shop, 'We're going to need all the ice picks you've got.'  The bait man can't stand it any longer. 'Say man,' he asks, 'how are you two fellows doing?'

'Not very well at all,' mutters an irritated Ben, 'We haven't even got the boat in the water yet.'

A father and son go fishing one summer day. While they are
out in their boat, the boy suddenly becomes curious about the world around him. He asks his father, 'Dad, how does this boat float?'

A little later, the boy
looks at his father and asks, 'Dad, how do fish breath underwater?'
Once again the father replies, 'Don't rightly know son.'

A little later, the boy asks his father, 'Dad, why is the sky blue?'
Again,
the father replies, 'Don't rightly know son.'

Finally, the boy says to his father, 'Dad, do you mind my asking you all of these questions?'
The father replies, 'Of course not, son. If you don't ask
questions, you never learn nothin'.

Dylan and Charlie are talking about fishing. Charlie says emphatically, 'I am never going to take my wife fishing with me ever again, Dylan!'

'Yeah, she did everything wrong, got nothing right. She talked too much, made the boat rock constantly, tried to stand up in the boat, baited the
hook wrongly, used the wrong lures and worst of all she caught more fish than me!' bellows Charlie.

Footnote:
Please send Will and Guy your favourite
hunting, fishing and shooting jokes.