Here is a Select of Will and Guy's Funny Fishy Stories 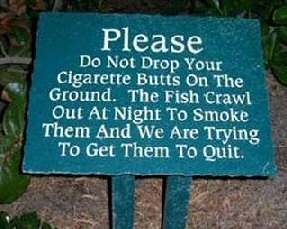 'Many men go fishing all of their lives without knowing that it is not fish they are after.'  Henry David Thoreau

Alex had a terrible day fishing on the lake, sitting in the blazing sun all day without catching a single one.  On his way home, he stopped at the fishmonger and ordered four rainbow trout.  He told the fishmonger, 'Pick four large ones out and throw them at me, will you?' 'Why do you want me to throw them at you?' Asked the salesman?'  So that I am able to tell my wife, in all honesty, that I caught them.' said Alex. 'Okay, but I suggest that you take the salmon.'  Why's that?  'Because your wife came in earlier today and said that if you came by, I should tell you to take salmon.  That's what she'd like for supper tonight', replied the fishmonger with a grin. 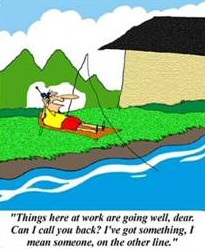 'Do you really believe your husband when he tells you he goes fishing every weekend?'   Asks Vicky's best friend, Myra. 'Why shouldn't I, Myra?' responds Vicky. 'Well, maybe he is having an affair?' comments Myra. 'No way,' laughs Vicky, 'he never comes home with any fish.'

How to Get Really Smart

A customer at Stingray Fishmongers marvelled at the owner's quick wit and intelligence. 'Tell me, Simon, what makes you so smart?' 'I wouldn't share my secret with just anyone, 'Simon replies, lowering his voice so the other shoppers won't hear.' But since you're a good and faithful customer, I'll let you in on it. Fish heads. You eat enough of them, you'll be positively brilliant.' 'You sell them here?' the customer asks. 'Only $4 apiece', says Simon.

The customer buys three. A week later, he's back in the store complaining that the fish heads were disgusting and he isn't any smarter. 'You didn't eat enough, 'says Simon. The customer goes home with 20 more fish heads. Two weeks later, he's back and this time he's really angry. 'Hey, Simon, 'he complains, 'you're selling me fish heads for $4 a piece when I can buy the whole fish for $2. you're ripping me off!' 'You see?' says Simon, 'you're smarter already.' 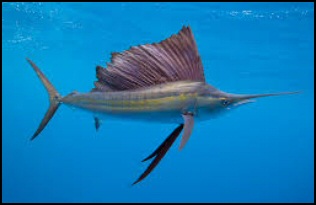 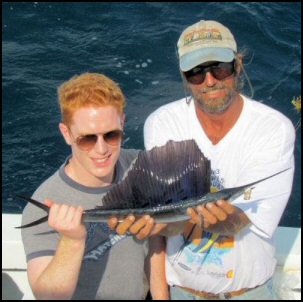 We've never seen a sailfish this small, and neither had Captain Rich of the Southbound Charter in Key West

The Ones That Got Away

After a Tuesday fishing on the River Test, near Southampton in Southern England, Trevor is walking from the pier carrying two brown trout in a bucket. He is approached by a Water Conservation Officer who asks him for his fishing license. Trevor replies to the environmentalist, 'I was not fishing and I did not catch these brown trout, they are my pets. Every day I come down to the water and put these fish into the water and take them for a walk to the end of the pier and back. When I'm ready to go I whistle and they jump back into the bucket and we go home. The officer, obviously, does not believe him and he reminds Trevor that it is illegal to fish without a license. The fisherman turns to the warden and says, 'If you don't believe me then watch, 'and he throws the trout back into the water. The warden says, 'Now whistle to your fish and show me that they will jump out of the water and into the bucket.' The fisherman turns to the officer and says, 'What fish?'

Tish, the world's oldest known goldfish, was 43. In later life, Tish faded from his natural bright orange to a more distinguished silver. His owner said the secret of Tish's long life was not being overfed and being placed in the sun occasionally. He was won at a funfair in Doncaster in 1956 and buried in a yoghurt pot in the garden of his owner's garden in Thirsk, Yorkshire, England in 1999. 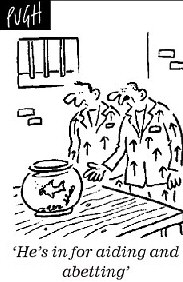 Joan Higgins, aged 66, has been selling pets and fishing tackle for years from her shop in Sale, Manchester, England.  Then one day an officer from the trading standards department decided to lure her into selling a goldfish to an underage boy. The first point about this surreal case is that it does not seem unreasonable for a 14 year old to buy a goldfish.  You can understand the police setting up 'sting' operations for shops selling cigarettes or booze to underage youths, but why are they wasting £20,000 on operations to trap shopkeepers selling goldfish? So far, so bad - but it gets worse, the magistrate fined Mrs Higgins £1,000, presumably as an example to other shopkeepers.  If you are struggling to believe the story up to this point, then you will be incredulous with the sting in the tail, 66 year old Mrs Higgins was told to wear an electronic tag and was made the subject of a curfew order normally reserved for violent repeat offenders.  Why was it necessary in this case? We wonder if Mr Iain Veitch, head of public protection at Trafford Council, is sane when he said: 'Let this conviction send out a message that we will not tolerate those who cause unnecessary suffering to animals. The council will always try to support pet and business owners so that they are able to care for their animals properly, but where they continually ignore the advice they are given, we will not hesitate to use our statutory powers.' In case you are wondering, no animals were hurt in this true story; the goldfish was adopted by an animal welfare officer.

Mrs Baker wanted to go ice fishing. She had read several books on the subject, and finally, after getting all the necessary equipment together, she made her way out onto the ice. After positioning her comfy stool, she started to make a circular cut in the ice. Frighteningly, from up above, a voice boomed, 'There are no fish under the ice.' Startled, Mrs Baker moved farther down the ice, poured herself a large coffee, and began to cut yet another hole. Again, from the heavens, the voice bellowed, 'There are no fish under the ice.' Mrs Baker, now became very concerned so she moved way down to the opposite end of the ice, set up her stool, and began again to cut her ice-hole. The voice rang out once more, 'There are no fish under the ice.' Mrs Baker, stopped, looked upwards and said, 'Is that you, Lord?' The voice replied, 'No, this is the Ice-Rink Manager.'

Ian Welch, an angler from Aldershot, Hampshire, England, has landed a record stingray while fresh water fishing. Ian, a biologist was working on the Mae Klong river, in western Thailand. Will and Guy have learned that this rare giant stingray, weighing 55 stone, took some 90 minutes to land and 13 men to heave it out of the water. Ian commented, 'It dragged me across the boat and would have pulled me in, had my colleague not grabbed my trousers.' The giant freshwater ray is listed as a vulnerable species by the International Union for Conservation of Nature. This particular one was 7ft long and wide, with a tail of 10ft; it had its venomous barb wrapped in cloth on the bank. The ray was placed in a children's paddling pool to allow the marine biologists to take its DNA, tag it and return it to the water. Mr Welch delighted us with his next statement that, 'I was exhausted afterwards. I did very little for the rest of the day - and just had a cold beer.' Lovely!

Angling Is Britain's Most Popular Sport: Now We Know Why! 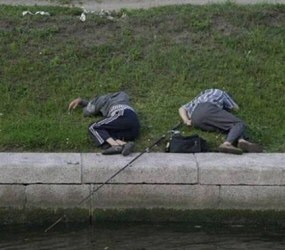 Ones that almost got away: 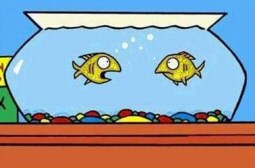 'I broke up with you and you're still hanging around - you are so pathetic!' More Fishy Stories Footnote: Please send us your funny fishy stories.