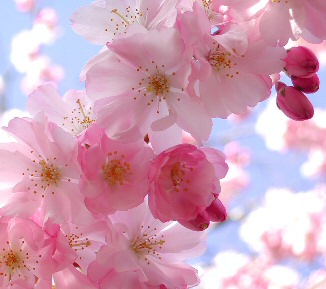 Each year people will travel miles to see a good display of cherry blossom Day. 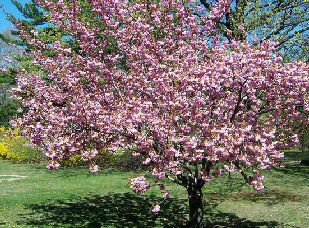 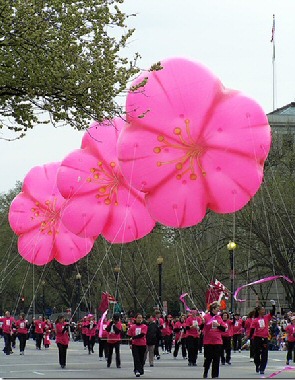 The National Cherry Blossom Festival Parade takes place on the first Saturday in April 4.  Each year the Parade runs along Constitution Avenue from 7th to 17th Streets, NW, and features giant balloons, marching bands, and performers.

Under The Cherry Blossom Tree

It was spring.  There were eggs in every bird's nest, the air buzzed with honeybees, and all at once the cherry trees blossomed.  The peasants forgot their cares in the Japanese village and congregated in the meadow to sing and dance their time away.

Even among this beauty someone was not happy, their miserly landlord sat alone mumbling and grumbling.  As he sat all alone eating a bowl of cherries and glaring at the merry villagers.  Then, quite by accident, he swallowed a cherry pip.  The pip began to sprout, and soon the landlord was the wonder of the village a cherry tree was growing out of the top of his head!  The story of 'Under The Cherry Blossom Tree' is a favorite yarn in Japan.  Here is the book by Allen Say 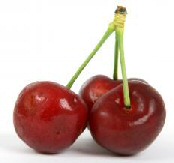 ** The Cherry Pit Spit began in 1974, when Herb Teichman, a Michigan cherry farmer, was looking for "something to do" with cherry pits. Growing from a neighbourhood get-together to an international competition, the Cherry Pit Spit is recognized by the Guinness Book of World Records as an official competition.

Knowing that the Priest was very fond of cherry brandy, one of the church elders offered to present him with a bottle on one consideration: that the pastor acknowledge receipt of the gift in the church newspaper. "Gladly," responded the good man. When the church magazine came out a few days later, the elder turned at once to the "appreciation" column. There he read, "The minister extends his thanks to Elder Lewis for his gift of fruit and for the spirit in which it was given." 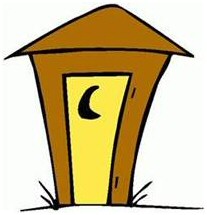 Little Jeremy lived in the countryside.  They had to use an outdoor lavatory, and Jeremy hated it because it was hot in the summer and cold in the winter and smelt rather awful. The offending building was sitting on the bank of a creek and Jeremy determined that one day he would push it into the creek. One day after a spring rain, the creek was swollen so Jez decided today was the day to push the outhouse into the creek. So he got a large stick and started pushing.  Finally, the wooden structure toppled into the creek and floated away. That night his dad told him they were going to the woodshed after supper. Knowing that meant a spanking, Jeremy asked why. His dad replied, "Someone pushed the lavatory into the creek today. It was you, wasn't it son?" Jeremy nodded - Yes Then he thought a moment and said, "Dad, I read in school today that George Washington chopped down a cherry tree and didn't get into trouble because he told the truth. His dad replied smartly, "Well, son, George Washington's father wasn't in the cherry tree."

Paddy and Mick were walking past a wood yard when they spotted a notice which read: "TREE FELLERS WANTED" "That's a shame" says Paddy, "there's only two of us!"

A Poetic View Of Cherry Blossom

Loveliest of trees, the cherry now Is hung with bloom along the bough, And stands about the woodland ride Wearing white for Eastertide. Now, of my threescore years and ten, Twenty will not come again, And take from seventy springs a score, It only leaves me fifty more. And since to look at things in bloom Fifty springs are little room, About the woodlands I will go To see the cherry hung with snow. A. E. Housman, Shropshire Lad, 1887 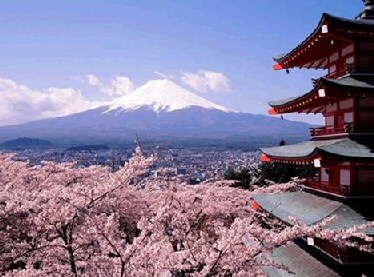 Sakura, Sakura. Noyamamo satomo Miwatasu kagiri. Kasumi-ka kumo-ka.... asahi-ni niou Sakura, Sakura, Hanazakari. Cherry Blossoms, cherry blossoms. On mountains, in villages. As far as you can see. They look like fog or clouds. They are fragrant in the morning sun. Cherry blossoms, cherry blossoms. In full bloom. Cherry blossom time is the season of the year when the whole country of Japan becomes imbued with the spirit of life and hope that is beyond the comprehension of Occidental minds; here the cherry tree is regarded as a principle of life whose snowy wand transforms the earth and gives new powers to the heart which may be shared by all classes from the humblest to the exalted. 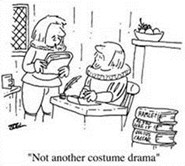