When is Halloween - October 31st?

Wednesday is not the perfect day of the week to celebrate Halloween.  That said, this is just the luck of the draw because unlike May Day, Halloween is not a public holiday.

Origins of the Halloween Date

The date of many ancient festivals centred on the first of the month, for example May Day, and Llamas on the 1st of August.  However, our ancestors showed advanced thinking in starting the celebrations at midnight.  It was not long that they hit upon an even better plan, and that was to start the revelry on the evening before the main festival.  Samhain, a Celtic festival to celebrate the new year on the 1st of November, was particularly susceptible to starting on the eve, that is 31st of October.

With the spread of Christianity in the first millennium, Church leaders emphasised the importance of All Saints day on the 1st of November.  This date was also known as All Hallows and gradually, the name for the night before All Hallows changed to hallow's eve, then hallow e'en and finally Halloween.

**Samhain - In medieval English 'mh' was pronounced 'w', hence: Sow-en.  See more on the History and Origins of Halloween

One for luck: What does a hungry ghost want? Ice scream.

What separates the Halloween witch from sister wicce is her broomstick.  In pagan festivals the broomstick is associated with cleansing and initiation rituals.  It is easy to see how flying could enter the Halloween picture, because this is a time when the spirits were coming down to earth, and also the living were high from eating magic mushrooms and other hallucinogenic potions.  And of course her caldron was handy for witches to brew up spells to control those who offended her; take Shakespeare's Macbeth and the three witches famous refrain: 'Double, double toil and trouble; Fire burn, and caldron bubble'.  See more on witches at Halloween

The Cost of Halloween 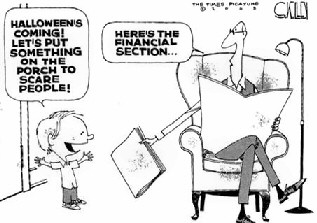 These raw numbers be-fuddle Will and Guy, however we understand the big picture well enough.  At Halloween people spend most on candy and sweets, followed by costumes.  We were surprised that the amount spent on decor has doubled.  This is not due to a dramatic rise in the cost of a pumpkin, more that people are buying battery powered accessories that scream or light-up.

It shows what we know, at first we thought these figures were million, when it turned out on close inspection they were in BILLIONS of dollars.

While Americans spend an average of $72 on Halloween, they spend more on merchandise for Christmas, Mother's Day, Valentine's Day and Easter.  I also find it hard to believe, that even sales for Father's Day cards and gifts outstrip those of Halloween.

One theme that runs through Halloween, is pure fun and self-indulgence.  You don't have to buy presents for friends and relatives, you just by 'stuff' for yourself.

There is no doubt that 'Trick or Treat' has very old roots dating back to the pagan customs surrounding Samhain.  Related customs include wassailing and souling, indeed, in its original form the idea was that the recipients of barnbrack cakes would pray for the souls of the relatives who gave them the 'treat'.

As with many customs Trick and Treat waxed and waned.  During my childhood in the UK of the 1950s and 1960s, I don't remember any organized 'Trick and Treating'.  What seems to have happened is that it has been re-introduced into the UK from America in the 1990s.  These days parents are so paranoid about their children being out after dark and alone, that they now supervise their children's Trick or Treat from the shadows of the nearest lamppost.

Catholic areas in general, and Ireland in particular, favour Trick and Treat, whereas Protestant heartlands celebrate the gunpowder plot on November the 5th.  My point is that this season, Halloween / November the 5th is great time for celebrations based around bonfires and fireworks.  And 'Trick or Treat' is a great ruse to stock up on food ready for the cold night's festivities.  See more on Halloween trick or treat. 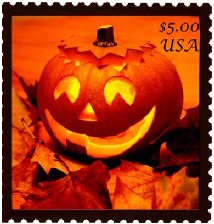 Dates of the Four Fire Festivals

In ancient times the celebration of any festival started the night before, hence Halloween is the evening of 31st October.

2nd Feb Candlemas - Oimelc in Irish.  Celebration of Spring  / 40 days since the nativity.

1st May Beltane - May Day

1st Aug LammasLughnasadh in Gaelic, celebrates the start of the harvest

Footnote:
Please send us your events for Halloween 2012