Stay with this -- the answer is at the end.  It will blow

One evening a grandson was talking to his grandmother about current events. The grandson asked his grandmother what she thought about the shootings at schools, the computer age, and just things in
general.

The Grandma replied, 'Well, let me think a minute, I was born before:

Man had not invented:

Your Grandfather and I got married first, . . and then lived together!  Every family had a father and a mother! Until I was 25, I called every man
older than me, 'Sir'.  And after I turned 25, I still called policemen and every man with a title, 'Sir.'

We were before gay-rights, computer- dating, dual careers, day-care centers, and group therapy.

Our lives were governed by the Ten Commandments, good judgment, and common sense!  We were taught to know the difference between right and wrong and to stand up and take responsibility for our actions.
Serving your country was a privilege; living in this country was a bigger privilege. We thought fast food was what people ate during Lent!

Having a meaningful relationship meant getting along with your
cousins!

Draft dodgers were people who closed their front doors when the evening breeze started!

Time-sharing meant time the family spent together in the evenings and weekends-not purchasing condominiums.

I bet you have this old lady in mind...you are in for a shock!

What Else Was There in Grandma's
Youth? 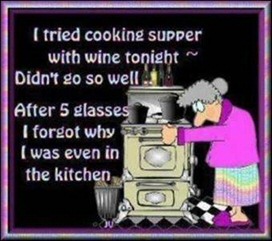 And we were the last generation to actually believe that a lady needed a husband to have a baby. No wonder people call us 'old and confused'
and say there is a generation gap... and how old do you think I am?

Do
You Remember When:

People born before 1946 were called The Greatest Generation.

And people born after 1980 are called - Generation Y.

Why do we pronounce the last group Generation whY?

should I leave home and find my own place?

should I get a car when I can borrow yours?

should I clean my room?

should I wash and iron my own clothes?

should I buy any food?

But a cartoonist explained it very eloquently below ...

One step inside the Austrian pastry shop and I was overwhelmed by the
sweet, spicy scent of bakery goods. My eyes opened wide, my mouth watered,
and my tongue licked my lips in anticipation of biting into a delicious
piece of sugary cinnamon apple strudel.
My mind, however, traveled back
in time.

The kitchen in my memory was huge--but I was small back in the 1940s, so
maybe it really wasn't. I do know it was very colorful; red and yellow tiles
decorated the walls, which made the room warm and inviting, and the
metal-edged table with the accidental cut from my dad's saw was also a
bright red. The white counters were busy with appliances; the stainless
mixer, four-slice toaster, and tin bread box came to mind.

The electric stove was a wonder for the times. Not my mother but my dad
had purchased it; he liked to buy every new gadget. Actually, I hated the
stove. I recalled how sore my hand became from a burn I obtained on it--that
burn hurt worse than when I touched the radiator.

I can't remember if there were curtains on the window over the cast-iron
porcelain sink--maybe because I loved to watch the radiant morning sun
strike the glass in a rainbow pattern of blue, orange, and violet, as it
poked around the enormous ancient oak tree outside. On a hot summer day, a
fuzzy-tailed gray squirrel or a bright feathered bird might be perched on
one of the tree limbs. The window could be opened, so we not only cooled
down, but listened to the sounds coming from the outside world.

Gram, with her silver-gray hair pulled back with bobby pins, her long
pink house dress dotted by tiny little flowers throughout, was busy working
by the time I got up and dressed. I could hear the sound of pots and pans
and the opening and shutting of cabinets as I entered the room.

It was early Friday morning, which was cooking and baking day at our
home, and I was ready. My small wooden cutting board, my petite wood rolling
pin with the red handles, and the pink flowered bowl were sitting at my end
of the table. My little yellow apron with the blue sashes was waiting on the
chair for me. While tying it, Gram pulled me close to her full soft body and
hugged me. She called me "mein kin," which was Yiddish for "my special
child."

At home she always spoke a mixture of English and Yiddish, but when we
were out with strangers she could talk just English. Mom said before Grandma
became an old lady in her 60s she actually wore business clothes and owned a
store where she made dresses and hats. I wouldn't like that grandma. The one
I had now was perfect.

When she smiled at me, I started to laugh because her smooth, white skin
around her mouth was sunken. I knew why. Her teeth were still sitting in a
glass on her dresser. I saw them there. My mom said I shouldn't laugh at
Gram because she sometimes forgot things. I knew her better than mom. She
didn't forget her teeth. She just didn't like wearing them, and she had
stronger gums than anyone in the world.

Tiny, our furry white Pomeranian with the bright black eyes, was
stationed under the table near my chair in anticipation of dropped food--
which usually ended up on his fur, making him sticky, too. He was mom's dog
before I was born, so he was getting slow.
The strudel dough was already
mixed and sitting in Gram's extra-large, white porcelain bowl. I just can't
remember what ingredients made that dough, but I definitely remember what we
did with it--we kneaded it.

Grandma's smooth, soft white hands took a chunk of dough and put it into
my bowl. I climbed up on the metal chair with the wide red vinyl cushion,
and held out my hands for the inspection. Her rule was that I had to have
clean hands before I could help. I remembered to wash them with mom's
special perfumed Dove soap bar before coming into the kitchen. One finger
wasn't sparkling clean because it still had some green paint on it from the
other day when I was helping dad make the summer chairs look like new.

Gram checked behind my ears to make sure the tiny diamond earrings she
gave me when I got my ears pierced were secure. We didn't want to lose one
in the batter like in the book, Homer Price, especially since the earrings
once belonged to her mother.

My dark brown eyes watched Gram work with her dough on the cutting board,
and my hands tried to follow with my portion. First, she pushed the dough
down and out, and then pulled it back. My hands and piece of dough always
became much stickier than Gram's, so I had to add flour on the board, and
stop several times to wash. I had a habit of pushing my black wavy curls off
of my face while my head leaned down so sometimes my hair also became
sticky, and I had to take another break, and sometimes I needed a break to
get some milk to drink, or to go to the bathroom. Gram never needed a break.

Actually, that wasn't entirely true. She did take time to make a glass of
tea. I liked to hear the red tea kettle whistle when the water was boiled
and ready, but I really didn't enjoy drinking tea, even when Gram added a
couple of sugar cubes to it.

The hard part came after the kneading. It was the waiting time. The dough
was put in clean bowls, covered by a cotton cloth, and left to rise. It
fascinated me that something non-living could grow to be twice its original
size.

Grandma watched me closely, because four-year-old me had been known to
sneak a peek under the cloth to see if the dough was ready, even though I
was told to wait until the small hand on the clock reached eleven. I
couldn't tell time well, but I liked the black and white cat clock on the
wall with its bright moving eyes, and long black tail.
While we waited
for the dough to rise, Gram cut the apples. She took her small sharp black
paring knife, and in a quick circular motion the skins on the apples were
made into bracelets for me. Cutting was too dangerous for my little hands,
so mixing the cut apples with the sugar, cinnamon, raisons, flour, and
butter became my job. I managed to nibble on some of the apples and raisins,
while Grandma pretended to not see me doing it.

Finally, the dough was ready and the fun began. Rolling, and rolling, and
rolling the dough was my favorite. "Thin as tissue-paper," Gram kept telling
me. My dough always ended up with holes in it, but we used it anyway.
Covering the apple mix with thin sheets of pastry and putting the concoction
on the cookie tray and into the oven was the last job until the timer button
chimed, and we could feast.

In those days, food and love went together. Women stayed home, cooked,
cleaned, and watched the kids. A woman who also was a good baker was famous
among her family members and neighbors.

My days in the kitchen with Gram were not only a labor of love, but a
chance to master skills that had been passed on through generations, and a
way to learn about my family history. That continues today; my grandchildren
learn to make Great-Grandma Ida's banana cake, Great-Grandmother Edna's
cherries in the snow, and Great-Great-Grandmother Lena's strudel.

My mouth still waters for the taste of that sugary cinnamon apple strudel
Gram and I baked together. I've never tasted strudel that good anywhere, not
even one in this Vienna pastry shop. And I've certainly never at any other
time or place had strudel that was so meaningful as that baked with Gram's
love.