Here are our forecasts for pranks and jokes that you will see on April
Fool's Day 2012.

Will and Guy have searched the internet and read the national and local newspapers thoroughly so as to be able to bring to you the best and the funniest pranks, hoaxes and gags carried out last 1st April 2011.

We hope that you enjoy our selection and if you feel we have omitted your favourite please contact us and we will include it on the site with your name.

An early frisson of excitement was created when the following news was first announced : 'The USA nuclear launch codes are on the White House website'.

April Fools' Day Down Under

We had no idea that Australia celebrated April Fool's day - we should have known better!

The world's first "square" ferris is wheel launched in Melbourne, Australia. Melbourne's Docklands observation wheel is re-opening with a
"revolutionary new design" - a square shaped wheel, it was announced. 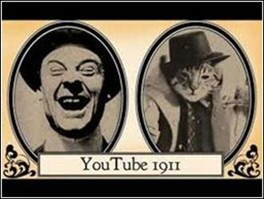 YouTube Travels Back In Time Announcing the celebration of their centenary on April 1st You Tube will be reverting its videos back to what
they would have looked like around 1911, complete with grainy, sepia video footage, no audio tracks (save for piano accompaniment), and title cards in place of the site's normal comments.

While these are last year's pranks, when it comes to April Fool's day we have noticed how history repeats itself.  Another slant on these
amusing events is that we may be able to adapt or impove on the idea and create even more mischief.

For example, a driver navigating his way through East London might be treated to the following sound bite by the SMART system, 'Awright geezer, it's straight on at these lights, innit?' 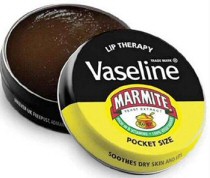 Will was disappointed to find that this Marmite Lip Therapy was a spoof; while Guy was relieved. You really do love it or hate it!

As Usual We Find that Guinness is Right on the Ball

Will and Guy predict a series of double bluffs.  Companies will make announcements that look like April Fool's Day hoaxes, but turn out to be true.  For example, Google launched Gmail on the 1st April 2004. People assumed it was an April Fool's Day hoax, however, when it turned out to be true, Gmail and Google got a second round of free publicity - clever marketing stuff.

DYK (Did You Know)

Pay special attention to any 'Did You Know' articles on April 1st. Such items may be truths, or at least half-truths dressed up as April the
1st spoofs.  These are a new breed of sophisticated double bluffs which marketing gurus cunningly launch on or just before April Fools Day.
Their mission is a maximum amount of free publicity for a real product.

Possible hoaxes include Coca Cola announcing green cans instead of red. Or, new whisky flavoured chewing gum, and they can now breed square apples. One off the stop press.  Pencil sharpeners become extinct in America. 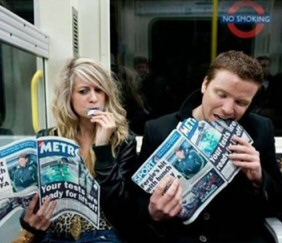 The free British newspaper the Metro claimed that 'newsprint and food experts have combined to cook up a sweet-tasting paper that will soon be sugar-rolling off the Metro presses.' The edible newspapers' printing process sees ingredients such as corn starch, vegetable oil, gum Arabic, water and citric acid cooked into a stodgy paste and thin sheets. Charles Bouquet, of the Edible Paper Company commented to Will and Guy, 'We hope it adds flavour to the stories and presents readers with a colourful menu of current affairs.'

Apparently even celebrity chef and culinary scientist Heston Blumenthal has been involved in the process who described the project as 'a little obsession of mine.'

Will and Guy Reveal that 'Money Does Grow on Trees'

In post war Europe money was tight and while growing up the expression, 'money doesn't grow on trees', meaning that one should be careful how much money one spends because there is only a limited amount was often heard in the streets and homes of Britain.

Thus, Will and Guy are delighted to at last confirm to readers that money, in fact, DOES grow on trees and here is a recent photo to prove the point.

Now as regards the incorrect story circulating amongst the Muslims on the Internet saying that April Fool's Day is the celebration of the kufar over the conquest of Muslim Spain in 1492.

This particular April Fool hoax has a 7 year cycle.  The April 1998 issue of the New Mexicans for Science and Reason contained an article
explaining that the Alabama state legislature had voted to change the value of the mathematical constant pi from 3.14159 to the 'Biblical value' of 3.0.

Which state will change the value for Pi in 2012?  Will and Guy's hot tip is that it will be Idaho.

Beware of being asked to phone an organization and ask for a person with a strange name, for example Myra Manes at a funeral parlour.

Spoof Meetings Will Be a Popular 2012 April Fool's Day Hoax

Here is an example of hoax from CardsChat's 2011 article.  As an aside, beware of any April 1st article with 'lunar' as its theme.

The First Ever Poker Tournament in Space

CardsChat.com, in association with Virgin Galactic, is proud to announce the poker game of the century. Ivey will face off against Negreanu in a match that will make poker history by being played on board the International Space Station (ISS).

Branson, who's Virgin Racing has had sponsorship deals with Full Tilt Poker in the past, is famous for making a splash when it comes to
promotions. "I wanted to do something huge for Virgin Galactic and poker doesn't get any bigger than Ivey and Negreanu. When I heard NASA had some room on the space shuttle the idea for the poker game of the century was born," he told CardsChat.

Virgin Galactic has arranged for Ivey and Negreanu to be carried up to the ISS by the Space Shuttle Atlantis, which will fly its last mission at
the end of June. There they will face off for a whopping $10 million prize pot.  In addition, these poker gladiators will also be fighting for
their respective sites to partner up with Virgin Galactic for the Lunar Poker Tour 2012 which will be held on board the Virgin's SpaceShipTwo.

"There's everything to play for," Ivey told CardsChat. "It's not just about the money, but about what we can do for the game as well."

Negreanu was far more pragmatic. "Imagine running satellites to a tournament that could see you play poker in space. It will be huge!"

TV networks are already clamoring over what could easily be the biggest sporting event of the year. And With the ISS travelling at 17,500
miles-an-hour, this is one poker tournament that could be considered a turbo. Read more at CardsChat

Because of their rigid discipline the army are always a good source of April Fools hoaxes, therefore expect 2012 to be no different.

Watch out for these are sneaky computer jokes that techies with too much time on their hands play on their co-workers.

Other Ideas for 2012 April Fool's Hoaxes

Another rich seam of April Fool's Day hoaxes is discoveries of extinct animals.  Although the Piltdown Man forgery was not unearthed in April, this is the type of fakery to watch out for on April the first.

Finally, when it comes to scientific hoaxes UFOs are never far away. There are more sightings of Martians, little green men, fairies and
other curious creatures on April the first than any other day of the year.

Chinese doctors have identified the human gene which causes Pedaspheraphobia. Symptoms Dr Chang of the Beijing University of Chinese
Medicine and Pharmacology, reports that symptoms of Pedaspheraphobia include vertigo and nausea when ever watching sport.
See more about Pedaspheraphobia here.

Look out for invitations to non-existent events.  These pranks have scope for duping lots of people to turn up in the expectation of an event.  Such hoaxes have reoccurred at regular intervals, ever since the invitation in Victorian England for people to watch the Washing of the Lions at the Tower of London. Crowds really did turn up to this wonderful April the 1st practical joke.

Often the hoaxer enjoys a private joke by using an anagram of April Fool in the person's name or address, for example, Prila Loof or Sallipa
Roof. 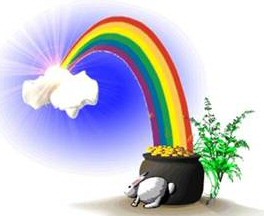 There is a certain type of con that always works on youngsters, part of the reason is that its delivered with a straight face by an authority figure, and secondly because it's something outside their normal experience.

'Hey Junior, go to the stores and get a packet of sky hooks'

At the stores Charlie knows this game well:  'You want sky hooks, go over there and ask Tom if he has any of the "Low cloud" variety left'.

The game within a game is to see how long you can keep Junior running around before he realizes he has been the subject of an April the 1st hoax. It says a lot about the victim's character how well he reacts to be duped. Other variations are a bucket of compressed air, tartan paint, or for the particularly gullible - a long weight (wait).

Also: When I was in air cadets if some newbie was being a pain we'd send him to fetch a yard of shoreline.