The history of Santa Claus criss-crosses the continents.  Almost all cultures can
relate to this kindly man in a red suit who gives children presents.  His
universal appeal is reflected in his many names, Chris Kringle, Father Christmas, Pere Noel and of
course always there in the background is St Nicholas.

Introduction to the History of Santa Claus

The history of Santa Claus could also double as a marketing text book.
Whilst many devout Christians rail against the commercial excesses of
Christmas, they should remember Christ's proclamation: 'Let he who is
without sin should cast the first stone', and look to the founders of their
own churches who absorbed mid-winter pagan festivals such as Saturnalia and
Mithras into Christmas, and thus encouraged people to convert to Christianity.

Yet there is a huge gulf between figures from the Saturnalia of ancient
Rome and the Santa Claus we
see in 21st century New York or London.  Because of the rich
and diverse legends surrounding Santa Claus no one
society can convincingly claim that they conceived this jolly man in red.
It seems that by medieval Europe, most societies independently felt the need to create
a
tradition of present giving, and each culture developed its own folk lore
surrounding the present giver.

Saturnalia was a popular Roman festival, which started on 17th of December
lasted for about a week.  One feature of Saturnalia was that slaves
dressed-up and masters dressed-down as surfs.  Furthermore it is
recorded that Saturnalia was a festival with lots of eating and drinking
- no change there when it became Christmas.  Interestingly, it was also
the custom to exchange presents at this festival.

While I would not wish to diminish the importance and significance of
Christ's birthday, it comes as a bit of a shock to discover that 'Christmas' was not celebrated within living memory
of Christ's death.  Early Christians must have worked out that if
Christ was conceived at the annunciation (March 25th), then his birthday
would have been around 25th December.  However, it was not until
hundreds of years later when smart missionaries wanted a killer
argument to convert people from paganism that they highlighted Christ's
birthday, and annexed the mid-winter pagan festivals into Christmas.

From a commercial point of view, if Christmas did not exist it would
be necessary to invent it. 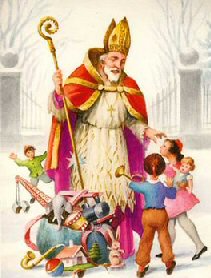 Was the first Santa Claus in history Russian, or Scandinavian?
The answer is neither;
the ancestor all those jolly men bearing sack-fulls of presents was
St Nicholas, who was born in Myra in Turkey probably and died in 347 AD.
The significance of the story of St Nicholas is that it establishes a named
figure as the gift giver.  He died on the 6th of December, and this presents us with a feast day at the very start of the winter festival
season.

St Nicolas' legend itself is that a poor man had three daughters, none of
whom could marry because their father had no money for a dowry.  In the
bleak mid-winter the eldest daughter offered to sell herself in to slavery
so that her two sisters could have a dowry get married, and thus have a good life.  Folklore
chronicles describe how St
Nicholas heard of this sad tale and came to the family's rescue.  In an
act of charity he dropped gold coins down their chimney; as luck would have
it the daughters were
drying their stockings over the dying fire when the three
bags of gold coins landed in a pair of stockings.  And there you have the
legend of the present giver in December and children hanging up stockings.

During the 16th century successive waves of reformists tried, but failed, to stamp out
the gift-bearing traditions of St Nicholas.  Let us now fast forward to
1809, where Washington Irvine took an interest in the Dutch roots of New
York and his research produced the 'Knickerbocker's History of New York'.  Amongst
the topics in his wide-ranging treatise of the early American pilgrims
Irvine writes: 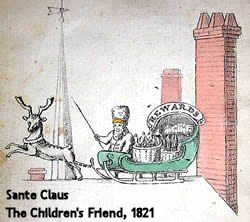 "The good St. Nicholas came riding over the tops of the
trees, in that self-same wagon wherein he brings his yearly presents to
children".

Historians of Santa Claus believe that this was the seed from which the
American version of Santa Claus germinated.  (Mis) pronunciations
resulting in new words is a common theme of the Americanization of English,
and once you hear it, you realise how a Dutchman in New Amsterdam saying 'Sinter Klaas' (St Nicholas) could
become Sainta ...glass, then morph into New Yorker talking about 'Santa Claus'.

By 1921 Sante Claus had arrived in America complete with sleigh and reindeer,
see right illustration from a contemporary book.

The Night Before Christmas

The Night Before Christmas (A Visit from St Nicholas)

He was dressed all in fur, from his head to his foot,
And his clothes
were all tarnished with ashes and soot;
A bundle of toys he had flung on
his back,
And he looked like a peddler just opening his pack.

His eyes-how they twinkled! his dimples how merry!
His cheeks were
like roses, his nose like a cherry!
His droll little mouth was drawn up
like a bow,
And the beard of his chin was as white as the snow;

The stump of a pipe he held tight in his teeth,
And the smoke it
encircled his head like a wreath;
He had a broad face and a little round
belly,
That shook, when he laughed like a bowlful of jelly.
He was
chubby and plump, a right jolly old elf. . . .

Another critical item in the evolution of Santa Clause was the poem
originally called, 'A
Visit from St Nicholas'.  It was written in about 1809 by Henry
Livingston or Clement Clarke Moore, depending on which historian you
believe.

However, the poem was not widely known until 1823 when it was published as 'Twas
the Night Before Christmas', whereupon it became a huge and enduring hit.

In 1863 although the terrible American civil war was at its height, at Christmas time
Harper's Weekly commissioned Thomas Nast to sketch a picture of Santa Claus
with the Union troops.
You can see him distributing presents to soldiers, and in there in the background are
his trusty reindeer, see picture. 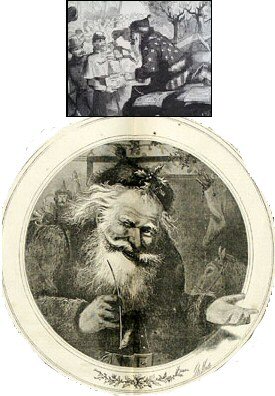 Over the next 20 years Nast went on to sketch Santa Claus in a variety of
poses, and thus provide us with an image of the Christmas present giver.
Many of his biographers comment on how you can see a likeness of Thomas Nast in
his pictures of Santa Claus.

In a recent survey 76% of Americans believed that Coca-Cola was
responsible for creating
Santa's red coat.  However, this is an urban myth.

Haddon Sundblom did indeed create an iconic Santa Claus for Coca-Cola.
Each Christmas from 1931 to the 1960s Sundblom created his distinctive
version of Santa.  The marketing logic was simple, Coca-Cola wanted to
make sure that it had its share of the lucrative
Christmas soft drinks market.  The sub-plot in the history of Santa
Claus is that the image of this jovial present-giving figure that we
associate with Christmas was created by Coca-Cola.

It is interesting to listen to Coca-Cola's own position on the urban myth that they created Santa's red
ensemble.  The company concede that there were Santas in red suits at
least
30 years before Sunblom's first picture.  However, Coca-Cola are happy to
ride on the coat-tails of the myth, and do publicise their part in
developing our image of Santa always wearing a red suit.

Research on the history of Santa Claus's red coat show that in the late 19th century Santa Claus is depicted in a heavy brown coat, just the job for
riding around on a cold winter night. The true origin of Santa in a red coat
probably comes from primitive color printing where the artist's rough
hunting brown coat, became dark red owing to the limited range of colours
available to the printing process. 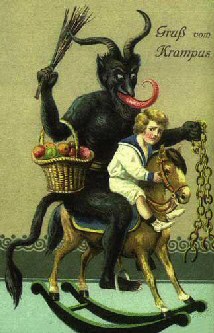 As mentioned earlier, there is no neat single linear evolutionary path
leading to the modern day Santa Claus figure.  What seems to have
happened is that northern European communities, with their long dark
winters, have independently created the legend of a present giving figure
who emerges near the winter solstice.

The Dutch saga of Black Peter highlights an aspect of Christmas presents
that is now overlooked, namely that only good children get a visit from Santa Claus.
Bad children get a visit from Black Peter or Krampus as they call him in
Austria, Bavaria and other central European countries.  While what
Black Peter does varies from country to country, it is never pleasant, often
involves a beating, and was only doled out to children who had been
consistently naughty throughout the year.

Throughout Santa Claus history women have played almost no part in this
present giving role.  It's true there have been a few Mother
Christmases but feminism has not really impinged on this job.  To be
frank Will and Guy would be happy to keep it this way.

To digress, I would like to swim against the tide of political
correctness and suggest that certain responsibilities such as Santa Claus
should be considered
male preserves, just as certain roles are more suited to women.

A trivial example of a chivalrous male role is that
Will and Guy like to open doors for ladies (and other women).  On a
personal level, Guy is also very happy that in his family women still rule in the
kitchen.

Early Christians absorbed pagan festivals in order to make their new
religion a better prospect for missionaries to covert non-believers.  Christmas became established as THE
mid-winter festival.  The legend of St Nicholas established a named
figure as present giver.  America introduced the name Santa Claus,
although other countries still maintain their own names for this figure, for
example Pere Noel or Kris Cringle.  Despite conventional wisdom,
Coca-Cola did not invent Santa's red coat, however their artist Haddon Sundblom
created the modern face of Santa, building on Thomas Nast's 19th century
drawings.

Films Made of Santa Claus

A Vienna city hall spokesman added that Santa
Claus is an English language creation, people who want to see him should go to America where I am sure Coca Cola will be happy to
oblige. 'The Christian origins of Christmas, like the birth of Jesus, have receded into the background. It's becoming more and more a festival that is reduced to simply worldly gifts and commerce.'

Footnote:
Please send us more of your observations on
the history of Santa Claus