Skip to content
Here is our collection of redneck jokes.  All feature hillbillies and many feature the demon drink.

Only a Person in Tennessee could Think of This!

From the county where drunk driving is considered a sport, comes this absolutely true story. Recently a routine police patrol parked outside a bar in Paris, Tennessee. After last call the officer noticed a man leaving the bar so intoxicated that he could barely walk.

The man stumbled around the parking lot for a few minutes, with the officer quietly observing. After what seemed an eternity in which he tried his keys on five different vehicles, the man managed to find his truck and trailer and fall into it. He sat there for a few minutes as a number of other patrons left the bar and drove off. Finally, he got into the car and started the engine, switched the wipers on and off - it was a fine, dry summer night, flicked the blinkers on and off a couple of times, honked the horn and then switched on the lights. He moved the vehicle forward a few inches, reversed a little and then remained still for a few more minutes as some more of the other patrons' vehicles left. At last, when his was the only car left in the parking lot, he pulled out and drove slowly down the road. The police officer, having waited patiently all this time, now started up his patrol car, put on the flashing lights, promptly pulled the man over and administered a breathalyzer test. To his amazement, the breathalyzer indicated no evidence that the man had consumed any alcohol at all! Dumbfounded, the officer said, 'I'll have to ask you to accompany me to the police station. This breathalyzer equipment must be broken.' 'I seriously doubt it', said the truly proud Hillbilly. 'Tonight I'm the designated decoy.'

One day a hillbilly walks into a police station because he wants to get a job as a deputy, which he's wanted to be his whole life. So he goes over to the sheriff's desk and says to the sheriff, 'I'm here to be a deputy.' The sheriff laughs and says, 'Well let's see if you're qualified, son. The sheriff asks him a question and the hillbilly gives him an answer. The sheriff says, 'Close enough.'

The sheriff then asks him, 'What are two days of the week that begin with 'T'?' 'Today and tomorrow,' says the hillbilly. 'Not what I was looking for but I'll give it to ya,' says the sheriff. 'Who shot Abraham Lincoln?' the sheriff asks. The hillbilly just stands there with a blank look on his face. 'Why don't you go home, think about it and come back tomorrow,' the sheriff says to the hillbilly. So the hillbilly goes home and his wife says to him, 'So sweetpea, did you get the job?' 'I think so, they've already put me on a murder case.'

Why are even the best forensic teams unable to catch Hillbillies committing serious crime? Could it be their back-woods cunning?  No. Is it because they are all law-abiding?  I seriously doubt that. The reason they are never caught is that Hillbillies all share the same DNA, and they have no dental records!

George, the bartender, asks the Hillbilly, who is sitting at the bar, 'What'll you have?' Hillbilly answers, 'Ah, I'll have a scotch, please.' George hands him the drink, and says, 'That'll be $4.60,' to which the Hillbilly splutters, 'What are you talking about? I don't owe you anything for this.' Roger, a lawyer, sitting nearby and overhearing the conversation, then says to George, the bartender, 'You know, he's got you there. In the original offer, which constitutes a binding contract upon acceptance, there was no stipulation of remuneration.'

George was singularly unimpressed, so he says to the Hillbilly, 'OK, you beat me for a drink. But don't ever let me ever catch you in here again.' The next day, the Hillbilly again, walks into the bar. George glowers and rasps, 'What the heck are you doing in here? I can't believe you've got the audacity to come back!  'The Hillbilly smiles and says, 'What are you talking about? I've never been in this place in my life!' George looks at the Hillbilly closely and mutters, 'I'm sorry, but this is uncanny. You must have a double.  'The Hillbilly, without missing a beat says, 'Thank you, bartender. Make it a scotch.' 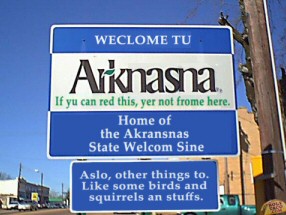 Dearest Redneck Son, I'm writing this slow because I know you can't read fast. We don't live where we did when you left home.  Your dad read in the newspaper that most accidents happen within 20 miles of your home, so we moved.  I won't be able to send you the address because the last West Virginia family that lived here took the house numbers when they moved so they wouldn't have to change their address. This place is really nice.  It even has a washing machine. I'm not sure about it.  I put a load of clothes in and pulled the chain.  We haven't seen them since. The weather isn't bad here. It only rained twice last week; the first time for three days and the second time for four days. About that coat you wanted me to send; your Uncle Billy Bob said it would be too heavy to send in the mail with the buttons on, so we cut them off and put them in the pockets. Bubba locked his keys in the car yesterday.  We were really worried because it took him two hours to get me and your father out. Your sister had a baby this morning, but I haven't found out what it is yet so I don't know if you are an aunt or uncle. Uncle Bobby Ray fell into a whiskey vat last week.  Some men tried to pull him out but he fought them off and drowned.  We had him cremated, he burned for three days. Three of your friends went off a bridge in a pickup truck.  Butch was driving. He rolled down the window and swam to safety.  Your other two friends were in the back.  They drowned because they couldn't get the tailgate down! There isn't much more news at this time. Nothing much out of the normal has happened. Your Favorite Aunt, Mom

A hillbilly farmer from back in the hills walked twelve miles, one way, to the general store.

'Heya, Wilbur,' said Ron, the store owner. 'Tell me, are you and Myrtle still making fires up there by rubbing stones and flint together?' 'You betcha, Ron. Ain't no 'tother way. Why?' 'Got something to show you. Something to make fire. It's called a "match". 'Match? Never heard of it.' 'Watch this. If you want a fire you just do this,' Ron says, taking a match and striking it on his trousers. 'Huh. Well, that's something, but that ain't for me, Ron.' 'Well, why not?' 'I can't be walking twelve miles every time I want a fire and borrow your trousers.' Footnote: If you have a story like the Tennessee Hillbilly joke, please send it to us.