Skip to content
Here are hiking jokes to tell on the trail, or to exaggerate later at the campsite.

These complaints are of the sort that make Will and Guy laugh, sometime out loud.  You just couldn't make them up; yet, on the other hand the things that people moan about are unbelievable.

An orienteer was running along one day when he came to the narrowest part of the River Severn in England. Seeing another orienteer on the other bank, he called out, 'Hey, how do I get to the other side?' The other orienteer, who incidentally came from Wales, looked carefully along the bank to the left, then carefully along the bank to the right, thought a bit, then called back, 'You are on the other side.'

A lawyer invites his cousin from the Czech Republic to come and stay with him in Canada. The Czech cousin arrives, determined to enjoy himself. Soon they decide to go rambling. They're right out in the middle of the forest when a big grizzly bear appears. The bear hugs the poor Czech cousin to death and then eats him. The lawyer runs to the nearest village and tells everybody what has happened. The villagers form a search party and return to the forest. They come across some bears and ask the lawyer to identify the one that killed his cousin. 'It's that male bear over there.' They kill the bear and rip open his stomach, but there is nothing there. They decide to kill the female bear nearby, and when they rip open her stomach, they find the poor Czech cousin. So it all goes to show: 'Never trust a lawyer when he says the cheque is in the mail.' [check; cheque; Czech] 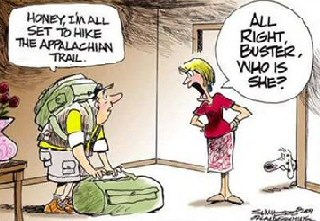 A group of friends went out rambling one day and decided to pair off in twos for the afternoon. That evening one of them returned alone, staggering under the weight of a heavy rucksack. 'Where's Bertram?' the other ramblers ask. Bertram's mate, Ronald, replied, 'Bertram must have had a heart attack. He just keeled over and died a couple of miles back up the path.' The other ramblers gasped and then one of them asked, 'You left Bertram laying out there and carried the rucksack back?' 'It was a difficult decision,' agreed Ronald. 'But I thought that nobody would steal Bertram.'

Two Girls Hiking and a Bear

Anne and Tara, two hikers on a trail came around the bend to find an enormous brown bear about 85 metres up the trail. The bear spots the two girls and begins running towards them at a full tilt. Tara drops her backpack, sits down, throws off her boots, and starts lacing up a pair of running shoes. Anne says to Tara, 'What are you doing? You will never be able to outrun that bear.' Tara replies, 'I don't have to outrun the bear...............................'

Andy was on a walking holiday in the Peak District of England. He became thirsty so decided to ask at a home for something to drink. The lady of the house invited him in and served him a bowl of soup by the fire. There was a little pig running around the kitchen, running up to Andy and giving him a great deal of attention. Andy observed and commented that he had never seen a pig this friendly. The housewife replied, 'Ah, he's not that friendly. That's his bowl you're using.'

The Ten Best Walking Quotations Found by Will and Guy