What do you call a lot of phantoms? A fraid of ghosts!

The Legend of Bride's Head Bridge 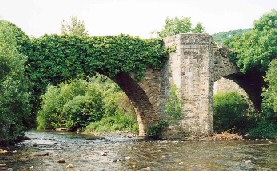 There's a bridge near Hanover in Germany called 'Der Kopf der Braut', which means bride's head.  A 15th century legend has it that Reichsgraf von Kesselstatt and his bride Gretchen were approaching the bridge in their horse and carriage when their way was blocked by an elderly crone. The Reichsgraf or 'Count' ordered the old lady to get off the bridge instantly and make way for their carriage.  But it was dark, and the old lady had difficulty in herding her sheep off the bridge. Because the old witch was moving none to fast, Reichsgraf von Kesselstatt took his whip and have her a sound thrashing. Bleeding, and cowering in a ditch, the old witch put a curse on the carriage.  Consequently when the bridal party eventually crossed the bridge, one of the horses shied and the other reared up.  The upshot was that Gretchen was thrown from the carriage into the river below. It seems certain that she drowned as the river was in torrent and Gretchen was never seen again. However, it is said by Hanoverian wicca that at Halloween you can see a headless bride standing on rocks in the middle of the river.  Some say she is looking for her lost head, while other say she is looking for her beloved Reichsgraf von Kesselstatt.

When I was a boy, each year as the nights began to draw in, my uncle John would tell we kids this Halloween story.  It was a tale about a trick that he played in a graveyard.  One night Uncle John spotted his great friend Eddie weaving his way home from the village pub.  As John watched, he saw Eddie open the church's litch gate and take the shortcut through the graveyard.

There was no doubt that Eddie was the worse for wear, and appeared disoriented, really he should have taken the longer route home via the round ring. But then he cried out to nobody in particular, 'Where am I?' John replied instantly, 'Amongst the living'. 'Where are you?' cried Eddie'; to which John replied in his most sepulchral voice, 'Amongst the dead'. Eddie sobered up instantly, rushed back the way he came, and took the long way around the churchyard.  This time he preferring to go passed the round ring, rather than stay a minute longer amongst the spirits of the gravestones.

There was once a little girl who was very wilful and who never obeyed when her elders spoke to her - so how could she be happy?

One day she said to her parents, 'I have heard so much of the old witch that I will go and see her. People say she is a wonderful old woman, and has many marvellous things in her house, and I am very curious to see them.' But her parents forbade her going, saying, 'The witch is a wicked old woman, who performs many godless deeds - and if you go near her, you are no longer a child of ours.' The girl, however, would not turn back at her parents' command, but went to the witch's house. When she arrived there the old woman asked her: 'Why are you so pale?' 'Ah,' she replied, trembling all over, 'I have frightened myself so with what I have just seen.' 'And what did you see?' inquired the old witch. 'I saw a black man on your steps.' 'That was a collier,' replied she. 'Then I saw a gray man.' 'That was a sportsman,' said the old woman. 'After him I saw a blood-red man.' 'That was a butcher,' replied the old woman. 'But, oh, I was most terrified,' continued the girl, 'when I peeped through your window, and saw not you, but a creature with a fiery head.' 'Then you have seen the witch in her proper dress,' said the old woman. 'For you I have long waited, and now you shall give me light.' So saying the witch changed the little girl into a block of wood, and then threw it on the fire. When it was fully alight, she sat down on the hearth and warmed herself, saying: 'How good I feel! The fire has not burned like this for a long time!' 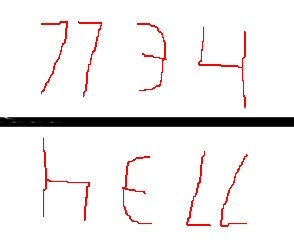 There was a murder in Texas at Halloween, and the FBI were called in to investigate. Hitchcock, one of the officers, saw something written in blood on the wall. It looked like the number '7734', but he was not sure; anyway, he took lots of pictures. When Hitchcock got back to the lab he developed the film of the crime scene, but he still could not make any progress with the number. In the hope of inspiration, he took the sheaf of photographs home and spread them on the dining room table. Just at that moment his 7 year old daughter Emma came in through the patio door opposite, and looked down at the photographs. 'Why have you photographed hell?', she asked, then Hitchcock saw that when held upside down, 7734 spelt: 'hELL'.

Halloween Skeleton for the Doctor

An intern was sent to collect a new skeleton from the central store. When he arrived at the consultant surgeon's office there was already a queue of patients waiting.  As the intern wrestled the skeleton through the outside door he became aware of people gazing at him enquiringly. He gave them a smile and said, 'I am bringing him to the doctor.' An old lady said sympathetically, 'My dear! Isn't he a bit late for the doctor?'

Time for a break from Halloween stories, let us have a few laughs:

'The Pumpkin' by the STORY maKING Mother

...There was once a pumpkin who lived on a farm with a very kind farmer...and a lot of other pumpkins. The farmer was a good man who loved his pumpkins very much, and he always spoke kindly to them. He took good care of them and taught them all how to be good.

The Trip to the Brocken, Germany

Once upon a time there was a young man who was engaged to marry a pretty girl. After a while the bridegroom-to-be became suspicious of his fiancée and her mother. You see, they were both witches. The day came when witches go the Brocken, and the two women climbed into the hayloft, took a small glass, drank from it, and suddenly disappeared. The bridegroom-to-be, who had sneaked after them and observed them, was tempted to take a swallow from the glass. He picked it up and sipped a little from it, and suddenly he was on the Brocken, where he saw how his fiancée and her mother were carrying on with the witches, who were dancing around the devil, who was standing in their midst. After the dance was ended, the devil commanded everyone to take her glass and drink, and immediately afterward they all flew off in the four directions of the wind. The bridegroom-to-be, however, stood there all soul alone on the Brocken, and freezing, for it was a cold night. He hadn't brought a glass with him, so he had to return on foot.

After a long, difficult hike he finally came to his fiancée's. However, she was very angry, and her mother scolded him as well, for having drunk from the glass. Mother and daughter finally agreed to turn the bridegroom-to-be into a donkey, and that is what happened. The poor bridegroom-to-be was now a donkey, and he plodded unhappily from one house to the next, crying a sad 'ee-ah, ee-ah.' A man felt sorry for the donkey, took him into his stall, and gave him some hay. But understandably the donkey did not want to eat, and was driven from the stall with blows. After wandering about for a long time, long-ears finally came back to the house of his fiancée, the witch, and he cried out pitifully. The fiancée saw her former bridegroom-to-be, standing there before her door as a donkey with bowed head and ears hanging down. She regretted what she had done and said to the donkey, 'I will help you, but you must do what I tell you. At a child's baptism, place yourself before the church door and let the baptismal water be poured over your back, and then you will be transformed back into a human.' The donkey followed his fiancée's advice. The next Sunday, a child was baptized, and the donkey placed himself before the church door. When the baptismal service was over, the sexton wanted to pour out the baptismal water, but the donkey was standing in his way. 'Go on, you old donkey!' said the sexton, but the donkey did not yield. Then the sexton became angry and poured the water over the animal's back. Now the donkey was redeemed and was transformed back into a man. He hurried to his fiancée, married her, and lived happily with her from that time forth.

A Long Short Story for Halloween

A Feast at Samhain By Andrew Mitchell