The word pumpkin derives from the Greek word pepon, which means "large
melon".

Picture by pumpkin carver, Noel Dickover, from Centreville, Virginia, USA.
Nick has carved various creative pumpkin designs in the run-up to Halloween,
Will and Guy can reveal.  Shown above is the Star Wars Death Star

The house pictured above is located at Beech Street, Kenova, West
Virginia, USA, and over 3,000 pumpkin carvings were placed in front of this
house.  Gabriel Harding took this picture.  Interestingly, if you
look closely at the front row you can make out that some pumpkins have
Christian symbols carved onto them.

An absolutely amazing feat say Will and Guy.

Most Lit Pumpkins In One Place

However, as with most things, Will and Guy can reveal larger numbers of
pumpkins have been gathered together in one place. For years, the
inhabitants of Keene, New Hampshire, USA, held and routinely set records.

Watch this space to see if this record will be broken.

The
Most Creative Carved Pumpkin Designs From Last Year 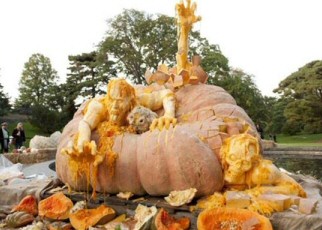 This was passed on to us by another pumpkin called Joe Muise.  We liked
this enough to send it to all the pumpkins in our patch.  Now it's your turn
to pass it to other pumpkins.

Just in case you had forgotten, this is what a real pumpkin
looks like. 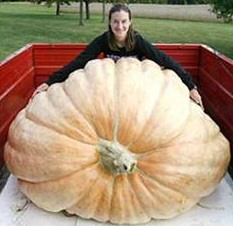 Bavarian Martin Reiss (left) planted the pumpkin at the end of April and harvested it in September when it was 88 days old.  This pumpkin set a new European record for
pumpkins.

Here on the right we see Christy Harp with her 1,725 pound pumpkin to the
Ohio Valley Giant Pumpkin Growers (OVGPG) Giant Pumpkin Weigh-Off on
Saturday, October 3, 2009.   Will and Guy muse, 'what would be the
best use of these giant pumpkins?  Carvings, or pumpkin pie?'

Record Pumpkin in
Time for Halloween 2010 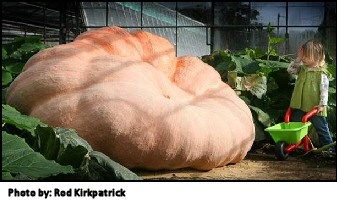 This young lady named Freya realises that she's going to need a much
larger wheelbarrow as she looks at an enormous pumpkin which has already
smashed two records and is set to take on the world record.

For the last six weeks the champion pumpkin has been putting on a
colossal two stone in weight each day; exactly the same weight as
two-year-old Freya, Will and Guy have discovered.

It has a 17 foot circumference and weighs an estimated 1,652 pounds; this
orange monstrosity has already smashed the British and European records for
the heaviest pumpkin after this weekend's official weigh-off the Atlantic
Giant may become the heaviest pumpkin in the world.

The record breaking pumpkin will be star of the show when it is lifted by
fork lift truck on to a pallet to compete head-to-head with other
heavyweights at the Jubilee Sailing Trust Pumpkin Festival in Southampton,
Hampshire on Saturday. 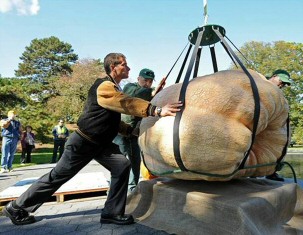 Three of the world's largest pumpkins are on display at the Botanical
Garden through October 31st say Will and Guy.

The secret of making a good savoury pumpkin pie is to use as little pumpkin as possible!  Just retain the shell to give the illusion of a Pumpkin Pie!  Let me explain, pumpkin is pretty tasteless,
thus replace the flesh with your favorite food.

If you like savoury dishes such as rice then make a tasty
risotto, and use it to fill the pumpkin; should your preference be for curry, then stuff the pumpkin with a chicken masala.  For those who like chili - see here for ideas.

Once you have added your favorite dish into the pumpkin shell, cook in the oven as normal.  30 minutes at 450 °F is a good starting point.  Put back in the oven if the dish needs more cooking.
The skill of this technique is to select the size of pumpkin to match the number of people you wish to feed.

For a more traditional cinnamon and ginger Pumpkin Pie, here is a recipe.

Preparing:
Throw the pumpkin into the mixing bowl, add the sugar, salt, spices, and flour.  Crack the eggs; mix well. Add
evaporated milk, water, and vanilla; give it a good stir. Pour into pastry-lined pie pan.

The Fate of
Pumpkin Carvings

It is true that, after we have carved it, most of the pumpkin ends up in
the bin. In fact, in the USA, where Halloween has spawned a multibillion
dollar industry, it is estimated that more than 90% of pumpkins that are
grown are never eaten.

Will and Guy feel that this wastefulness is a pity.

1. Firstly, these gourds are very tasty.  Not many things are more
comforting than a good pumpkin soup.

2. Second, it takes a lot of water,
warmth and, often, pesticides to grow these bulbous beasts - especially if
there is a poor summer.

We have discovered that the smaller varieties offer the best flavour. The
football-sized Jack-o-lantern pumpkins that most of us buy to carve are
usually Howden Fields, Hundredweight or Connecticut Fields. The truly
massive pumpkins grown to show, some weigh up to half a tonne, are Atlantic
Giants, typically. If you want a variety to cook and sculpt, try Jack of all
Trades, Jaspee de Vendee or Baby Bear.

Or perhaps you may choose to use beetroots or turnips to sculpt out the
'souls of the dead', just as the Irish did before emigrants discovered
pumpkins on arriving in the USA.

Once you are finished with the hollowed-out skin, compost it, or do as
Martha Stewart does: cut it into two halves, fill it with seeds and hang up
as giant bird feeders.

Footnote:
Please send us your pictures of Halloween
pumpkin carvings.