We can trace Halloween back to Celtic festivals which celebrated the new year on the 1st of November (not 1st of January).  One thread that runs through all Halloween legends is the belief that the night of October 31st was the time when ghosts of the dead returned to earth.  The ancients name for this festival Samhain** and its role was to mark the boundary between the old year and new. With the spread of Christianity, the Church emphasised All Saints day on the 1st of November.  This date was also known as All Hallows and gradually, the name for the night before All Hallows changed to hallow's eve, then hallow e'en and finally Halloween. **Samhain - In medieval English 'mh' was pronounced 'w', hence: Sow-en.

Compared with our Pagan ancestors, today we trivialise Halloween.  Today in the UK and USA we don't even get a holiday on the 31st of October or the 1st on November, whereas, to the ancient Celts this was one of the 4 most important dates in the year. Druids or ancient priests claimed that on this special Halloween night, they could communicate with the spirits of the departed.  Furthermore, far from being threatening, the ghosts of the ancestors could assist the druids in foretelling what was going to happen in the year that was about to begin.

To appease the spirits of the dead and to encourage them to appear, the Druids arranged for a communal festival on the night before Samhain.  The precise details of the Halloween celebration varied from region to region, and from era to era, but a constant theme is of bonfires and animal sacrifices.  Many Halloween festivals lasted for 3 days. When Christian influences curtailed pagan beliefs, Samhain was replaced with All Saints day on the 1st of November, and All Souls day on the 2nd of November.  This is a classic example of an ancient, essentially pagan festival being taken over and sanitised by Christian beliefs.  Yet, aspects of the ancient festival survive, for example worship of the spirits of the dead of Halloween.

Witches, shaman, sages, witch-doctors, wise women or wicca* appear in many societies.  If you examine the role of witches at Halloween, then it is as hard to separate fact from legend, as it is to separate a witch from her broom. *The plural of wicca is not wiccas, but wiccan. Witches feature in the Bible: Exodus 22:18 'Thou shalt not suffer a witch to live'.  However, it was during the middle ages between about 1400 and 1700, that witchcraft was most enthusiastically persecuted first in Europe and then later in America.  Perhaps the most famous witches' denouement was at the Salem Witchcraft trial of 1692. Interestingly, these days Salem Massachusetts hosts some of the biggest Halloween celebrations in America. What separates the Halloween witch from her sisters is her broomstick.  In pagan festivals the broomstick is associated with cleansing and initiation rituals.  It is easy to see how flying could enter the Halloween picture, because this is a time when the spirits were coming down to earth, and also the living were high from eating magic mushrooms and other hallucinogenic potions.  And of course her caldron was handy for witches to brew up spells to control those who offended her; take Shakespeare's Macbeth and the three witches famous refrain: 'Double, double toil and trouble; Fire burn, and caldron bubble'. See more on witches at Halloween

There is no doubt that 'Trick or Treat' has very old roots dating back to the pagan customs surrounding Samhain.  Related customs include wassailing and souling, indeed, in its original form the idea was that the recipients of barnbrack cakes would pray for the souls of the relatives who gave them the 'treat'. As with many customs Trick and Treat waxed and waned.  During my childhood in the UK of the 1950s and 1960s, I don't remember any organized 'Trick and Treating'.  What seems to have happened is that it has been re-introduced into the UK from America in the 1990s.  These days parents are so paranoid about their children being out after dark and alone, that they now supervise their children's Trick or Treat from the shadows of the nearest lamppost. Catholic areas in general, and Ireland in particular, favour Trick and Treat, whereas Protestant heartlands celebrate the gunpowder plot on November the 5th.  My point is that this season, Halloween / November the 5th is great time for celebrations based around bonfires and fireworks.  And 'Trick or Treat' is a great ruse to stock up on food ready for the cold night's festivities.  See more on trick or treat.

It's almost scary, the money people spend on Halloween say Will and Guy. This year's spending on the holiday will average $70 a person, up from last year's $61.50 and comparable to the $66.54 average spent in 2008. Total consumer spending on Halloween is expected to reach $6.2.billion. The largest item will go fancy-dress costumes on average of $24.97. Americans are expected to spend an average of $21.15 on candy, $19.23 on decorations. We are told that that's a fraction of the $17 billion that Valentine's Day inspires; flowers and diamonds cost more than pumpkins and candy corn, but it's still a considerable amount of cash. Also, it doesn't even include all the alcohol consumed at those crazy costume parties!

The Cost of Halloween in the UK

Britain's recession continues to bite in 2010 as the coalition government make swingeing cuts in all walks of life. However, report Will and Guy, the commercialised side of Halloween appears doing very well in the UK. 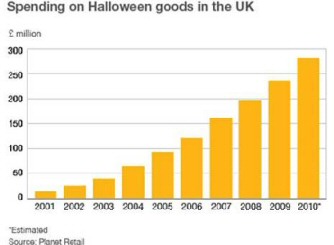 People who do not warm to Halloween's opportunity for ghoulish high jinks may bemoan its ballooning US-style commercialisation, but Planet Retail have told us that UK spending on Halloween goods rose from just £12m in 2001 to £235m last year - a 20-fold increase. We asked ourselves why has Halloween, originally a pagan festival, grown so much in popularity and retail clout? Perhaps the key reason is the fact the supermarkets have massively increased their range and promotion of Halloween goods. Go back 20 years and you could have picked up a toffee apple and pumpkin with your weekly shop before Halloween, but that was about it. Today, the supermarkets have whole aisles of Halloween goods; everything from fancy dress to decorations, toys, games and novelty bakery products.

Halloween Customs Around the World

Ancient Maxmen (natives of the Isle of Man) celibrated Hop-tu-Naa as the Celtic New Year; when summer gave way to winter on the 31st of October. Hop-tu-Naa is a time when people give thanks for the harvest and a time to prepare for the long, cold winter. See more on Hop-tu-Naa

Catholics In Germany and Austria celebrate Seleenwoche between 30th October and 8th November.  Rituals include leaving out bread and drink for spirits of ancestors returning for the night of Halloween. Another strong European superstition is to put away all knives in case they hurt returning spirits, who are unsteady on their feet, or with their flying.  Incidentally the Chinese have a similar superstition about their new year. It is considered particularly unlucky if a black cat crosses your path at Halloween!

In Catholic countries such as Spain and Italy it is All Saint's day that is the focus of the celebration, indeed, the 1st of November is a public holiday.

Much of America has a plentiful supply of pumpkins suitable fore making Jack-o-Lanterns.  Americans have also perfected the art of 'Trick or Treat'.

In Mexico on Los Angelitos (All Saints Day), the whole family visits the graveyard of the deceased relatives, where they have picnic lunches on the graves.  They believe in making Halloween a day of remembrance, happiness and celebration.

In China Halloween is known as Teng Chieh, or 'The Feast of the Hungry Ghosts'.  While the rituals are reminiscent of Halloween, their timing is for the full moon at end of the Chinese New Celebrations in February, rather than at the end of October. The Chinese assemble pictures of departed relatives and place food and drink on the table for their spirits.  Some burn money, their way for paying the price of travel from the netherworld.  Others light bonfires and lanterns is to guide the spirits path back to their former homes. In Hong Kong they have similar beliefs and call their Hungry Ghosts' Festival festival - Yue Lan.  However the Hong Kong celebrations are held at the end of August not the end of October.

1st Nov Samhain  - Nos Galen-Gaeaf in Welsh In ancient times the celebration of any festival started the night before, hence Halloween is the evening of 31st October. 2nd Feb Candlemas - Oimelc in Irish.  Celebration of Spring  / 40 days since the nativity. 1st May Beltane - May Day 1st Aug LammasLughnasadh in Gaelic, celebrates the start of the harvest