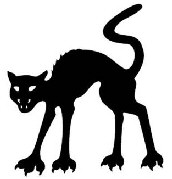 Cats, particularly black cats are symbols of evil, thus they come into
their own on Samhain (All Hallows Eve).

Another Cat Takes Revenge on
the Pumpkin

When is it bad luck to meet a black cat
at Halloween?
When you're a mouse!

A Witch's Familiar - Her Cat 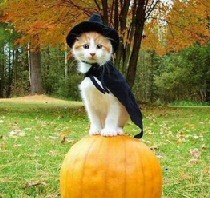 Explaining a witch's 'Familiar' is a complex topic.  It can mean an
assistant, who could help the witch by keeping a lookout, and give
warnings of interlopers.  A familiar can also mean an alter ego that a
witch could change into and thus move around un-detected.  In both of
these roles you could think of familiars as evil spirits.

However cats, particularly black Halloween cats, are the most form of a witch's familiar.
However, they could be other animals such as toads, owls or even mice.
The uglier the beast the more suitable is to be a familiar.

When black cats prowl and pumpkins gleam,
May luck be yours on Halloween.

To appease the spirits of the dead Druids organized a festival
on the night before Halloween.  While the celebrations varied from
country to country, most festivities had bonfires and animal sacrifices.
Although they did not have the elaborate Halloween costumes of today, no
doubt our some of ancestors loved dressing up as much as some people do
today. 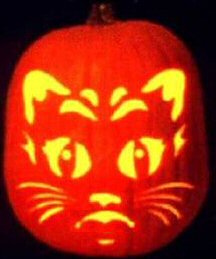 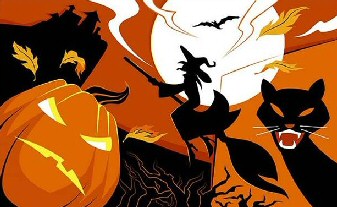 Other variations on the name include:

Once upon a time there were two brothers who lived in a lonely house in a
remote part of Scotland.  An old woman used to do the cooking, and
there was no one else, unless we count her cat and their own dogs, within
miles of them.

One October afternoon the elder of the two, whom we will call Andrew,
said he would not go out - so the younger one, Fergus, went alone to follow
the path where they had been shooting the day before, far across the
mountains.

He meant to return home before the early sunset - however, he did not do
so, and Andrew became very uneasy as he watched and waited in vain till long
after their usual suppertime.

At last Fergus returned, wet and exhausted, but he did not explain why he
was so late.

After supper when the two brothers were seated before the fire, on which
the peat crackled cheerfully, the dogs were lying at their feet, and the old
woman's black cat sitting gravely with half-shut eyes on the hearth between
them, Fergus recovered himself and began to tell his adventures.

'You must be wondering,' said he, 'what made me so late. I have had a
very, very strange adventure to-day. I hardly know what to say about it. I
went, as I told you I should, along our yesterday's track. A mountain fog
came on just as I was about to turn homewards, and I completely lost my way.
I wandered about for a long time not knowing where I was, till at last I saw
a light, and made for it, hoping to get help. As I came near, it
disappeared, and I found myself close to an old oak tree. I climbed into the
branches the better to look for the light, and, behold there it was right
beneath me, inside the hollow trunk of the tree. I seemed to be looking down
into a church, where a funeral was taking place. I heard singing, and saw a
coffin surrounded by torches, all carried by, But I know you won't believe
me, Andrew, if I tell you.'

His brother eagerly begged him to go on, and threw a dry peat on the fire to
encourage him. The dogs were sleeping quietly, but the cat was sitting up,
and seemed to be listening just as carefully and cannily as Andrew himself.
Both brothers, indeed, turned their eyes on the cat as Fergus took up his
story.

'Yes,' he continued, 'it is as true as I sit here. The coffin and the
torches were both carried by cats, and upon the coffin were marked a crown
and a sceptre.'

He got no farther, for the black cat started up, shrieking, 'My stars.
Old Peter's dead, and I'm the King o' the Cats.'

He then rushed up the chimney and was never seen again.