Confused?  Will and Guy Are 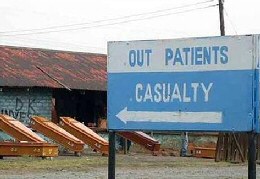 Firstly there is that no right turn 150 yards.  Then there is the arrow
pointing to an entry for the Cemetery Hospital.  How DO you get in?

Then when you get in where do you go?  Out Patients - or Casualty?

I must admit that I have never seen a 'Sleeping Prohibited'
sign, therefore
I deduce that someone has cleverly faked the word
sleeping in the above picture.

John is dying.  However, he can smell his favorite chocolate nut
brownies cooking downstairs.  John summons all the strength that he has
left, he flops out of bed and crawls downstairs.  He sees the brownies
cooling on the counter and staggers over to them.  As John reaches for one,
his wife's wrinkled old hand reaches out, smacks his and she yells:

'No John, you can't have those!  They're for the funeral!'

Your food stamps will be stopped effective March 2013 because we
received notice that you passed away. May God bless you.

You may reapply if there is a change in your circumstances. 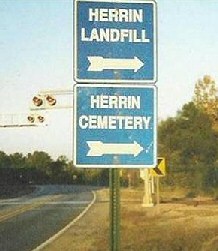 Here lies the body of Jonathan Blake,
Stepped on the gas instead of the brake.

In loving memory of Ellen Shannon, aged 25,
Who was accidentally burned March 21, 1870,
By the explosion of a lamp filled with R.E. Danforth's
Non-explosive burning fluid.

A Cemetery in Ruidoso, Lincoln County, New Mexico, USA, has this:

Here lies
Johnny Yeast
Pardon me
For not rising.

In a Cemetery in Thurmont, Frederick County, Maryland, USA:

Here lies an Atheist
All dressed up
And no place to go.

Found in a cemetery in Albany, New York, USA:

To the Memory of Abraham Beaulieu
Born 15 September 1822
Accidentally shot 4th April 1844
As a mark of affection from his brother.

She always said her feet were killing her but nobody believed her.

When Iris later found that he had left all his money to his mistress, she
attempted to get the mason to change the carving. This proved impossible as
the words had been chiselled by a stonemason and could not be changed.
'In that case,' Iris demanded, 'please add "Until We Meet Again." '

Annie, an elderly Scots lady, lay dying. She looked up and asked her husband
if he would do her just one small favour before she went. 'Fergus,' she asked,
'on the day o' the funeral I'd like ye tae ride in the same coach as ma mother.'

To which Fergus replied, 'A' richt, Annie. I'll dae that tae please ye. But
ye've completely spoilt the day for me.'

I am prepared to meet my Maker. Whether my Maker is prepared for the great
ordeal of meeting me is another matter. - Sir Winston Churchill

I don't speak to my friend Edward any more since he shortened his name -
he's Ted to me now. - Aaron Rice

Anna Wallace
The children of Israel wanted bread
And the Lord sent them manna,
Old clerk Wallace wanted a wife,
And the Devil sent him Anna.

The Worst of Graveyard Humor?

Rodney Dangerfield Says:
My luck is so bad that if I bought a cemetery, people would stop
dying.

Footnote:
Will and Guy often wonder, 'Who are the people
who build these follies?'  'What do they look like?'

Another Dead End?
Inside is Another
Staircase to Nowhere 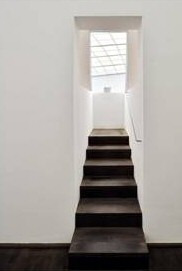 Meanwhile Back Outside We Have Deep Excavations

It wasn't the cough, that carried him off.  It was the coffin they carried
him off in.

Footnote:
Please send us your funny pictures of
graveyard humour.