The Grouse - A Most
Difficult Bird to Cook

Rebecca's mother went to visit a sick relative on the first week of August.
She was still away in the days following the Glorious 12th.  Her father
and brother were hungry and they asked her to cook one of the grouse.

Her mother phoned to see how things were going and recounted her experience
with the grouse to her Mum saying,
'Mum. it was so difficult to eat the grouse.'

'How would I know?' responded
Rebecca, 'it wouldn't sit still.'

Two toffs go out hunting. One has two shotguns.
The second toff asks,
'Why do you have two shotguns?'

The first toff explains, 'I usually miss the first time I shoot. By
taking two I can shoot again.'
The toff pilgrim thinks for a while and
then says, 'Why not just take the second one, and only shoot once?'

As Will and Guy often muse; 'Humour is a fickle
animal'.  Well here is an example of humour that catches you unexpectedly.  The Cormorant Recipe comes from a bygone era: Countryman's Cooking, by W.M.W Fowler circa 1965. 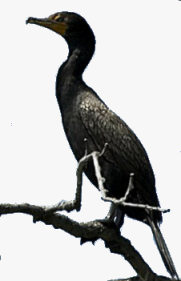 Having shot your cormorant, hold it well away from you as you carry it home; these birds are exceedingly verminous and the lice are said to be not entirely host-specific. Hang up by the feet with a piece of
wire, soak in petrol and set on fire. This treatment both removes most of the feathers and kills the lice.

When the smoke has cleared away, take the cormorant down and cut off the beak. Send this to
the local Conservancy Board who, if you are in the right area, will give you 3/6d or sometimes 5/- for it. Bury the carcase, preferably in a light sandy soil, and leave it there for a fortnight. This is said to
improve the flavour by removing, in part at least, the taste of rotting fish.

Dig up and skin and draw the bird. Place in a strong salt and water solution and soak for 48 hours. Remove, dry, stuff with
whole, unpeeled onions: the onion skins are supposed to bleach the meat to a small extent, so that it is very dark brown instead of being entirely black.

Simmer gently in seawater, to which two tablespoons
of chloride of lime have been added, for six hours. This has a further tenderising effect. Take out of the water and allow to dry, meanwhile mixing up a stiff paste of methylated spirit and curry powder.  Spread
this mixture liberally over the breast of the bird.

Finally roast in a very hot oven for three hours.  The result is unbelievable.  Throw it away. Not even a starving vulture would eat it.